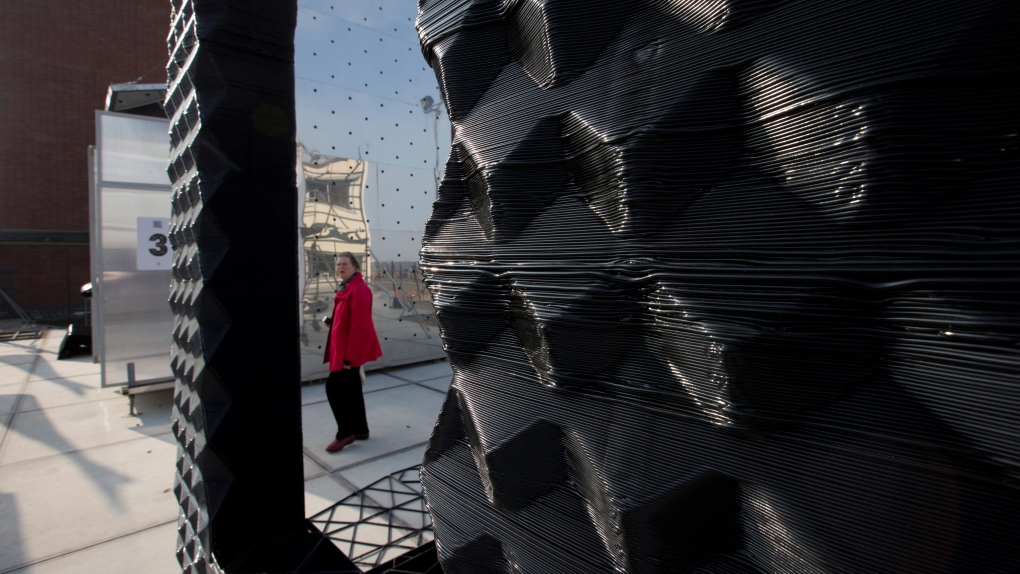 A visitor passes a 3D printer, rear, as she looks at part of a printed canal house, foreground, in Amsterdam, Netherlands, Thursday, March 13, 2014. (AP / Peter Dejong)

AMSTERDAM, Netherlands -- Hundreds of years after wealthy merchants began building the tall, narrow brick houses that have come to define Amsterdam's skyline, Dutch architects are updating the process for the 21st century: fabricating pieces of a canal house out of plastic with a giant 3-D printer and slotting them together like oversized Lego blocks.

Hedwig Heinsman of architect bureau Dus says the goal of the demonstration project launched this month is not so much to print a functioning house -- in fact, parts of the house will likely be built and re-built several times over the course of three years as 3-D printing technology develops.

Rather, it is to discover and share the potential uses of 3-D printing in construction by creating new materials, trying out designs and testing building techniques to see what works.

She envisions a future in which personalized architecture may be custom-crafted on the spot, or perhaps selected from an online store for architectural designs, downloaded and tweaked.

At the core of the project is a 6-meter (20-foot) -tall printer dubbed the Kamermaker, or "room-builder." It's a scaled-up version of the open-source home 3-D printer made by Ultimaker, popular with hobbyists.

It takes the Kamermaker about a week to print each massive, unique, honeycomb-structured block, layer by layer. The first block, which forms one corner of the house and part of a stairway, weighed around 180 kilograms (400 lbs).

The blocks will later be filled with a foam material, still under development, that will harden like concrete to add additional weight and bind the blocks together.

Dus expects to add more printers and change designs along the way, with help from Dutch construction company Heijmans, German chemicals manufacturer Henkel, and anybody else who wants to participate and can make useful contributions.

The construction site in northern Amsterdam is also an exhibition, open to the public for 2.50 euros ($3.00).