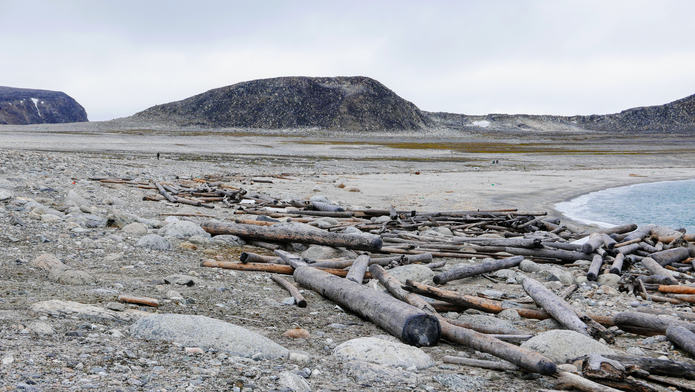 Driftwood on a Svalbard beach is pictured in this undated handout photo. Geoscientist Georgia Hole used tree rings to retrace the paths of driftwood, once frozen in sea ice, as it made its way through the Arctic. Photo Credit: Georgia Hale

TORONTO -- Driftwood found along the shores of northern Svalbard that were once frozen in sea ice offers insight into changes in the ice and Arctic Ocean currents over the last 500 years, according to a new study that traces their journey from boreal forests in the north to the beaches in Norway’s archipelago.

The paper, published in the Journal of Geophysical Research: Oceans, found that fewer driftwood has made its way to Svalbard over the last three decades, a change that underscores just how much sea ice -- an important part of the Arctic ecosystems -- is melting.

The driftwood comes from dying trees -- some from hundreds of years ago -- that fall into the large, high-latitude rivers in North America and Eurasia, which then flow into the Arctic Ocean. The wood can become trapped in the forming sea ice, which allows it to travel along the Arctic currents without sinking, making it an important intermediary for measuring the area of the ocean covered by sea ice.

The oldest Arctic sea ice is only four years old and getting younger, making it challenging for scientists to track and better understand how ice, ocean temperatures and currents have changed over time and what it signals for the future.

The study, by a team of scientists from the U.K., Iceland and Norway, measured the tree ring width of the driftwood samples and compared them to the tree ring widths from trees throughout the boreal forests to determine which country or watershed the driftwood originally came from and what type of tree it was. Scientists were even able to trace some of the driftwood to specific rivers. This allowed researchers to approximate the likely path it took across the ocean.

The results were then compared with sea ice observations from Icelandic fishers, seal hunters and passing ships, dating as far back as the 1600s and more recent data from sources including satellite images, to see if the results correlated.

The study found that older driftwood from 1700 to 1850 came from a wide range of sources -- meaning there was more sea ice carrying the fallen trees from a wider variety of places. As warming temperatures melt the Arctic sea ice, fewer driftwood can be carried in frozen ice across long distances.

“Driftwood deposits on Arctic shorelines form a unique and currently under-utilized resource for the reconstruction of sea ice transport within large-scale Arctic Ocean circulations throughout the Holocene,” the authors wrote in the study.

While using driftwood to study climate change is not new, this is the first study that examines whether it can be used to investigate past currents and ice coverage.

“It’s such a fragile system,” said the study’s lead author, University of Oxford geoscientist Georgia Hole in a statement. “If the sea ice does decline as predicted, then this will kind of be a dying field.”