Dog suffering from separation anxiety? There's now a TV channel for that 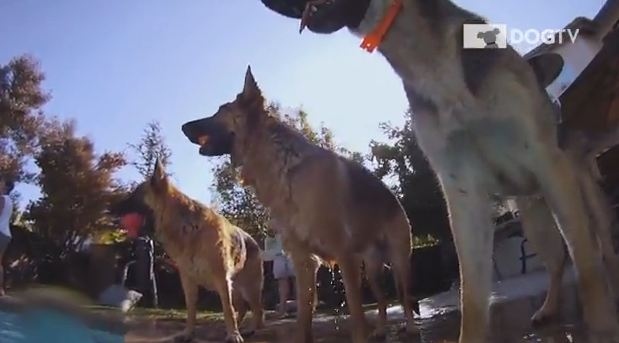 A screengrab taken from a YouTube video shows content on DOGTV, a new specialty channel being launched on Aug. 1. (Screengrab/YouTube)

Is television going to the dogs?

Man's best friend will soon have the opportunity to tune into a 24-hour TV channel designed specifically to keep them company while you're away.

Starting Aug. 1, pet owners will be able to pay for a monthly subscription for DOGTV.

The specialty channel, available through cable or online, offers "dog-friendly" programming which has been scientifically developed to provide the "right company" for dogs who've been left alone, the channel's website says.

The channel will show three types of video segments, each between three to six minutes long, that it says are designed to be relaxing, stimulating or behaviour-improving.

As well, the channel says the programming is compatible with a dog's hearing and vision, with specially tailored colour details, frame rates and angles suited for dogs.

Here is an example of a DOGTV segment that's meant to be stimulating:

Here is a video showing how DOGTV content is adjusted to be suitable for dogs:

Produced by the Israeli-based Jasmine Group, the channel has been developed with the help of a group of veterinarians and pet trainers. It has also been recognized by the U.S. Humane Society.

"The concept of some kind of TV programming that would be scientifically designed for dogs is a terrific idea and one that I would firmly support," Prof. Nicholas Dodman, head of animal behaviour at Tufts University, says in a video clip on the channel's website.

"I would see DOGTV as something where we would engage all the known scientific facts about how dogs see, how dogs hear, how dogs think (and) what interests them."

But Prof. Lee Niel, from the Ontario Veterinary College at the University of Guelph, told CTVNews.ca that the idea of a TV channel for dogs is not that simple, because it is not yet clear how dogs perceive various types of stimuli.

In an email, she notes that while dogs will respond to auditory stimuli on TV, it is less clear how they respond to visual stimuli.

"While there are some recent studies showing that dogs can detect images on a newer type of television screen, we don't know if they are actually able to comprehend these types of 2-D images," she says. "So they can see them as something, but we don't know if the image actually makes sense."

"Some dogs do seem to respond to TV images, while others do not, but even in those that do respond, we don't know why they are responding," she says.

Niel, who is not familiar with DOGTV, says she isn't aware of any scientific evidence showing that TV is specifically beneficial to dog welfare. However, she says it's not impossible.

"I suppose if a dog is actually engaged by the TV programs in a positive way, it has the potential to be beneficial by providing stimulation, but I wonder how many dogs this will actually apply to," she said.

Niel stresses that even with a specialty channel designed just for canines, TV is not an equivalent substitute for actual human or canine companionship and engagement.

"There are other types of stimuli and enrichment that are probably better and more consistent in terms of benefit across different dogs," she says. "Things that increase activity and engagement, like treat balls or having dogwalkers come in midday to get them out of the house and be active for a bit."