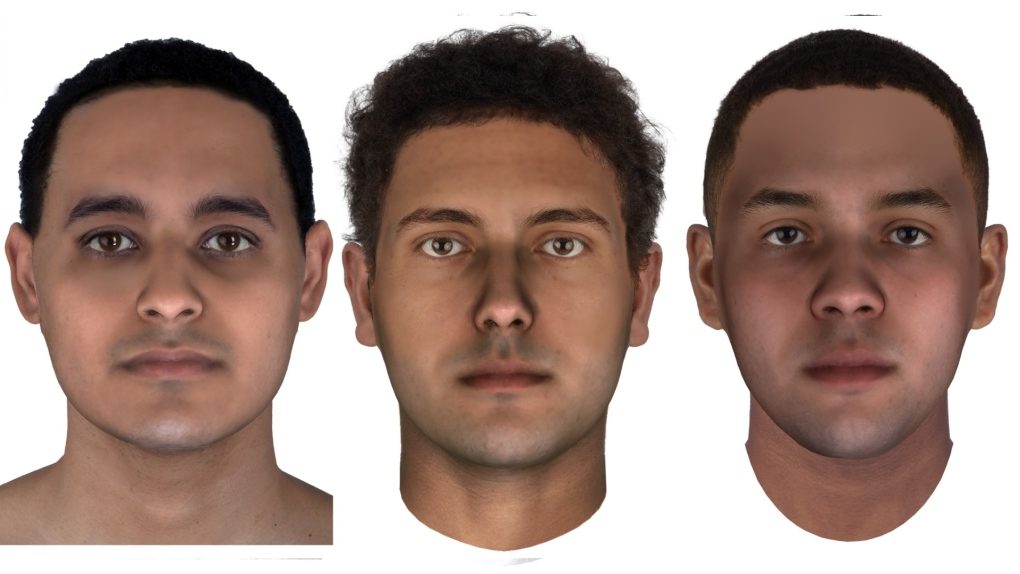 Thanks to DNA analysis, researchers have been able to generate 3D facial reconstructions of three Ancient Egyptian mummies -- named JK2911, JK2134 and JK2888 from left to right. (Parabon NanoLabs)

TORONTO -- DNA researchers have given us a glimpse of what Ancient Egyptians may have looked like.

Researchers from Parabon NanoLabs, a Virginia-based DNA technology company, have created 3D reconstructions of the faces of three men after processing DNA samples from mummies.

The researchers shared their findings at the 32nd International Symposium on Human Identification earlier this month.

Using a process called DNA phenotyping, they were able to extract genetic information about the men's physical characteristics and ancestry to generate 3D models of what they may have looked like when they were around 25 years of age.

The researchers found that the three men were primarily of Middle Eastern ancestry, with some Southern European ancestry mixed in. Their ancestry turned out to be more similar to modern Mediterranean and Middle Eastern people rather than present-day Egyptians.

Because the DNA samples were so old, some key genetic information was missing or damaged, so the researchers had to make a few predictions to fill in the gaps. The samples were missing the genetic information associated with eye colour and hair colour, so researchers applied dark brown hair and eyes -- the most common hair and eye colors in the Middle Eastern population.

Much of the genetic information for skin colour was also missing, so the researchers similarly predicted that the men had light brown complexions.

"It's great to see how genome sequencing and advanced bioinformatics can be applied to ancient DNA samples," said Ellen Greytak, Parabon's bioinformatics director, said in a news release.

Many police departments around the world use this technology to generate reconstructions when unidentified remains are found. Parabon researchers say it's the first time that such DNA analysis has been done on specimens that are this old.