Deforestation may be at root of Brazil drought 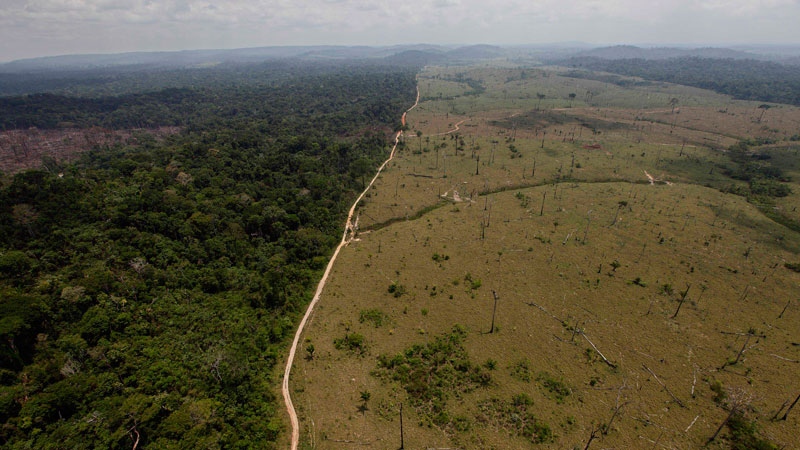 A deforested area is seen near Novo Progresso, in Brazil's northern state of Para on Sept. 15, 2009. (AP /Andre Penner)

SAO PAULO -- Vera Lucia de Oliveira looks to the sky, hoping for any sign of rain.

For weeks, the taps in her home have run dry as Sao Paulo has suffered its worst drought in eight decades, with rainfall at one-third the normal level. Without heavy and prolonged rain, the megacity of 23 million could soon run out of water, experts warn.

But it doesn't, and a growing consensus of scientists believes the answer to what is happening to Oliveria and her neighbors lies not in the sky above their heads but in decades of deforestation of Amazon rainforest hundreds of miles away.

The cutting of trees, scientists say, is hindering the immense jungle's ability to absorb carbon from the air - and to pull enough water through tree roots to supply gigantic "sky rivers" that move more moisture than the Amazon river itself. More than two-thirds of the rain in southeastern Brazil, home to 40 percent of its population, comes from these sky rivers, studies estimate. When they dry up, drought follows, scientists believe.

It's not just Brazil but South America as a whole for which these rivers in the sky play a pivotal meteorological role, according to a recent study by a top Brazilian climate scientist, Antonio Nobre of the government's Center for Earth System Science.

The study draws together data from multiple researchers to show that the Amazon may be closer to a tipping point than the government has acknowledged and that the changes could be a threat to climates around the globe. His work is causing a stir in drought-stricken Brazil as environmental negotiators meet in neighboring Peru at the Dec. 1-12 U.N. climate talks.

Destruction of the Amazon went unchecked until 2008, when the government put teeth in its environmental laws and sent armed agents into the jungle to slow the pace of deforestation by ranchers, soy farmers and timber speculators. The impact was quick: Destruction in 2012 was one-sixth of what was recorded eight years earlier, though it has ticked up in the last two years.

But Nobre and other scientists warn it's not enough just to slow the pace of destruction - it must be halted.

"With each tree that falls you lose a little bit more of that water that's being transported to Sao Paulo and the rest of Brazil," said Philip Fearnside, a professor at the Brazilian government's National Institute for Research in the Amazon who was not part of Nobre's study. "If you just let that continue, you're going to have a major impact on the big population centers in Brazil that are feeling the pinch now."

Earlier this year, researchers at the University of Minnesota highlighted two "once-in-a-century-level droughts" occurring in 2005 and 2010 in the region, in a peer-reviewed study in the Journal of Climate. They used climate simulations to find that deforestation "has the potential to increase the impact of droughts in the Amazon basin."

The sky rivers are generated by the forest acting as a massive pump, according to research that has shown the jungle's uniform humidity consistently lowers atmospheric pressure in the Amazon basin. That allows it to draw moist air currents from the Atlantic Ocean much farther inland than areas that don't have forests. Those currents travel west across the continent until they hit the Andes mountains, where they pivot and carry rains south to Buenos Aires and east to Sao Paulo.

The trees pump an estimated 20 billion metric tons of water into the atmosphere every day - 3 billion more than what the Amazon river, the world's largest, discharges into the ocean.

Recent research indicates rainfall has decreased downwind of deforested areas. The fewer the trees, the less humidity there is in the Amazon basin, making its "pump" effect weaker.

Nobre's October report warned of the crucial need to replant one-fifth of jungle areas that were razed. In addition, 310 million acres, an area twice the size of France, have been degraded by patchwork destruction and need to be restored.

"We're like the Titanic moving straight toward the iceberg," Nobre said in a telephone interview.

The government is preparing a study to measure the impact deforestation has had over recent decades, Environment Minister Izabella Teixeira said in an interview.

The issue is a complex one tied to local problems and the government's own drive to develop the Amazon region, home to nearly 25 million people. Teixeira said the trick is finding the balance, to be able to use the jungle to benefit the population without destroying it in the process.

However, Nobre's report calls on the government to take more urgent action and to aim for zero deforestation. It also calls on Brazilians to influence the government's approach to the Amazon, noting that "the shock of dry taps here, flooded cities there, and other natural disasters must surely provoke a reaction."

Taps have been dry for several weeks in Itu, a community 60 miles northwest of Sao Paulo, where residents are feeling the drought more than anywhere else. Water is so scarce that supply trucks have been hijacked at gun point.

"We are very scared," said Ruth Arruda, an elementary school teacher who stopped washing dishes and uses only disposable plates and cups now. "The water simply has nowhere to come from. Nothing is helping concentrate it, and the dams are not storing it well."

On a recent day, Arruda drove herself and her daughter to a community kiosk to fill empty soda bottles with water from a spigot.

On the ride there, she passed rows of homes with signs out front depicting the community's desperation: "Help, Itu Needs Water." In the 1980s, she says, the city chopped down dozens of trees to clear land for big homes for white-collar workers who wanted a quiet community away from Sao Paulo.

"We have to look inward and pay attention to what we have done wrong to our environment," she said.