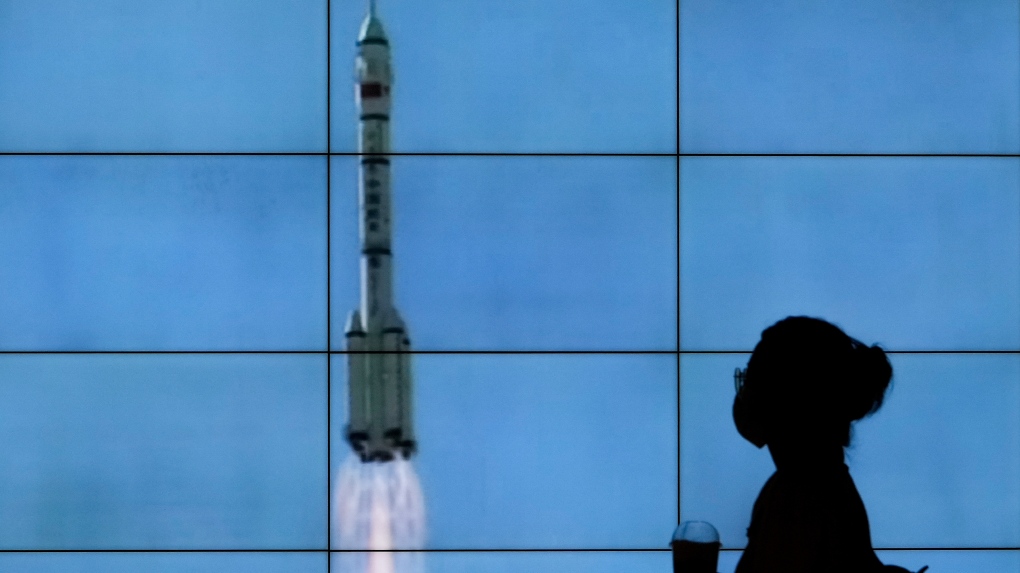 A woman wearing a face mask is silhouetted as she walks by a TV screen showing a live telecast of the Long March-2F Y12 rocket launch in China on Thursday, June 17, 2021. (AP Photo/Andy Wong)

A piece of debris created by Russia's recent anti-satellite test came within striking distance of a Chinese satellite Tuesday, in an encounter the Chinese government has called "extremely dangerous."

The Russian debris came as close as 14.5 meters (approximately 48 feet) from the satellite, according to the Space Debris Monitoring and Application Center of the China National Space Administration.

If a collision did occur, it could've caused a "hypersonic shockwave," said Jonathan McDowell of the Harvard-Smithsonian Center for Astrophysics, who explained "it came close enough that it easily could have hit."

"A piece big enough to be tracked like this, it hits at 12,000 miles per hour, and you get a hypersonic shockwave going through the satellite that reduces it to shrapnel, to confetti," he said.

McDowell however, describes China's assertion the two objects came within such a specific distance as "nonsense because there's no way they can know it that accurately."

Based on publicly available U.S. space tracking data, McDowell says the two objects could have come within anywhere from a few hundred yards to a few inches of colliding.

"The fact that it's still there means it didn't hit, but that's the only way you know that," McDowell said.

Russia destroyed one of its own satellites last November in a direct-ascent anti-satellite missile test which has been condemned by U.S. President Joe Biden's administration as dangerous and irresponsible.

At the time, U.S. Space Command said the test generated "more than 1,500 pieces of trackable orbital debris and will likely generate hundreds of thousands of pieces of smaller orbital debris."

Onlookers urged police officers to charge into the Texas elementary school where a gunman's rampage killed 19 children and two teachers, a witness said Wednesday, as investigators worked to track the massacre that lasted upwards of 40 minutes and ended when the 18-year-old shooter was killed by a Border Patrol team.

As it happened: The 2022 French-language Conservative leadership debate

The Conservative Party of Canada leadership hopefuls debated face-to-face in French, in Laval, Que. on May 25. Recap CTV News reporters' real-time updates as the debate unfolded.