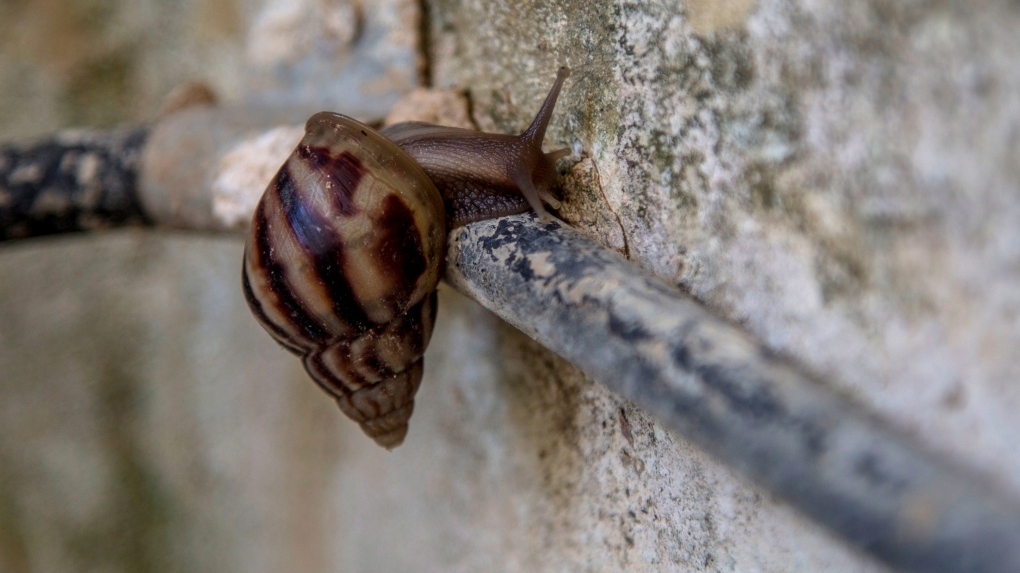 In this Aug. 28, 2019 photo, a giant African snail makes its away along a tube inside a building in Havana, Cuba. (AP Photo/Ismael Francisco)

HAVANA - Silently and without pause, the giant African snail has been invading Cuba.

With their shiny, brilliantly striped shells and bodies up to 8 inches (20 centimetres) long, the snails have become public enemy No. 1 for epidemiologists and citizens have grown to fear their ability to transmit diseases and harm crops.

“I never heard of them before, but now they're everywhere,” said Yusmila Marin, a 29-year-old nurse who lives in a neighbourhood rife with the mollusks, whose scientific name is Achatina fulica.

In recent months, Cuban authorities have activated the nationwide civil defence system to battle the snails. But some say the state's response is inadequate.

Marin and families in the Villa Panamericana neighbourhood are keeping children indoors to play due to the danger of infection from the snails, which can transmit a potentially severe brain infection called meningoencephalitis and an abdominal disease known as angiostrongiliasis.

First detected in Cuba in 2014, the snail can now be found throughout Havana and in almost every one of the island's provinces. It's not known how the snail arrived in the nation.

It is also found in countries around the world, where it has had similar destructive effects.

Health authorities have asked people to collect snails without touching them with their bare hands and then destroy them in sealed containers. But they still say it will take some time to get the infestation under control.

The snail has no natural predators in Cuba and eats fruits, vegetables and even garbage, allowing it to rapidly proliferate.

“It's a health problem, an economic problem and an ecological problem, said Isbel Diaz, a biologist who runs a non-governmental environmental group in Havana.

Diaz said many people were doing their best to help, but without proper training or equipment were not collecting or destroying the snails safely.

“It's a real challenge,” he said. “No country has been able to control this plague and Cuba won't be able to in the short or mid-term.”