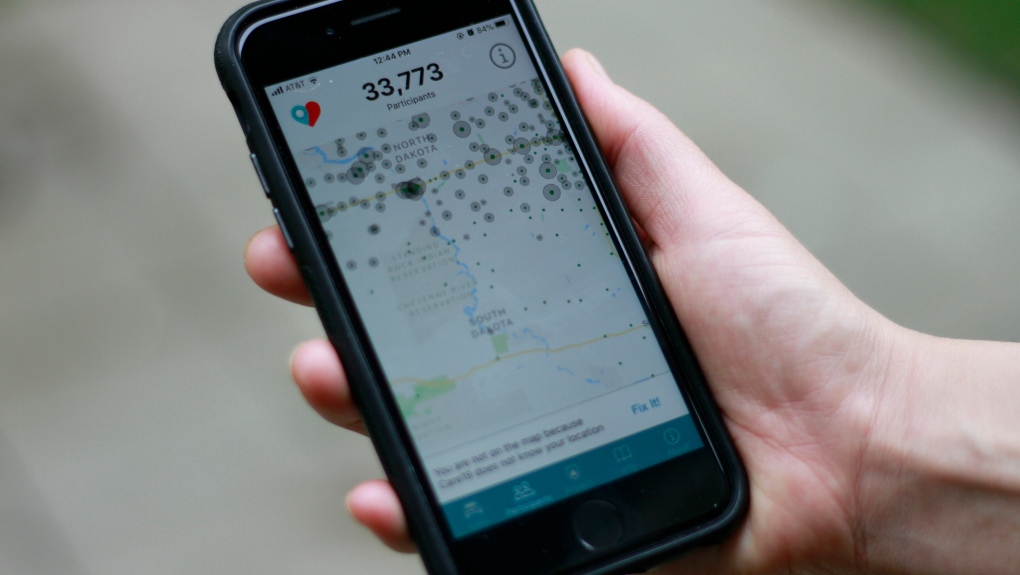 The Care19 app is seen on a cell phone screen, Friday, May 22, 2020, in Sioux Falls, S.D. Care19, a contact tracing app is being pushed by the governors of North Dakota and South Dakota as a tool to trace exposure to the coronavirus. But tech firm Jumbo Privacy points out the app violated its own privacy policy by sharing location and identification information with third-party companies like Foursquare, BugFender and Google. (AP Photo/Stephen Groves)

TORONTO -- Canada is considered one of the top countries in the world when it comes to internet freedom, even as overall digital freedom is experiencing a dramatic erosion globally as a result of the COVID-19 pandemic, according to a new report.

Canada scored 87 out of 100, behind only Iceland and Estonia, on internet freedom in the report published by Freedom House, a U.S.-based research think tank.

The score is based on nine key factors, including whether information and communications technology networks are deliberately disrupted, whether laws or directives have been passed that would increase censorship, punishment or surveillance and restrict anonymity, and whether users have been arrested, imprisoned, physically attacked or killed.

Germany and the U.K. round up the top five, with scores of 80 and 78 respectively. The United States had a score of 76, with the heaviest deduction coming from the report’s measure on violations of user rights.

Canada, which also has a “global freedom” score of 98 out of 100, has one of the most open internet environments in the world, the report said, with most of the population able to access reliable and affordable internet access. Canada also has strong laws in place that allow free expression for users and press freedom, according to the report, which acknowledged the country’s failures and shortcomings when it comes to its Indigenous population and other vulnerable groups.

The Freedom on the Net 2020 report, written by Adrian Shahbaz, Allie Funk and a network of more than 70 researchers, assessed 65 countries and found that internet users in China, which had a score of 10, had the least amount of freedom for the sixth year running. China's crackdown on protests in Hong Kong and the implementation of the sweeping, vague and broadly defined national security law set an example for other countries. The law allows authorities to take action against any kind of speech or expression it considers an offence.

China’s internet controls have inspired countries including Russia to institute regulatory policies that would allow the country to cut off global access during “national emergencies”. Last year, Iran’s government cut off its connection to the rest of the world amid police violence against protestors.

Overall, the report found that government authorities in many parts of the world have restricted the public’s access to information as a result of the pandemic, with some states spreading false or misleading information to suppress and divert attention from their poor handling of the pandemic, placing the blame on marginalized groups, the report says. New technologies, once considered too intrusive, are now being used by some countries under the guise of the pandemic to justify expanding government surveillance powers, in a way that lacks “transparency, independent oversight and avenues for redress,” researchers said.

In many parts of the world, government censorship and crackdowns on free speech have accelerated during the pandemic, preventing users from accessing accurate and factual information, the authors wrote. This access is especially critical for staying informed as well as staying connected during isolation and distancing. But the report found that government authorities have taken actions that put politics above public health, from blocking legitimate websites to completely shutting down internet service for some parts of the population. China’s early coverage of the outbreak in China was heavily criticized due to the government’s effort to control the flow and content of information.

“Moderators censored millions of pieces of content containing over 2,000 keywords related to the pandemic on the leading communication platform WeChat and the live-streaming platform YY, affecting both criticism of the Chinese Communist Party and innocuous questions or observations about the virus,” the authors said, adding that online outlets had strict orders on how and what to report.

Beijing set an example for countries including Bangladesh, Egypt, Venezuela, and Belarus, where news and information were censored or blocked, or governments made false claims about the virus and how to defend against the virus. Zimbabwe enacted a law against “false” information on the pandemic with penalties of up to 20 years in prison, while India and Hungary detained citizens for comments online that question or criticize government policies on the pandemic.

New state powers implemented during emergencies typically do not ease once the original threat has passed, the report warned, pointing to the militarization of law enforcement and the normalization of mass surveillance by governments around the world following the 9/11 attacks.

The surveillance and crackdown during the pandemic is laying a “dangerous foundation” for surveillance state in the future, the report said, noting that many of the changes that give governments more power come with few checks and balances, if any.

Smartphone apps collect biometric and geolocation data to facilitate contact tracing and enforce quarantine requirements, but some of these apps lack proper independent oversights that would safeguard users against abuse by governments and private companies, the authors wrote.

Canada and the United States are among the countries that have launched privacy-by-design contact tracing apps. Privacy by design is a global engineering framework developed by Ann Cavoukian, a former privacy commissioner for Ontario, that incorporates privacy considerations through the entire development process of a technical system.

Canada’s COVID Alert app, for example, is voluntary and is designed to alert users when they’ve been in close contact with a positive COVID-19 case through random codes and does not identify the user or track their location. Privacy experts who have assessed the app says it has met all privacy and security concerns.

But many other countries have taken a different route.

“Police and private companies are accelerating the rollout of advanced technologies to monitor citizens in public, including facial recognition, thermal scanning, and predictive tools,” they wrote. “These systems have been deployed with little scrutiny or resistance.”

Overall, at least 54 countries have introduced smartphone apps that offer minimal protections against abuse. There are dozens of contract tracing apps in China, for example, that collect personal data easily accessible by authorities. With the government monitoring public and online spaces, using big data analysis, contact tracing apps, and facial recognition, the country has the most “comprehensive and draconian approach,” to the pandemic, according to researchers. Data terminals are also installed at high traffic locations including train stations and hotels which collect details on an individual’s movements.

Saudi Arabia has an app that comes with a mandatory bluetooth bracelet for example, and it is reportedly testing a contract-tracing tool created by the same company that provides software to the Saudi government to monitor critics including activists and journalists, like Washington Post’s Jamal Khashoggi, who was killed inside a Saudi consulate in Istanbul in 2018, the authors said.

Sweeping surveillance collection has not been limited to more authoritarian governments either. South Korea’s efforts to contain its outbreak have allowed the government to pull information from credit cards, phone location tracking, and security cameras. The law does come with a sunset clause that requires all pandemic-related data to be immediately destroyed once the “relevant tasks have been completed”.

Even in the U.S., where location data is anonymized and being collected by various levels of government, the authors caution that records can be “deanonymized” when aggregated with other datasets and analyzed through big-data tools.

Policymakers and private sector operators should take steps to ensure a reliable and diverse information space, protect human rights from intrusive surveillance, and promote internet freedom, the authors wrote in a series of recommendations issued as part of the report.

Recommendations include not banning social media and messaging platforms, ensuring all users have equal access to internet, being transparent and fair when moderating content, not to shut down the internet or ban internet services, implementing strong data privacy legislation and laws that would restrict new surveillance technologies, and ensuring that surveillance programs meant to assist with controlling the pandemic meet human rights standards and have independent oversight.

The authors also recommended that policymakers work to include meaningful oversight measures for technology companies, and implement export restrictions on censorship and surveillance technologies.

More broadly, educating the public about digital literacy, raising awareness and conducting research on new surveillance technologies, censorship, how content can be manipulated, how to report false content and letting friends and family be aware as well, are also important components to fostering internet freedom, the report said.

“Civil society organizations should educate netizens about how to spot disinformation and misinformation on social media, addressing topics such as altered content, so-called deepfake videos...inadequate citation,” the authors said.

Other regions in Ontario may revert to modified Stage 2, top official suggests

'Over by Christmas'? Why it's OK that our internal pandemic timelines keep shifting

Tam: Trick-or-treating can still happen -- depending on local rules