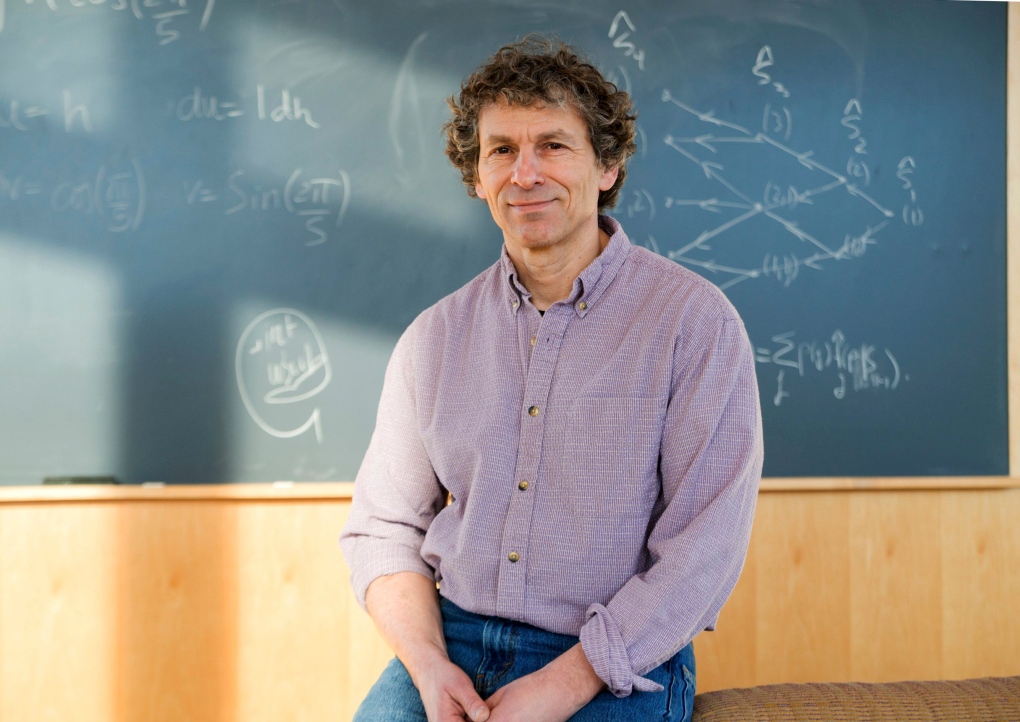 n this Jan. 20, 2015 photo provided by Dartmouth College, Dan Rockmore, director of the Neukom Institute for Computational Science, poses on the Dartmouth campus in Hanover, N.H. Dartmouth is seeking artificial intelligence algorithms that create “human-quality” short stories, sonnets and dance music sets that will be pitted against human-produced literature, poetry and music selections. Rockmore, a mathematics and computer science professor, spun off the idea for the contests from his experience riding a stationary bike. (Dartmouth College via AP)

CONCORD, N.H. -- Can an algorithm pass for an author? Can a robot rock the house? A series of contests at Dartmouth College is about to find out.

Dartmouth is seeking artificial intelligence algorithms that create "human-quality" short stories, sonnets and dance music sets that will be pitted against human-produced literature, poetry and music selections. The judges won't know which is which.

The goal is to determine whether people can distinguish between the two, and whether they might even prefer the computer-generated creativity.

"Historically, often when we have advances in artificial intelligence, people will always say, 'Well, a computer couldn't paint a sunset,' or 'a computer couldn't write a beautiful love sonnet,' but could they? That's the question," said Dan Rockmore, director of the Neukom Institute for Computational Science at Dartmouth.

Rockmore, a mathematics and computer science professor, spun off the idea for the contests from his experience riding a stationary bike. He started thinking about how the music being played during his spin class helped him pedal at the right the pace, and he was surprised when the instructor told him he selected the songs without the help of computer software.

"I left there thinking, 'I wonder if I could write a program that did that, or somebody could?"' he said. "Because that is a creative act -- a good spin instructor is a total artist. It sort of opened my mind to thinking about whether a computer or algorithm could produce something that was indistinguishable from or even perhaps preferred over what the human does."

The competitions are variations of the "Turing Test," named for British computer scientist Alan Turing, who in 1950 proposed an experiment to determine if a computer could have humanlike intelligence. The classic Turing test involves intelligent computer programs that can fool a person carrying on a conversation with it, and there have been many competitions over the years, said Manuela Veloso, professor of computer science and robotics at Carnegie Mellon University and past president of the Association for the Advancement of Artificial Intelligence.

There also have been many efforts to create computer programs that can generate music or text, she said. The Associated Press, for example, recently began using computer programs to automatically generate business earnings reports and plans to do the same for college sports stories.

What sets the Dartmouth contests apart is the evaluation by judges who will try to determine whether the work was generated by computers or humans and whether people prefer the computer-generated work, Veloso said. She said it will be interesting to see who does the judging -- fooling a publisher with a computer-generated short story would be more significant than fooling the average reader, for example.

The contests, dubbed DigiLit, PoetiX and Algorhythms, will run through the upcoming academic year, with prizes awarded in April. For both writing contests, if a computer-generated story or poem is scored as human by a majority of judges, the creators will win $5,000, and a prize of $3,000 will be awarded to the team that enters the best software. In the music contest, six finalists will compete against human disc jockeys during a dance party, selecting music from a list of 1,000 tracks that will be released just before the competition. The prize again will be $3,000.

Both the human DJs and the computers will be hidden from view of the dance floor, Rockmore said.

"Roughly the way we have it imagined is like a 'Wizard of Oz' scenario -- there's a curtain, and there could be someone behind there or not," he said. "Then people will score it, human or machine."

The contests aren't intended to be dismissive of imagination, Rockmore said. Rather, he views them as another way of investigating the neuroscience of creativity and human taste.

"It's a challenge to produce a moving piece of literature, and I think in challenging yourself to try to do it, it makes you think hard about what moves you about a story, what goes into making a story," he said. "Thinking hard about those questions has a long tradition in the humanities, so it's just another way in which we can bring another lens to that, not in order to replace it but just to honestly consider it."