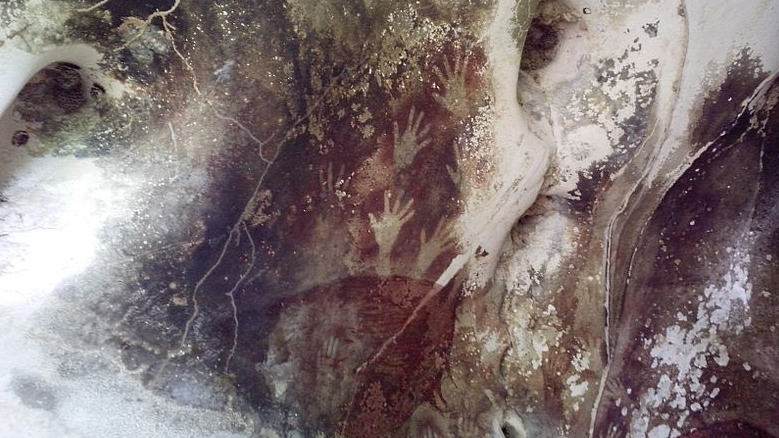 TORONTO -- A new Australian study suggests that climate change may be accelerating the degradation of Indonesia’s ancient cave art.

The art includes the world’s oldest known hand stencil dating back 39,900 years and other paintings made using red and mulberry-coloured pigments in the Maros-Pangkep limestone caves and rock shelters from between 20,000 and 45,000 years ago, according to a press release.

The study, published Thursday in the journal Scientific Reports, examined evidence as to why the Pleistocene-era rock paintings seem to be deteriorating at an accelerated rate in recent decades.

Researchers investigated the potential causes at 11 of the cave art sites by analyzing flakes of rock that had begun to detach from the cave surfaces.

The study found salts in three of the samples, including calcium sulfate and sodium chloride, which are known to form crystals on rock surfaces and cause them to break.

Researchers also found high levels of sulphur at all 11 sites, indicating that possible salt-related rock art degradation is widespread in Maros-Pangkep and may be caused by repeated changes in temperature and humidity during the alternating dry and wet seasons of Indonesia.

The study says these seasonal changes may be accelerated by rising global temperatures and the increased frequency and severity of extreme weather events due to climate change, including El Nino events.

Indonesia has been the site of several devastating natural disasters over the past few months.

A powerful earthquake in January killed dozens on Sulawesi island, severe flooding in February caused more than 1,000 people to flee their homes in Jakarta and West Java, and over 80 people died in flash floods and landslides in April in the eastern region of the country.

Another earthquake, registered at a magnitude of 6.6, also struck Indonesia’s Sumatra on Friday. No official reports on suspected casualties or damages has been released yet.