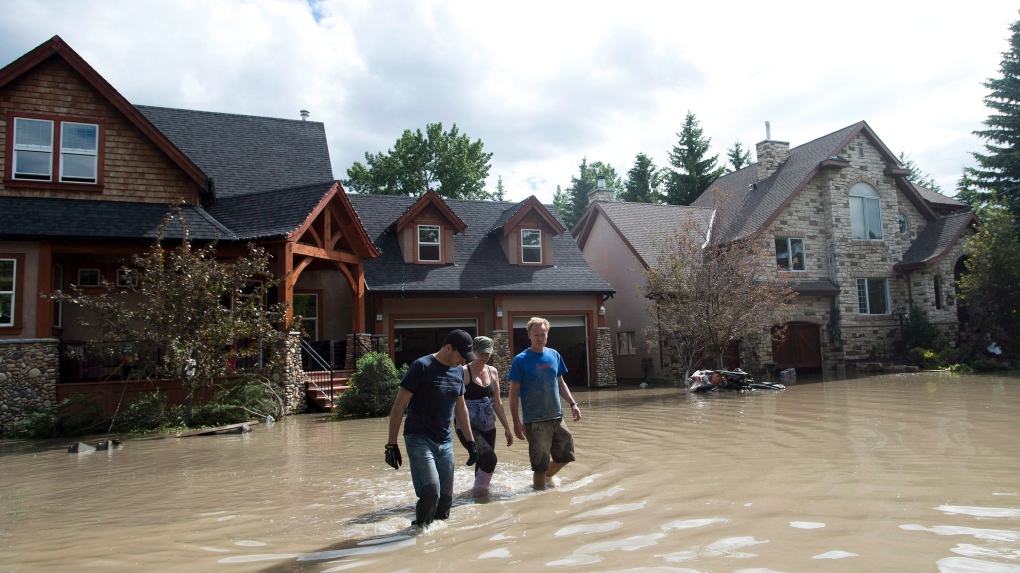 People walk away from flooded homes in Calgary, Alta., on Monday, June 24, 2013. (The Canadian Press/Nathan Denette)

The rains soaked southern Alberta for days, unrelenting, saturating soil already sodden with melting snow -- and before long Calgary was awash as rivers overflowed their banks.

The province described the 2013 flood as the worst in its history, but it might not be for long. Research from Environment Canada shows that climate change is behind more extreme rainfalls in Canada and suggests the problem is likely to get worse.

"If we continue with global warming, we will see continued increase in the frequency and severity of extreme precipitation," said Megan Kirchmeier-Young, co-author of a paper published Monday in the Proceedings of the National Academies of Sciences.

Researchers combined computer models and observed data for the most specific look yet at how climate change affects the kind of damaging rainfalls that turn streets to rivers.

The idea stems from simple physics. Because warm air holds more moisture than cool air, an atmosphere heated by climate change should hold more water and dump larger amounts of it.

Showing that, however, is more complex.

Previous research on extreme rainfall patterns hasn't been able to achieve a finer scale than the average of the entire Western Hemisphere. Now, scientists have been able to focus on regions within the United States and Canada -- what's happening, why, and what's coming down the road.

They began with figures from a variety of locations for the maximum amount of rain falling over a one-day period and over a five-day period.

They did four separate calculations for the probability of those rainfall amounts occurring each year over a 50-year period from 1961 to 2010. Three were based on climate models that incorporated real-world data on increasing greenhouse gas levels, while the fourth was calculated directly from observed figures.

All four calculations showed increasing chances of extreme precipitation. The result from the observed data showed the highest increase, with chances of one-day heavy rainfall increasing by more than five per cent.

"We're finding (that) extreme precipitation increases in the models that have this human influence (greenhouse gases) agrees well with the increases we're seeing in the observations," Kirchmeier-Young said.

Such studies not only help scientists understand the past. Comparing modelled results with real-world measurements increases their ability to look ahead.

"If we have that, we can have more confidence in what the model is telling us what will happen in the future."

All three models in the study showed the chance of over-the-top rainfalls is expected to increase far into the future.

"If we continue with global warming, we will see continued increase in the frequency and severity of extreme precipitation," Kirchmeier-Young said.

The consequences are serious, she added. A one-day deluge can create significant flash floods in an urban area; five-day downpours can swell rivers over their banks -- although river floods are complicated by more factors than just rainfall.

Urban planners, builders and regulators are all going to have to take Canada's coming climate into account.

This report by The Canadian Press was first published June 1, 2020