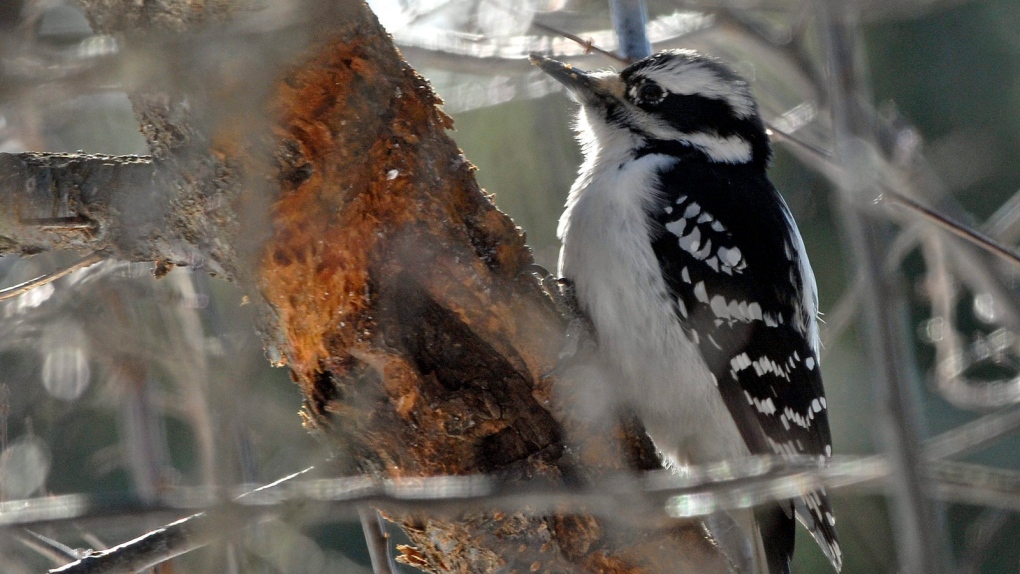 In this photo, a hairy woodpecker rests on a tree at the home of Nancy Castillo and Lois Geshiwlm in Providence, N.Y., Friday, Feb. 11, 2011. (AP / Tim Roske)

EDMONTON -- Environmentalists are trying to connect the dots between the songbirds city-dwellers enjoy at backyard feeders and the need for extensive conservation areas in Canada's boreal forest.

Two international conservation groups have concluded that protecting the breeding grounds of waxwings, warblers and woodpeckers will mean preserving at least half the vast, untouched forest that stretches across the northern end of most provinces.

"Once people hear the story, they're quite captivated by it," said Jeff Wells of the Boreal Songbird Initiative, one of the sponsors of a report released Sunday.

"The idea that this bird in your backyard, especially in a big city, is actually going to go from this urban environment to one of the last big wilderness areas left on Earth, is kind of a cool idea."

That message is gaining traction among people who aren't normally associated with the environmental movement, said Kevin Smith of Ducks Unlimited, the other sponsor.

"As hunters, a lot of the birds they like to hunt and eat, large portions of their populations breed and moult and stage in the boreal," he said. "By conserving those habitats, we're ensuring for our constituency that these birds are flying and there for recreational use through generations."

Environmentalists have proposed ambitious conservation goals for the boreal forest before.

But the new research on 300 species of songbirds that nest in the boreal adds weight to the preservation target of 50 per cent, or about three million square kilometres, of forest between Yukon and Newfoundland and Labrador, Wells said. Unlike seabirds, songbirds don't nest in concentrated colonies and need large, undisturbed areas to keep their numbers up.

"They'll occur in much lower densities over a much broader area," he said. "So if you want to get an area that contains a significant portion of the breeding population, it has to be a very large area."

Between one billion and three billion songbirds are estimated to migrate between the boreal and their winter ranges throughout North and South America, the report says.

Currently, about 70 per cent of the area is untouched and pristine. That gives Canada a unique chance to balance economic development and conservation before conflicts arise, suggested Smith.

"Instead of many other places in the world, where you're managing for endangered species, we have the unique ability to manage for abundance and to preserve some of the great values that the boreal forest provides, along with extracting those resources," he said.

"It's a balance of protection and sustainable development. One of the main things we need to have is healthy northern communities."

Smith said Ducks Unlimited and the Songbird Initiative are working with governments, industry and aboriginal groups on a series of large, interconnected areas with varying levels of protection to conserve bird habitat. One proposed area spans the Thelon region of the Northwest Territories, Thaidene Nene National Park Reserve on the east arm of Great Slave Lake and Wood Buffalo National Park in northern Alberta.

The goal of protecting 50 per cent of the forest will be a challenge, Wells admits. About 12 per cent of the boreal has currently received final approval for protection.

"It's something that is going to take decades," he said.

But it will be worth it.

"To have one place with these huge global linkages, sending out billions of birds that go all around the world and have huge impacts in every one of these nations -- ecologically, economically -- it's a special feature of the boreal."