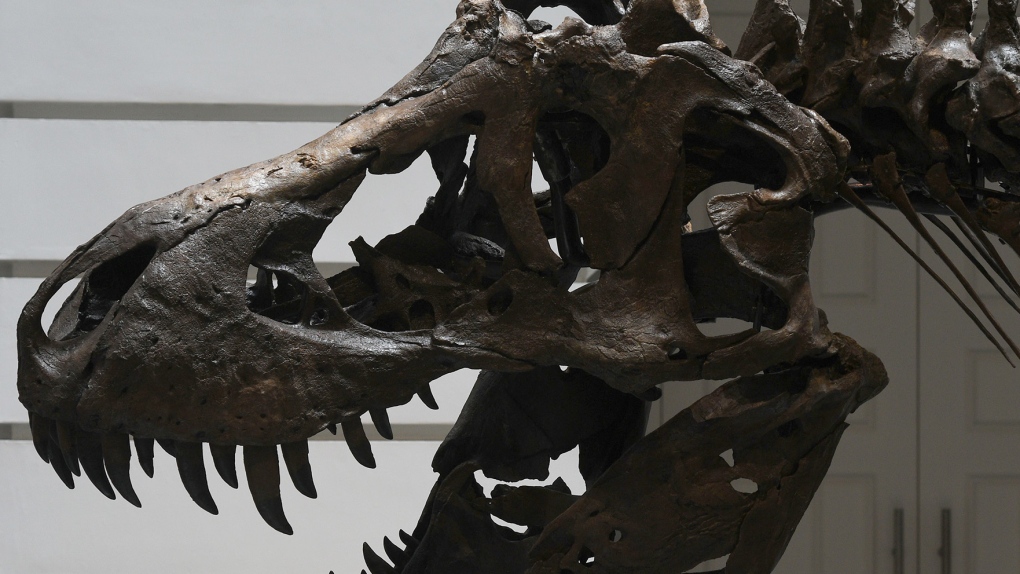 A close-up of the Tyrannosaurus Rex named Shen while on display at the Victoria Theatre and Concert Hall in Singapore on October 28. (CNN-Then Chih Wey/Xinhua/Getty Images)

Christie's has withdrawn a Tyrannosaurus rex skeleton from sale, with just days to go until the historic auction, after a paleontologist said the fossil largely comprises copyrighted replica bones from another specimen.

In a statement provided to CNN on Monday, the British auction house said the unidentified seller will instead loan the skeleton, which is nicknamed Shen, to a museum.

Touted as the highlight of Christie's upcoming Hong Kong sales, Shen was set to become the first T. rex skeleton auctioned in Asia. It was poised to fetch between US$15 million and $25 million, according to auction house estimates.

It is common practice for dinosaur skeletons to be partially reconstructed using casts of other specimens, in addition to original bone, to make them appear whole. But paleontologist Peter Larson, president of the Black Hills Institute of Geological Research in South Dakota, believes Shen was predominantly built with replica parts from a T. rex known as Stan — a skeleton his organization holds intellectual property rights to after selling it via Christie's for a record US$31.8 million in 2020.

"I'd say probably 95% or more is actually Stan," said Larson, who has studied photographs and scans of the skeleton, in a phone interview. "They (Shen's owner)... don't have whole bones, so it's Stan with some little fragments of bone in there."

According to a Christie's press release issued in September, Shen's skeleton is "museum standard." In a since removed page on its website, the auction house stated that the specimen, which measures 43 feet long and 16 feet tall, is 54% complete "based on bone density."

While Christie's declined to address the specifics of Larson's claims or its reasons for canceling the sale, a spokesperson told CNN via email: "There is no T. rex skeleton extant that is entirely made up of original bones. We believe the original elements of Shen are authentic."

The spokesperson added that Christie's "conducts research at the highest standard in the auction business on all objects we offer for sale," and that it "remains committed to the fossil category and to our standards of research and presentation for sale."

The Black Hills Institute, which sells full polyurethane casts of Stan for US$120,000, was concerned that the auction house's catalog listing may be misleading potential bidders. Larson said that buyers who were unaware that Shen contained casts based on Stan would thus be "at risk" of intellectual property conflicts with the organization.

Both Santangelo and Larson told CNN the changes didn't go far enough toward addressing their concerns but added that Christie's had done the right thing by withdrawing the skeleton from auction.

"I do not necessarily blame Christie's for this," Larson said. "They pulled it from the auction, which ... is what they should have done."

Larson said he is in touch with Shen's current owner in order "to make sure this doesn't happen again."

To sell or to study?

Since the first dinosaur auction 25 years ago, sales of large fossils have courted controversy, with experts worried that housing specimens in private collections can make them unavailable for scientific study. Paleontologists have also argued that potential commercial gains discourage landowners from giving professional researchers access to fossil sites.

"In my own opinion, there are only cons," P. David Polly, a professor and chair of the department of earth and atmospheric sciences at Indiana University Bloomington, told CNN earlier this year, when Sotheby's sold the skeleton of a Gorgosaurus, a relative of the T. rex, for just over US$6 million. "While certainly there is no law in the U.S. that supports this for fossils that come off private land, it's easy for me as a scientist to argue that that fossil is important to all of us, and really ought to be going into a public repository where it can be studied — where the public at large can learn from it and enjoy it."

When Shen went on display in Singapore last month, Christie's president for Asia Pacific, Francis Belin, rejected the suggestion that auctioning the skeleton minimized the opportunity for further scientific study.

"Shen itself has been fully digitalized," he told CNN at a press conference. "Every single bone has been digitized in 3D and it will be the decision of the new owner to decide whether this data is being made public or not."

Belin added that fossils sold at auction are often made available to the public, citing the sale of Stan, which will go on display at the new Natural History Museum in Abu Dhabi when it opens in 2025.

Paleontologist Michael Pittman of the Chinese University of Hong Kong had earlier told CNN that Shen would not have hugely significant scientific value.

"In the case of Shen, the sale of the specimen would not be particularly missed by professionals," Pittman said, via email, prior to Christie's decision to pull the skeleton from sale, adding that it "is not a game-changing fossil."

"If there was a global mechanism to ensure extremely scientifically valuable fossils always find public ownership .... that might resolve the issue," he added, citing UNESCO involvement as a possible solution. "Until then, game-changing fossils will continue to be lost to science."

Other T. rex skeletons remain available at auction, with one of the most complete T. rex skulls ever found expected to fetch up to US$20 million when it goes under the hammer at Sotheby's in New York next month. Like Shen, this skull was discovered at the extensively studied Hell Creek Formation, which has yielded more T. rex remains than any other location in the world, according to Sotheby's.