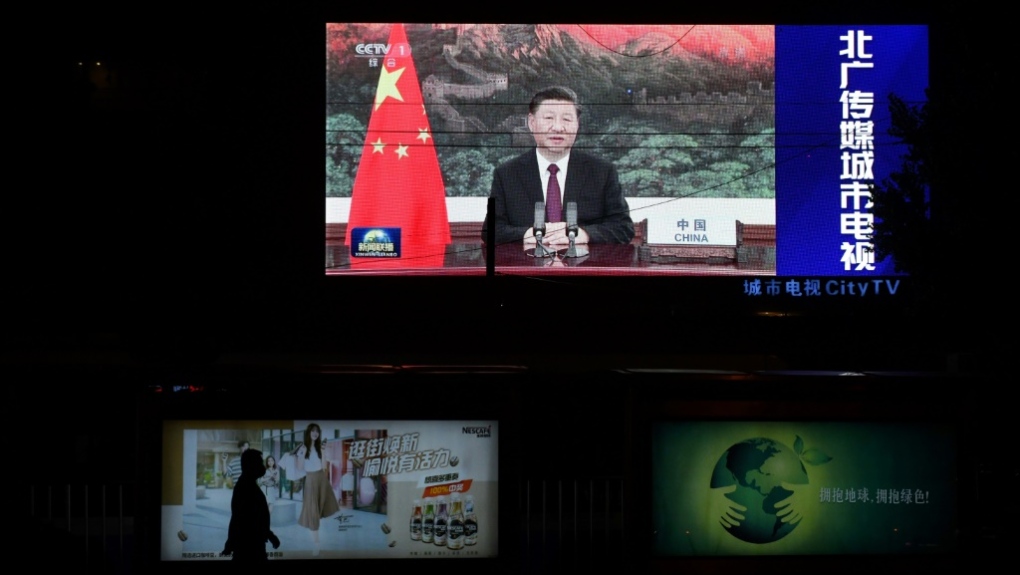 Chinese President Xi Jinping appears on an outdoor screen in Beijing as he speaks by video link at the United Nations General Assembly. (AFP)

UNITED NATIONS -- Chinese President Xi Jinping vowed Tuesday that the world's largest greenhouse gas polluter will peak emissions in 2030 and go carbon neutral by 2060, in what environmentalists hailed as a major step forward.

The goals were the most concrete yet announced by China, which accounts for one quarter of the planet's greenhouse gas emissions blamed for fast-rising temperatures.

In an address to the UN General Assembly, Xi renewed his support for the Paris climate accord and called for a green focus as the world recovers from the COVID-19 crisis.

The Paris accord "outlines the minimum steps to be taken to protect the Earth, our shared homeland, and all countries must take decisive steps to honor this agreement," Xi said in a virtual address.

"We call on all countries to pursue innovative, coordinated, green and open development for all," he said urging them to "seize the historic opportunities presented by the new round of scientific and technological revolution and industrial transformation."

China, in its submission under the Paris accord, said that its emissions would peak "around" 2030.

The European Union had been pushing China to be more ambitious by moving the peak date to 2025, arguing that the five years are crucial as the planet falls behind in fighting climate change.

"All in all, China's announcement is a defining moment that resets the ambition of global climate action," he said.

Faced with poor air quality and rising temperatures, China has moved aggressively to cap coal and move to renewable energies.

The national effort contrasts with the United States, where President Donald Trump has pulled out of the Paris accord negotiated by his predecessor Barack Obama.

Trump called the accord unfair to coal miners and other constituencies, although individual states such as California have kept up their own ambition.