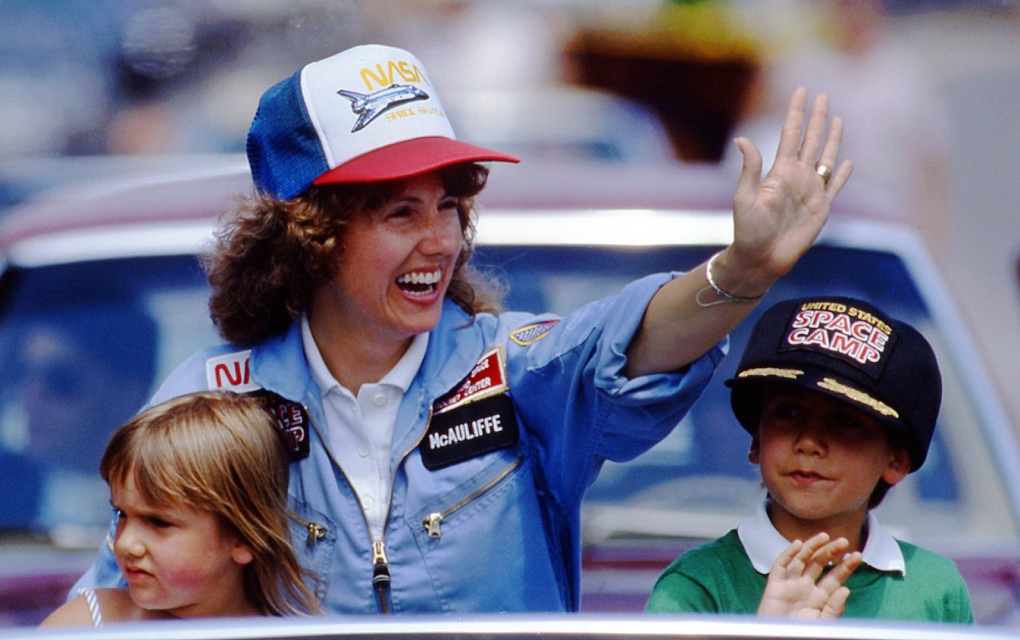 In this 1985 photo, high school teacher Christa McAuliffe rides with her children Caroline, left, and Scott during a parade down Main Street in Concord, N.H. (AP / Jim Cole)

CONCORD, N.H. -- Thirty years after the Concord High School class of '86 watched social studies teacher Christa McAuliffe and six astronauts perish when the space shuttle Challenger exploded on live TV, a number of them have gone into teaching -- and some wonder if, indirectly, the tragedy affected them enough that they wanted to make a difference, as she did.

One of them, Tammy Hickey, didn't like social studies at all, but she enjoyed McAuliffe's law class.

McAuliffe took Hickey and fellow students to courtrooms and conducted mock trials in class. Hickey remembers how personable she was, and how she shared her enthusiasm and experiences when she was in the running to be the first teacher in space. Hickey, now a junior high physical education teacher in Bradenton, Florida, just knew McAuliffe would be picked from more than 11,000 applicants.

"As a teacher now, I know that I want to show respect and show my students that I care," Hickey says. "I can say to emulate how she was, would be a service to these kids for sure."

Hickey joins a number of members of the class of '86 in Concord who became teachers and guidance counsellors in the 30 years since they and other students of all ages nationwide watched with disbelief and horror as the shuttle broke apart 73 seconds after liftoff on Jan. 28, 1986, becoming a generational touchstone.

"I try to be very mindful," says Joanne Walton, who teaches grades four through six in Fairfax, Virginia. She says she sometimes goes through a "What would Christa do?" mantra in her teaching.

"She knew that teaching was way more than just imparting information and that it was really important to know students," Walton says.

Holly Merrow, a math teacher for students in fifth through eighth grades in Camden, Maine, had McAuliffe for American Women in History, a class that McAuliffe created and is still taught at Concord High. She worries people will forget her and her motto: "I touch the future. I teach."

"I hear people use it, and I wonder if they know that it came from her," she says.

Members of the class of '86 have petitioned the Obama administration to have a national holiday named for McAuliffe and the Challenger crew, "to honour Christa and the other astronauts for their ultimate sacrifice." The hope was to reach 100,000 signatures by Friday, but it has fewer than 200 so far.

Concord, a city of about 42,000, built and named a planetarium for McAuliffe, 37 when she died, then later changed it to the McAuliffe-Shepard Discovery Center, recognizing native son Alan Shepard, the first American in space. Just a few years ago, it named an elementary school for her.

The city has been low-key on marking Challenger anniversaries as her family stayed in Concord and her young children, Scott and Caroline, grew up. Today, both are educators with children of their own. Caroline declined to be interviewed, and Scott did not respond to an email.

"The passage of 30 years since the Challenger accident is not of great personal significance to our family," their father and Christa's widower, Steven McAuliffe, said in a statement. "For us, Challenger will always be an event that occurred just recently. Our thoughts and memories of Christa will always be fresh and comforting."

McAuliffe, a federal judge, added, "We are happy to know that Christa's goals have been largely accomplished in that she has inspired generations of classroom teachers and students, and has focused public attention on the critical importance of teachers to our nation's well-being."