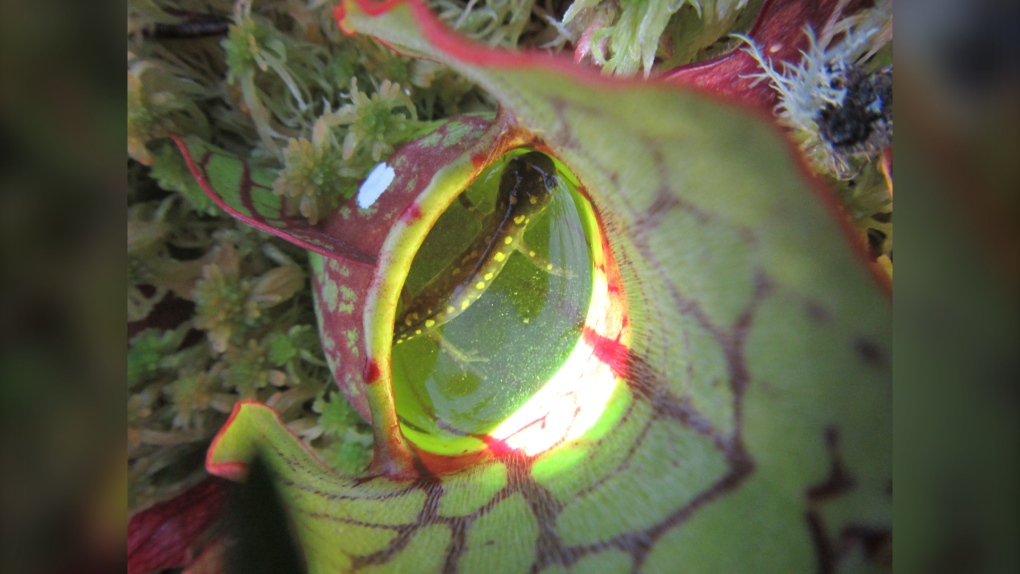 A juvenile spotted salamander is seen inside a pitcher plant in this undated photo (Patrick D. Moldowan)

Canadian researchers have discovered that carnivorous pitcher plants in Ontario’s Algonquin Provincial Park are feeding on baby salamanders in addition to their regular diet, believed to be a first in North America.

Their paper, published in the Ecology journal, details how testing showed that 20 per cent of pitcher plants surveyed in the park contained at least one salamander.

Carnivorous plants tend to populate nutrient-poor environments, and in southern Ontario that means bogs. The bell-shaped pitcher plant is a common sight in Algonquin, as are the yellow-spotted salamanders.

What surprised the researchers was how long it took for anyone to discover what was happening.

“The Wildlife Research Station near the bog has been there for 70 years,” said research paper co-author Alex Smith a biology professor at the University of Guelph, in an email to CTVNews.ca.

Smith, along with PhD candidate and co-lead author Patrick Moldowan of the University of Toronto, say that their discovery means that “plants eating vertebrates may be more common than [we] once thought.”

Most carnivorous plants are thought to eat invertebrates and arthropods, such insects and arachnids, although a species of pitcher plant in a remote part of the Philippines was found to catch rodents as large as rats.

Smith and Moldowan are also studying how the salamanders die and break down inside the plants.

“The salamanders may simply drown if they cannot climb out of the pitcher, [or] the pitcher itself may contain some digestive enzymes for a high acidity or temperature or some combination of these that kills and then breaks down the… juvenile salamander,” says Smith.

“There is also a whole community of other organisms living in the pitcher that may break down this larger animal in small chunks that the plant can then begin to absorb.”

Smith says it “seems to take less than two weeks” for the salamanders to decay.

The study “suggests there is still much more for us to learn from…the common things we share the planet with, let alone species we haven’t named yet,” says Smith.