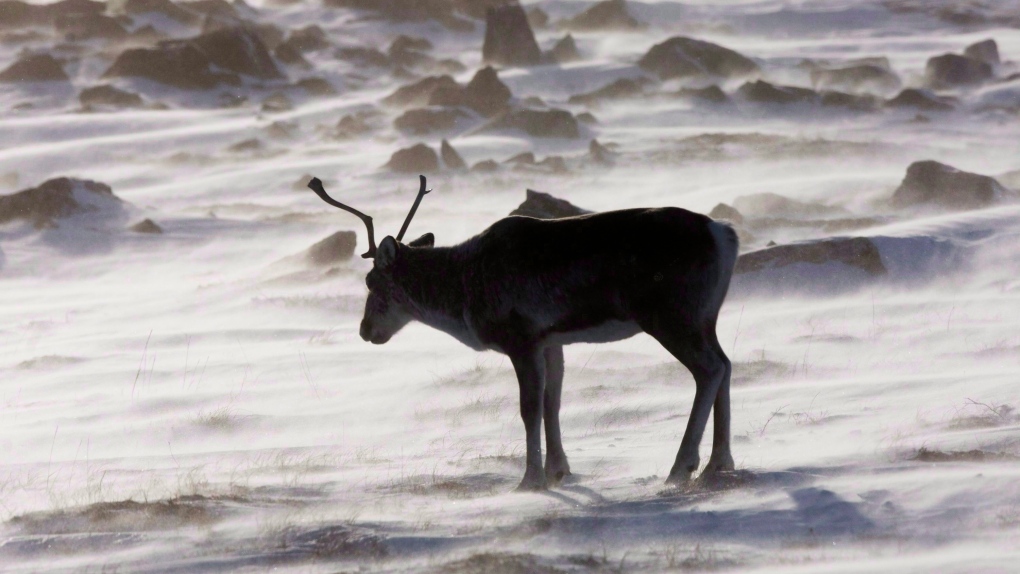 A wild caribou roams the tundra near The Meadowbank Gold Mine located in the Nunavut Territory of Canada on Wednesday, March 25, 2009. (THE CANADIAN PRESS/Nathan Denette)

YELLOWKNIFE -- Tradition and technology are clashing on the tundra where Indigenous groups are debating the use of drones to hunt caribou.

The issue arose during public consultations on new wildlife regulations in the Northwest Territories, where First Nations and Metis depend on caribou for food.

Drones are not widely used to hunt, but the N.W.T. government says they have been utilized to find caribou and sometimes to herd them to a hunter. That's caused fears of increased pressure on populations that are already struggling.

The Bathurst herd, nearly half a million strong in the 1980s, has dwindled to 8,500. The Bluenose-East herd has declined almost 50 per cent in the last three years to about 19,000 animals.

"We heard significant concern about the use of drones for hunting and broad support for a ban on their use," Joslyn Oosenbrug, an Environment Department spokeswoman, said in an email.

The territory has proposed banning drones for hunting except for Indigenous harvesters.

Some Indigenous groups argue the ban should go further. The board that co-manages wildlife between Great Slave and Great Bear lakes wants a ban on drones to apply universally.

"The Wek'eezh├¼i Renewable Resources Board would prefer that drones not be used for harvesting purposes," said board biologist Aimee Guile in an email.

The Northwest Territory Metis Nation also wants to see drones banned for everyone.

Others argue that banning drones for Aboriginals would violate treaty rights.

An N.W.T. report into consultations on the proposed ban says both the Inuvialuit Game Council and the Wildlife Management Advisory Council stated that rights holders should be exempt from the proposed ban, "because of the potential infringement to Aboriginal harvesters exercising their rights."

"It's a matter of leaving it with us," said spokesman Michael Birlea. "We want to be able to make our own decisions rather than somebody else."

Tli Cho residents are uneasy with the technology.

"(Tli Cho leaders) also acknowledged the discomfort heard from many of their citizens," the consultation report said. "Many citizens expressed that all harvesters should be prohibited from using drones."

Members of the Fort Chipewyan Metis local in Alberta hunt in the N.W.T. and are concerned about the impact drones could have on the health of caribou herds and on Metis culture.

"Drones could undermine the transmission of traditional knowledge to younger hunters about how to hunt and what to look for," the local said in its submission.

It suggested that restrictions on drones should come from Indigenous governments, not the territory.

Others have made similar points.

Summarizing what the government heard during consultations, Oosenbrug said: "Using drones is bad because it is another loss of the Indigenous culture of NWT people as it does not represent a traditional way of hunting.

"(It) shows a lack of respect for Indigenous culture and the wildlife, and it should be considered cheating."

The N.W.T.'s new wildlife regulations came into effect July 1, but the territory chose to defer a decision on drones until there are further talks.

More discussion is planned for the fall, said Oosenbrug.

"(The Wildlife Management Advisory Council) looks forward to continued discussions with the (territory) on the potential conservation issues for wildlife and implications to harvesters with Indigenous rights," said an email from the group.

Indigenous hunters have already accepted restrictions on the number of animals they can take. In some areas, no hunting is allowed at all.

-- By Bob Weber in Edmonton