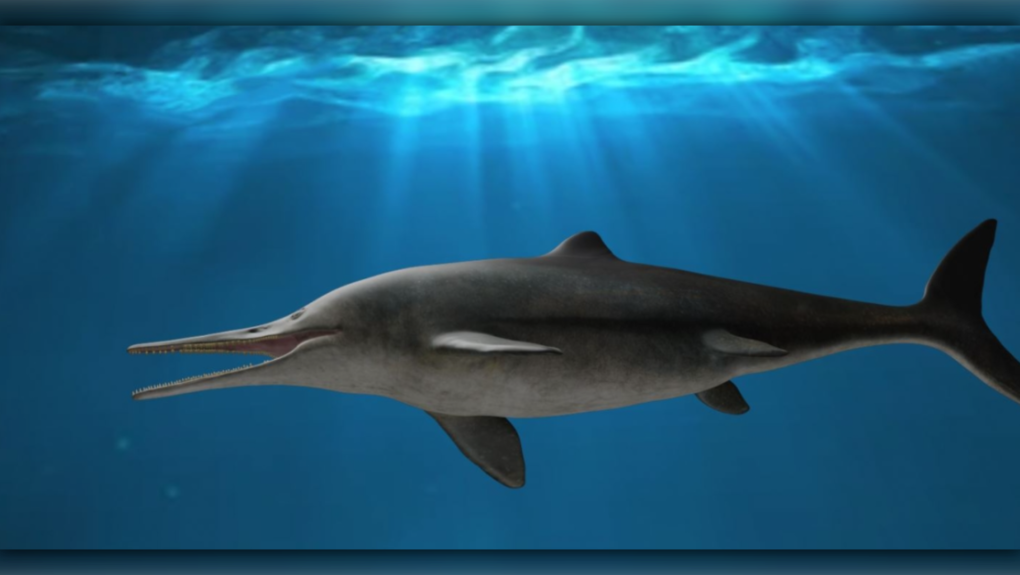 A digital rendering of what the Kyhytysuka sachicarum may have looked like based on fossilized remains. (McGill University/Dirley Cortés)

TORONTO -- A newly discovered extinct swordfish-shaped marine reptile estimated to be 130 million years old is helping to shed light on the evolution of ancient animals known as ichthyosaurs.

An international team of researchers from Canada, Colombia and Germany discovered the new species, with a well-preserved metre-long skull, and is hailing it as one of the last surviving ichthyosaurs, which were ancient animals that resemble modern-day swordfish, according to a news release from McGill University.

The team presented its findings in a study published this month in the Journal of Systematic Paleontology.

“This animal evolved a unique dentition that allowed it to eat large prey,” said McGill’s Redpath Museum Director Hans Larsson in the release. “Whereas other ichthyosaurs had small, equally sized teeth for feeding on small prey, this new species modified its tooth sizes and spacing to build an arsenal of teeth for dispatching large prey, like big fishes and other marine reptiles.”

Researchers decided to name the new species “Kyhytysuka” which translates to “one that cuts with something sharp” in the Indigenous language from the central Colombian region the fossil was found in.

Researchers chose the name in honour of the ancient Muisca culture that lived in Villa de Leyva area for millennia, according to the release.

According to the study, this discovery clarifies the evolutionary progress of ichthyosaurs and allows them to compare the new species with ones from the Jurassic and Cretaceous periods, with a chance to study how they evolved.

The Kyhytysuka hails from a transitional time during the Early Cretaceous period, when the Earth was coming out of a relatively cool phase with rising sea levels and the supercontinent Pangea was splitting into Northern and Southern land masses.

The end of the Jurassic period also experienced a global extinction event that changed marine and terrestrial ecosystems, the release states, with many species being succeeded by new lineages evolved from their predecessors.

“We are discovering many new species in the rocks this new ichthyosaur comes from. We are testing the idea that this region and time in Colombia was an ancient biodiversity hotspot and are using the fossils to better understand the evolution of marine ecosystems during this transitional time,” said researcher Dirley Cortes in the release.

The researchers plan to continue exploring the new fossils found in Villa de Leyva in Colombia.

“This is where I grew up,” said Cortes, “and it is so rewarding to get to do research here too.”