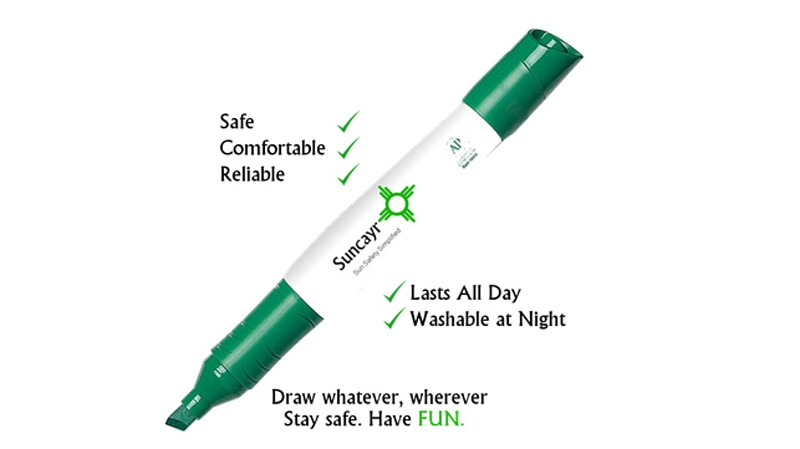 The sunscreen warning marker, Suncayr, was developed by students at the University of Waterloo. (Suncayr)

A team of Canadian university students is among three runners-up in an international competition for young inventors, thanks to the group’s innovative marker that tells users when their sunscreen is no longer working.

Undergraduate students from the University of Waterloo in Ontario were the first-ever Canadian team to be short-listed for the James Dyson Award, which receives hundreds of entries from 18 countries.

The team’s invention, Suncayr, is a UV-sensitive marker that changes colour when the skin is no longer blocking harmful rays.

Users can draw any kind of pattern on their skin with the marker and then apply sunscreen. When the sunscreen breaks down or wears away, the marker changes colour so the user knows when to reapply.

Suncayr was selected runner-up from a list of 20 international finalists.

The team, five undergraduate nanotechnology engineering students, will receive the runner-up prize of 5,000 pounds ($9,000 CAD) to put toward product testing and development.

“The consequences of not having adequate sun protection are significant,” the award’s founder, James Dyson, said in a statement.

“Suncayr uses visual cues, so it’s obvious when it’s time to reapply sunscreen. As with all the best problem-solving designs, it’s very simple to use -- but very effective.”

The team got the idea for the product when so many of them kept getting sunburned despite using sunscreen.

“We were fed up with being sunburned on days we thought we were being vigilant about re-applying sunscreen,” team member and Suncayr CEO Rachel Pautler said.

The team hinted that with Suncayr’s initial prototype complete, expect “big news” in 2015. Research and development work is ongoing at lab space at Velocity Science on the University of Waterloo campus.

The James Dyson Foundation awards are open to students of product design, industrial design or engineering, or recent graduates. A panel of experts selected the 20 finalists last month.

The winner of the Dyson competition is MOM, an inflatable incubator created by U.K. inventor James Roberts.

After watching a television report about the crisis of refugees fleeing Syria, Roberts wanted to invent an inexpensive, electronically controlled, inflatable incubator that can easily be used in third-world settings.

The MOM can function in much the same way as a regular incubator in that it offers a stable heat environment, humidification and a jaundice light. It can easily be collapsed and transported around the world.

While a regular incubator can cost tens of thousands of dollars, the MOM can be manufactured and delivered to a site for about $500.