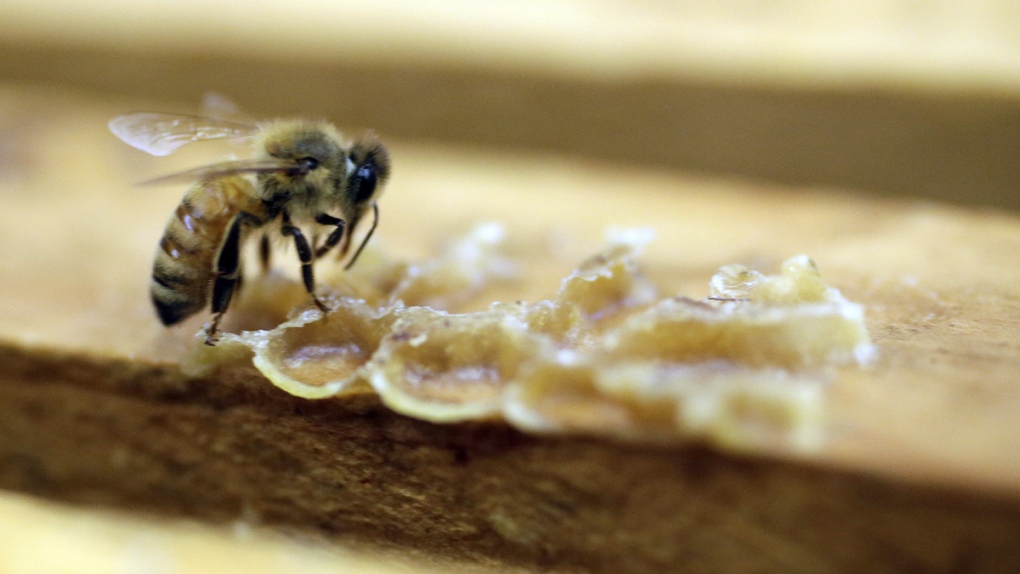 When Dave Passafiume bumped into some men at a conference looking for farmers to enlist bees in a test to distribute pest and disease control on crops, he considered the severe losses he sometimes saw on his strawberry fields and decided to give it a try.

"I wasn't sure what to expect," said the farmer, who operates an organic strawberry and apple operation in Markham, Ont. -- about 50 kilometres northeast of Toronto -- with his wife.

He's now been employing the bees for about eight seasons and says he loses much less of his crop to mould.

Bee Vectoring Technologies International Inc. (BVT) has created a way for bees to deliver a bacterial fungicide to blueberry, sunflower and other crops to help protect them from disease in a method it says is cheaper and more environmentally friendly.

The U.S. Environmental Protection Agency, long considered the gold-standard for approvals, recently certified BVT's proprietary ingredient and the company now plans to start selling the system to American farmers and expedite its push for approvals in other countries, including Canada.

"The target has always been the U.S. first," said CEO Ashish Malik. "The reason being is it's the single, biggest market for this technology."

In late August, the EPA approved the Mississauga, Ont.-based company's Vectorite, the brand name for its proprietary bacterial fungicide, for use on commercial crops.

The company sets up bumble bee or honey bee hives on farms and installs special trays filled with Vectorite inside that the bees must walk through, picking up the powder on their feet, before flying away to pollinate nearby crops. The process works for fields of strawberries, sunflowers, apples, tomatoes, canola and blueberries. The system requires less chemicals, machinery and water than traditional distribution methods, the company says.

BVT had to prove that its method and the Vectorite wouldn't harm the bees as part of the approval process.

Bee health and safety has been a major issue over the past decade with the identification of Colony Collapse Disorder among honey bees. CCD occurs when the majority of a hive's worker bees disappear, leaving behind the queen and a few other bees, according to the EPA. The hive dies as it can't sustain life without the worker bees.

The food system depends on bees, which pollinate much of the world's food supply. One out of every three bites of food people eat is made possible by pollinators like honey bees, according to Bees Matter, a partnership of agricultural organizations that say they have a vested interest in pollinator health.

BVT suggests using bumble bees over honey bees -- though it can set up either type of hive -- as bumble bees can carry more Vectorite and fly in a wider variety of climates.

The company conducted a number of studies on the technology's effect on adult bees and larva as part of the approval process, said Malik, adding it's confident the process doesn't have any adverse impact on the insects. It also asked the commercial beekeepers it works with to track their colonies.

"The reality is, since we work with commercial beekeepers, if we had an adverse effect, we would automatically be out of business."

Several academics who study bees wouldn't comment on whether the process harms bees, citing a lack of information.

Marla Spivak, a former MacArthur fellow and an entomology professor at the University of Minnesota, declined an interview, but sent a note saying, "I think we need more research on the risks that fungicides pose to bee health before using them as vectors."

Since the EPA approval, the company has big plans for rapid growth.

The company has been testing the system in the U.S., Canada, and some other countries, said Malik, but can now start selling the system to U.S. farmers.

With EPA approval in hand, the company expects increased ease of access to other markets and is working to secure approvals in the European Union, Mexico, and Canada -- among other countries.

The pricing will be similar to conventional methods, he said, but will result in higher yields with less crop destroyed.

"It's not about saving (farmers) money. It's about giving them more revenue per acre."

"It's just a radical difference," he said.

BVT plans to increase the number of diseases and pests it can help ward off. It envisions a future where the bees deliver two or three biological, safe plant protection products in one flight, Malik said.

"By that process, the plant now can fight several different diseases and pests as opposed to the ones that our product by itself addresses."

This report by The Canadian Press was first published Oct. 13, 2019