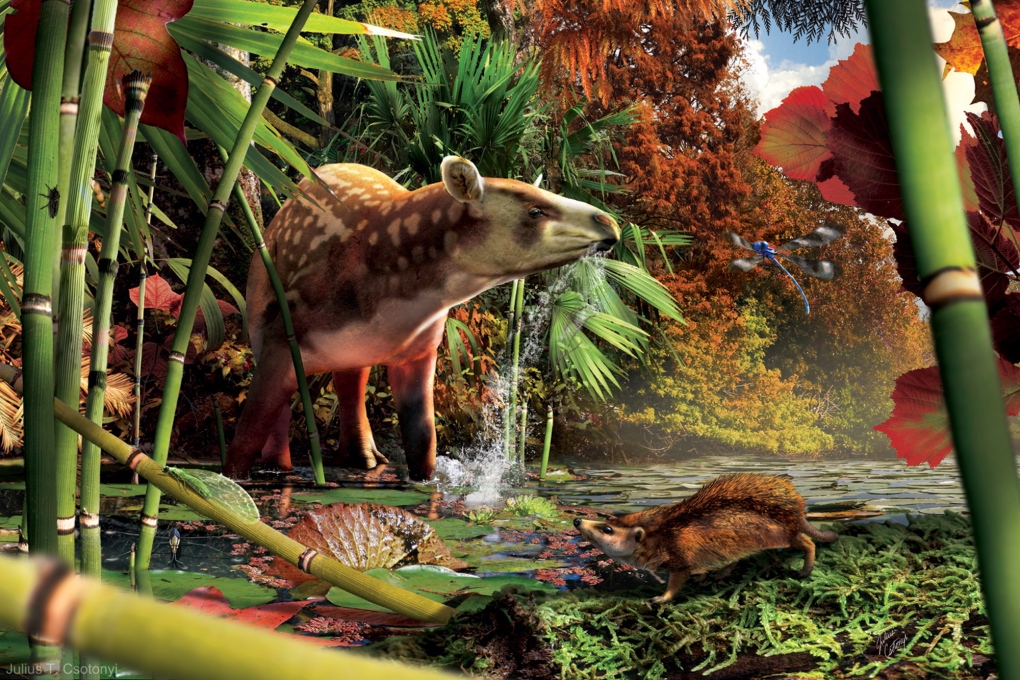 The tapiroid Heptodon drinks in the shallows, while the small proto-hedgehog Silvacola acares stalks its prey in the foreground in this photo illustration. (Handout / Illustration by Julius T. Csotonyi)

His portraits are so compelling you can almost hear his subjects tramp through the forest and smell their heaving breath.

Yet Julius Csotonyi has never seen any of the animals he depicts. Dinosaurs, after all, have been gone a long time.

"It's really fun," said Csotonyi, whose dramatic illustrations of extinct beasts enliven the densest of paleontological papers. "It's the unknown and trying to figure out new things. That's always interested me."

Csotonyi's work appears regularly in top scientific journals. The Vancouver-based illustrator has brought life to everything from a bus-sized shark to a primitive snake with legs.

Like a lot of kids, Csotonyi grew up drawing dinos.

But he never stopped. Even when he was working on his doctorate in microbiology, he drew dinosaurs on the side for publications such as Prehistoric Times.

Then, in 2005, an English publisher preparing a dinosaur encyclopedia called him up. That's when Csotonyi realized he could make a living at it.

Picturing an animal known only by a few bones, Csotonyi said, is a delicate dance between art and science.

"You come up with an image that's plausible, but interesting as well."

A commissioning scientist will send him photos of fossils and share whatever data might help. Csotonyi comes up with a sketch and a careful back-and-forth ensues to get the dino right and have it doing something believable in the correct context.

Hints come from all sorts of sources. Environment might suggest colour; scraps of fossilized skin or feathers point to texture; a related species - even one still living - might offer clues.

"Sometimes ... animals that are closely related to it have certain features that are conserved in a group. We use those to insert what missing parts of the animal may have been like."

This August, Csotonyi drew on a modern iguana species for an image of an extinct, 60-million-year-old lizard.

Subjects are posed to emphasize whatever the paper is focusing on.

"The more of a story the image tells, the better it is."

What's not shown sometimes says as much as what is.

"If there are parts that are not known, you can hide parts of the animal's anatomy."

And imagination is always an asset.

"I love to try to imagine what it would be like standing in a particular time and make a visual image, where you hold in your head the kinds of trees and plants that would be around, what it sounds like, try to get a visceral feel for what it might be like to stand there."

Occasionally, Csotonyi revises images once new research comes along. Once, he surmised that a feathered dinosaur from China was red.

"The next paper that came out on it allowed the researchers to build up a map of the colour patterns - striped wings, a russet crest on its head, dark greys on various parts," he said. "That's what's kind of fun about science."

Working with an artist such as Csotonyi can help scientists refine their ideas. Theories formed by measuring bones don't always make sense when translated into an image, said Currie.

"If you reconstruct an animal a certain way and it turned out it had legs that were just impossibly ridiculous, you may not know that from looking at the measurements themselves. By having the discussions, you're able to see things better yourself."

Csotonyi holds an advanced degree in the sciences, but has never formally studied painting.

So, scientific artist or artistic scientist?

"It's just really fun to be able to reproduce something like this and to try to create an image that's not just plausible and accurate, but also makes for an esthetically pleasing image."