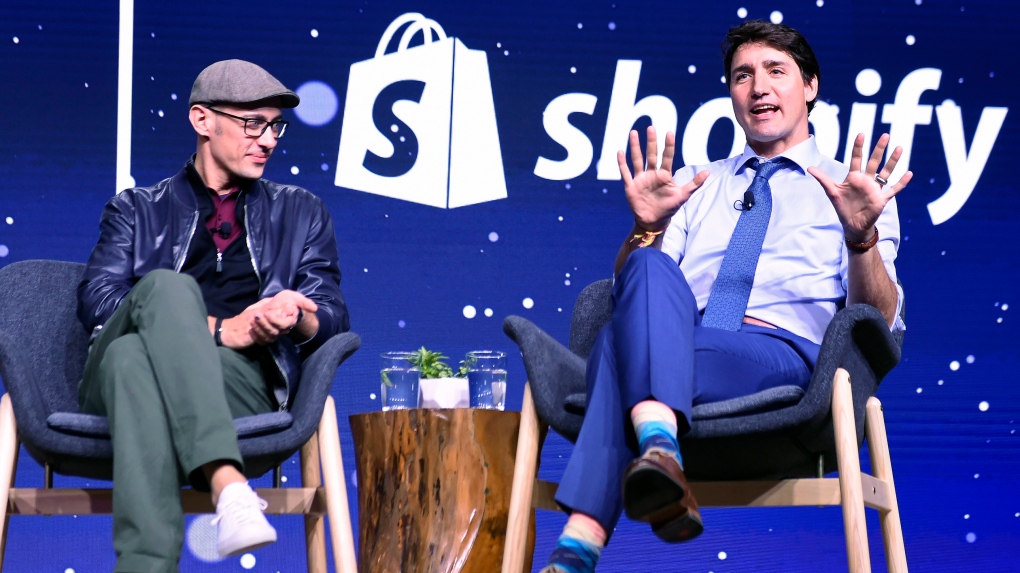 Prime Minister Justin Trudeau participates in an armchair discussion with Shopify CEO Tobias Lutke in Toronto on Tuesday, May 8, 2018. THE CANADIAN PRESS/Nathan Denette

Speaking at e-commerce giant Shopify Inc.'s annual conference in Toronto on Tuesday, he praised Canada's entrepreneurs, but lamented how susceptible their innovations are to overseas investors.

"As soon as we come up with a really great idea, someone with really deep pockets comes up from the States or somewhere else in the world and says, 'Oh great, I am going to incorporate that into my platform,"' he said.

"We just need to have a little more swagger as a country, a little more of an ability to promote and demonstrate how awesome we are. We don't often do that. We don't do that enough."

Trudeau said he has seen a lot of funding flowing to Canada from Silicon Valley, where major American technology companies have built their businesses, but "we need to do a better job of generating that capital here."

He said there's also a flurry of Canadians returning home from the U.S., but did not elaborate further. His statement is at odds with recent worries from experts of a so-called brain drain caused by computer engineering workers in Canada moving south of the border for jobs.

Talk of the brain drain and promoting businesses as Canadian hit home for Shopify CEO Tobias Lutke, a German immigrant who built his company in Ottawa and shared the stage with Trudeau.

A few days prior, in response to a graphic comparing Toronto and other cities' cost of living to San Francisco, Lutke tweeted, "I'm hiring," and that "Canadians should strongly consider helping the economy of the country they're from, instead of contributing their talent to the American balance sheet."

On stage on Wednesday, he said for years Silicon Valley workers have emailed him asking for meetings and not realizing Shopify wasn't located in the Valley, but in Ottawa, where it is "fiercely Canadian."

But he admitted the company does benefit from Canadians who have moved around the world for work and returned, bringing with them valuable perspectives on other markets that Canadian companies want to crack into.

That multiculturalism gives companies better decision-making abilities and is of massive value, he said.

"That is something Shopify somehow figured out early or simply inherited as a derivative from Canadian primary culture that has lead to a lot of success we have," he said.

Dynamic chat this afternoon with @tobi of @Shopify and @ambermac at #ShopifyUnite in Toronto, focused on supporting Canadian talent & innovation to create more jobs & opportunities for small businesses & entrepreneurs. You can watch it here: https://t.co/lP2TwwgijT pic.twitter.com/S8hCXBxYIS