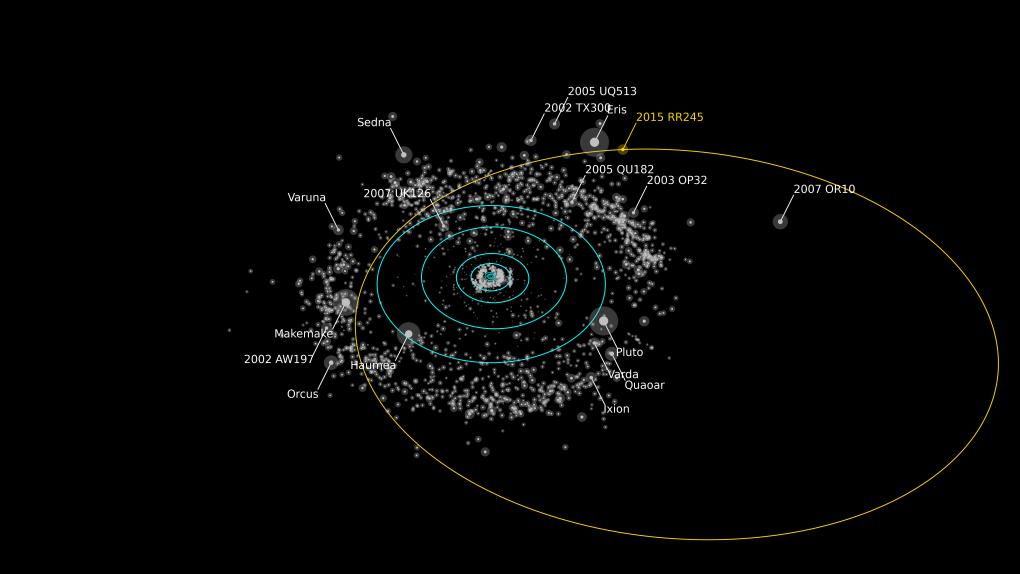 A new dwarf planet with a really big orbit has been discovered traveling more than 12 billion kilometres from the sun.

The new planet has been found amongst the icy worlds beyond Neptune by a team of international astronomers which includes Canadians. The object, called 2015 RR245 for now, is roughly 700 kilometres in size and takes 700 years to orbit the Sun, one of the largest orbits for a dwarf planet.

RR245 was spotted by National Research Council of Canada’s JJ Kavelaars this past February in Outer Solar System Origins Survey (OSSOS) images from September 2015. The object was sighted using the Canada-France-Hawaii Telescope located in Maunakea, Hawaii.

Michele Bannister of the University of Victoria is a postdoctoral fellow with the survey and says it’s exciting to find a dwarf planet large and bright enough to study in detail.

“The icy worlds beyond Neptune trace how the giant planets formed and then moved out from the Sun,” Bannister said in a news release. “They let us piece together the history of our Solar System.”

Most dwarf planets like RR245 were either destroyed or hurled from the solar system when the giant planets, such as Mars, Jupiter and Neptune, moved out to their current positions. RR245 joins Pluto and Eris, the largest known dwarf planets, as one of the few surviving to this day.

The newcomer has an orbit which takes it more than 120 times further from the sun than Earth. Thanks to the recent flyby of Pluto by the New Horizons spacecraft, astronomers know that far-flung dwarf planets like RR245 have unique geologies with landscapes made up of many different frozen materials. Bannister said the new dwarf planet’s surface properties still need further measurement to know exactly what it looks like.

“It’s either small and shiny, or large and dull,” she said.

The new dwarf planet is traveling towards its closest approach to the sun at about 5 billion kilometres which it’s expected to reach in 2096. In the meantime, astronomers will continue to study where it came from and how its precise orbit may evolve in the coming years.

The survey group that discovered the new planet is comprised of 50 scientists from universities and institutes around the world. One of those scientists, Prof. Brett Gladman from the University of British Columbia, says the OSSOS was designed to map the orbital structure of the outer solar system to discover its history. Finding the RR245 dwarf planet was an added bonus.

“While not designed to efficiently detect dwarf planets, we’re delighted to have found one on such an interesting orbit,” Gladman said in a news release.

The RR245 is the largest discovery and the only dwarf planet found by OSSOS. The survey has found more than 500 new trans-Neptunian objects. Gladman said the observing capabilities of the Canada-France-Hawaii Telescope made the planet’s sighting possible.

“The Canada-France-Hawaii Telescope is located at one of the best optical observing locations on Earth, is equipped with an enormous wide-field imager and can quickly adapt its observing each night to new discoveries we make,” Gladman said.