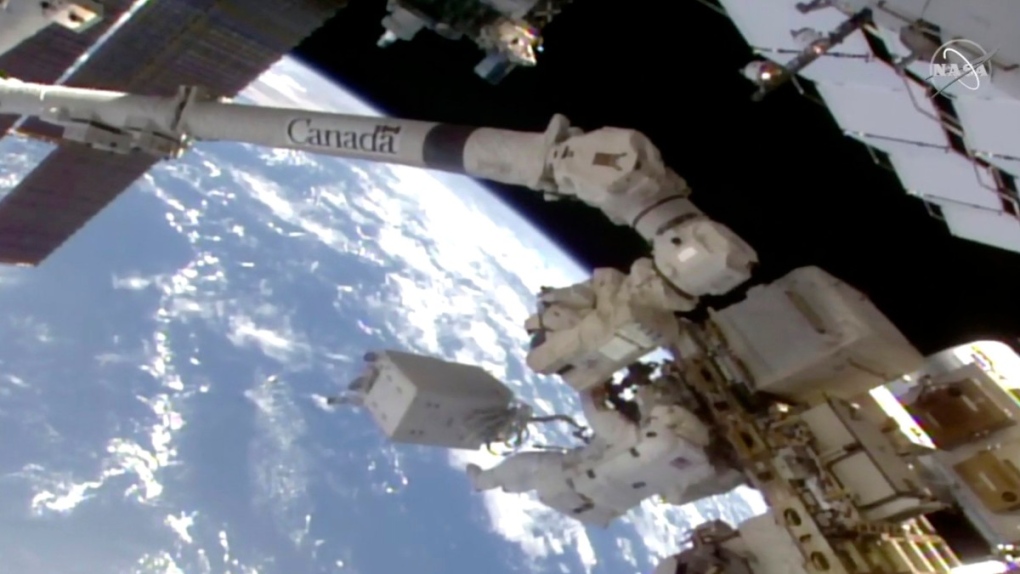 In this image from video, NASA astronaut Victor Glover makes his way to the International Space Station’s European lab on Jan. 27, 2021. (NASA via AP)

Only one of the two lab upgrades was completely successful.

NASA's Mike Hopkins and Victor Glover installed a new antenna on Columbus, one of three high-tech labs at the orbiting outpost. It took a few tries by scientists in Europe to get it turned on properly. No longer needed, the boxy antenna cover was thrown overboard.

"Here we go. Countdown: 3-2-1," Glover radioed as he heaved it safely away from the space station.

Elsewhere on the lab, Glover could not hook up all the power and data cables on a science research platform that's been awaiting activation for almost a year. He managed to hook up four of six cables. They checked out well with power flowing, enabling partial use of the platform.

But connectors on two cables would not close all the way, and those had to be capped. Engineers will try to come up with a work-around for a future spacewalk, so the entire platform can house experiments.

SpaceX delivered the platform named Bartolomeo to the space station last spring. The shelf was installed with the station's robot arm, but had to wait until Wednesday's spacewalk to get hooked up.

Airbus, which built and runs Bartolomeo, is looking to sell space on the platform for private research projects. It's Europe's first commercial venture outside the station.

Danish astronaut Andreas Morgensen guided the spacewalkers from Mission Control in Houston, where controllers wore masks and were seated apart because of the pandemic. The spacewalk lasted seven hours.

Hopkins and Glover will perform a second spacewalk on Monday to complete battery upgrades to the station's solar power grid. The latest spacewalk was the third for Hopkins and first for Glover.

They are part of SpaceX's second astronaut flight that launched in November. Their docked Dragon capsule was visible on NASA TV during the spacewalk.