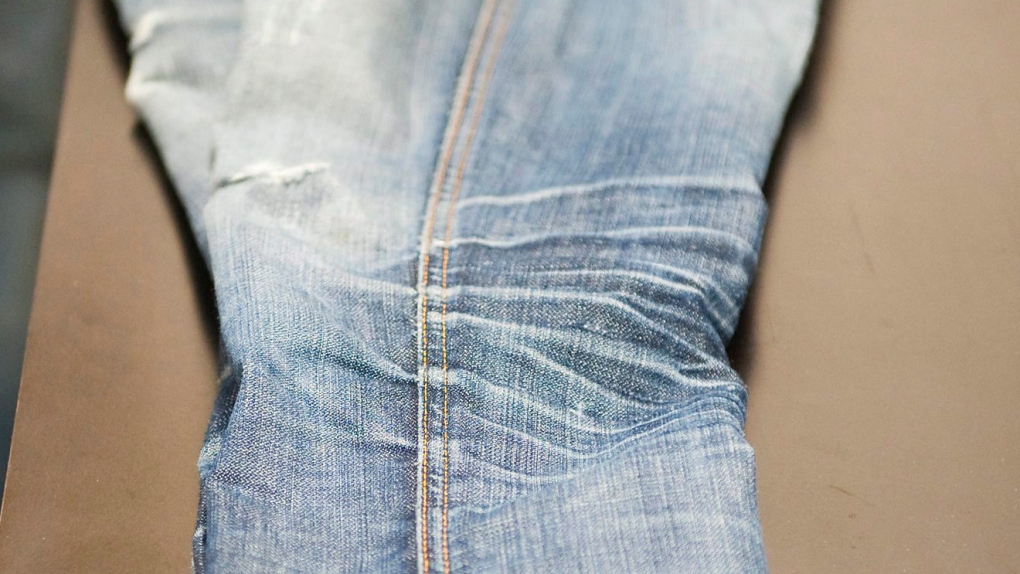 A pair of jeans are seen at the University of Alberta on Wednesday, January 19, 2010, in Edmonton. A new study suggests that washing your jeans could be contributing to the pollution of Canada's waters. THE CANADIAN PRESS/John Ulan

TORONTO -- They may hug you in all the right places, but your favourite pair of jeans could be contributing to the pollution of Canada's waters, a new study suggests.

Researchers at the University of Toronto published a paper on Wednesday  revealing that they've detected microfibres from blue jeans in aquatic environments ranging from the shallow suburban lakes near Toronto, across the Great Lakes and all the way up to the Arctic Archipelago.

But Athey said the team's findings indicate that so-called "natural" fabrics may represent a new frontier of the microfibre pollution problem.

She said further investigation is needed to understand the impacts of human-processed cotton microfibres on marine wildlife.

But earth sciences professor Miriam Diamond said there may not be time to let the scientific process unfold, because the presence of these particles in waters so far away from most of the jeans-wearing population should be cause for global concern.

"Frankly, we can't keep waiting to figure out what the impacts are," Diamond said. "What we do know is that we shouldn't be polluting the Arctic like this."

Athey said the investigation started when she and her fellow doctoral students realized that indigo-dyed cotton fibres kept coming up in samples across their respective areas of environmental research.

Diamond suspected that the source may be a worldwide wardrobe staple: blue jeans.

The researchers set out to study the distribution of denim and other human-processed cotton microfibres across Canada's water systems.

Denim microfibres were found at depths greater than 1,500 metres, indicating that the particles may be able to travel long distances and accumulate in remote regions, according to the study.

Athey said denim microfibres were also detected in effluent from wastewater treatment plants that discharge into Lake Ontario, suggesting their route may be traced back to the washing machine.

Researchers conducted a series of tests that found that a pair of used jeans can shed roughly 56,000 microfibres per wash.

Athey said some studies suggest that washing machine filters can help trap microfibres and prevent them from entering aquatic environments.

Diamond said denim lovers can reduce their fashion footprint -- and preserve their pants -- by following clothing manufacturers' recommendations to try to get as much wear out of their jeans as possible before washing.

This report by The Canadian Press was first published Sept. 2, 2020