BlackBerry shares continued to slide on Thursday, one day after the company formerly known as Research in Motion debuted its long-awaited BlackBerry 10 operating system and two new smartphones.

In the months leading up to the big reveal of the BlackBerry Z10 and Q10, shares climbed steadily and eventually hit a high of $18.49 last week. In September, shares had been trading at just $6.10.

Some analysts blamed the weakening share price on the fact that while the touchscreen Z10 model will be available in Canada on Feb. 5, it won't hit U.S. store shelves until March.

BNN's Michael Kane said the drop in stock price isn't a sign that the new operating system and phones are not being warmly received. Rather, it's because investors purchased shares in the lead-up to the announcement, then sold them the moment the announcement was made – a strategy known as profit-taking.

"Speculators frequently do invest in a stock ahead of a planned announcement and routinely sell the moment the announcement is made in an effort to lock in that profit, and that's what happened yesterday," Kane said.

"We maintain our Buy rating on the stock and would use the recent 'sell-the-news' pullback to add to positions," said the note. "We continue to see significant upside to estimates over the next three quarters."

The Z10 will be available in Canada on Feb. 5, with the Q10, which has a physical keyboard, to follow shortly after. It's expected that the Z10 model with be priced at $149.99 on a three-year contract.

The new phones, which were originally set to be released last year, are seen by some analysts as a make-or-break product for the Waterloo, Ont.-based tech company.

RIM arguably invented the smartphone, but Android and iPhone have moved into the lead in recent years, setting the standard for touchscreen technology and smooth Internet browsing -- areas where BlackBerry devices have struggled in the past.

Although CEO Thorsten Heins announced his Waterloo-based company was dropping the Research in Motion moniker in favour of 'BlackBerry', the stock continues to trade under the symbol RIM on the TSX, and RIMM on the Nasdaq until Monday, when it will become BB on the TSX and BBRY on the Nasdaq. 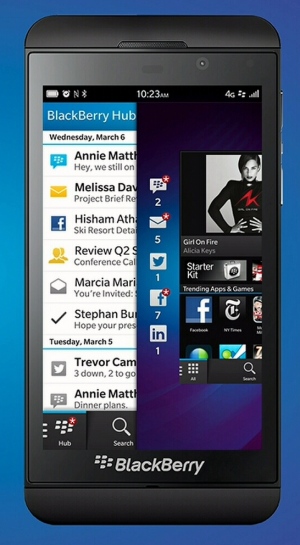 From Hub and Peek to Kindle, Skype, and Angry Birds check out the new features