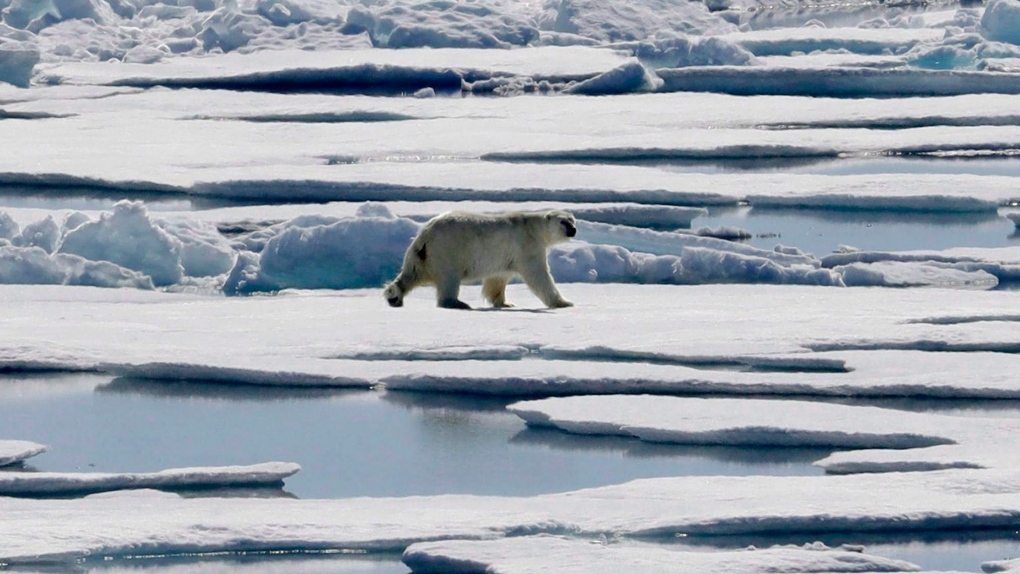 In this July 21, 2017 photo, a polar bear walks over sea ice floating in the Victoria Strait in the Canadian Arctic Archipelago. (David Goldman/AP/THE CANADIAN PRESS)

An analysis of dozens of blogs that question the threat climate change poses to polar bears has found the writers ignore virtually all the science on bears and sea ice.

The study, published Wednesday in the journal BioScience, suggests the blogs use the two topics to create doubt about climate change generally. And it found that a Canadian scientist is a main source of their arguments.

"If they can push over the polar bear domino, all other examples of climate change are dismissed by association," said lead author Jeff Harvey of the Netherlands Institute of Ecology.

"If polar bears are thriving --and there's no negative effects of climate change on them -- you can't believe any of these other studies, so ignore all of it."

Harvey's study was co-authored by an A-list of international climatologists and biologists who have between them published hundreds of peer-reviewed papers on climate change and its impact on environments, especially polar bears.

Researchers looked at 90 blogs that regularly discuss climate change. Half supported the consensus view that changes are happening and are the result of human activity. The other half didn't.

"None of the blogs or online sources expressed views with respect to (climate change) that were truly in the middle," the study says. "They fell quite easily into two camps."

The denier blogs include popular destinations such as Climate Depot, Watts Up With That and Junk Science.

Researchers compared the arguments used by both groups to 92 peer-reviewed, published papers that discuss polar bears and sea ice -- virtually everything that's been written in the last few years, said Harvey.

"As far as we know, this is it. There are no other papers that combined both."

Almost none of the denier blogs agreed with the main conclusions in the 92 published papers and routinely contradicted them.

"The climate-science-based blogs were acknowledging that there's uncertainty, but acknowledging the mounting evidence ... in changing Arctic sea ice status and the polar bears," said co-author Meena Balgopal of the University of Colorado.

"The climate-science-denying blogs were really highlighting the negative aspects of uncertainty. They were also using rhetorical devices that were also about name-calling, implying that environmental scientists were not trustworthy."

The denier blogs also reinforced each other through mutual links. The same names surfaced again and again, said Harvey.

"There's a bit of an echo chamber."

About 80 per cent of denier blogs cited the work of University of Victoria zoologist Susan Crockford, even though she has published almost no peer-reviewed research on polar bears and hasn't done any field studies.

Crockford, who writes the Polar Bear Science blog, has been associated with think-tank the Heartland Institute, which denies climate change, and spoke at one of its conferences as recently as last spring.

She also appears in North American and European mainstream media, including Canadian newspapers such as the Financial Post.

"Tell your readers to have a look at my blog and see for themselves," Crockford said in an email. "They will also see what my credentials actually are, as opposed to how they are portrayed by the authors of this paper."

Crockford says polar bear numbers remain strong and suggests the bears will be able to adapt to changes in sea ice.

Most scientists say that while some populations are doing fine, others -- especially southern ones -- are increasingly unhealthy. They say all populations risk sudden collapse once sea ice shrinks too much.

Harvey said he hopes the paper will encourage the public to think more critically.

"I want them to question the veracity of what they read online."

The paper is also a call to arms for scientists to defend their work.

"We feel that many scientists mistakenly believe that debates with deniers over the causes and consequences of climate change are purely science-driven," it says.

"In reality, the situation with deniers is probably more akin to a street fight based on those deniers' political or economic agendas."