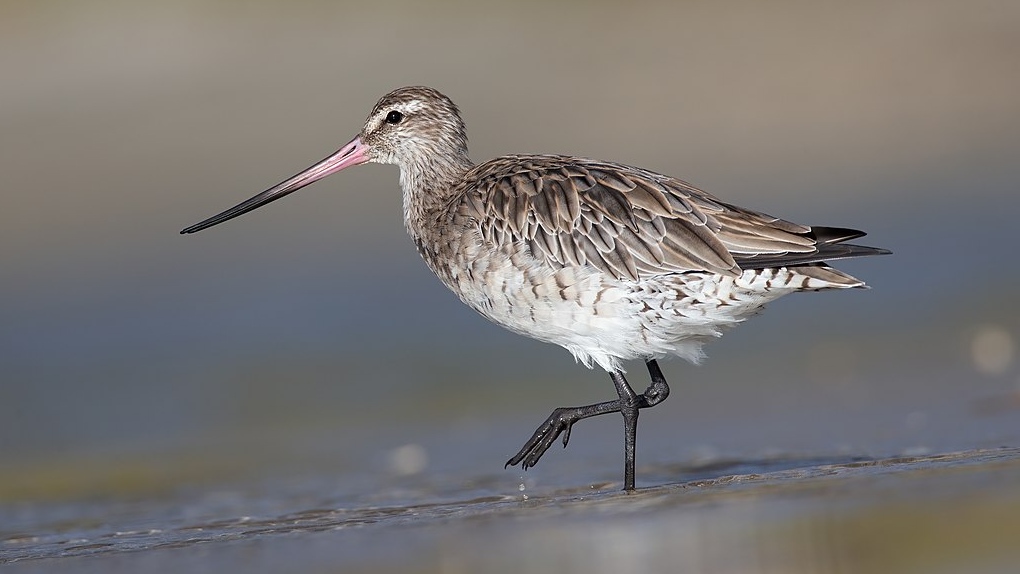 TORONTO -- A shorebird has reportedly broken the record for non-stop avian flight after flying more than 12,000 kilometres from Alaska to New Zealand in one go.

This journey across the Pacific Ocean is one that bar-tailed godwits are used to, but never has one flown quite this many kilometres, according to a report in the Guardian.

Bar-tailed godwits are shorebirds with long, pointed beaks, and they spend their summers in the northern hemisphere. Depending on the subspecies, they have different migration patterns, but the ones who summer in Alaska always head to New Zealand or Australia for the fall and winter.

The ecological corridor these birds traverse every year is called the East Asian - Australasian Flyway. The birds have several advantages that help them make this long migration.

“They have an incredibly efficient fuel-to-energy rate,” Jesse Conklin, with Global Flyway Network, told the Guardian. “They have a lot of things going for them. They are designed like a jet fighter. Long, pointed wings and a really sleek design which gives them a lot of aerodynamic potential.”

Our record-breaker left Alaska on September 18, Conklin told CTVNews.ca. Dubbed 4BBRW after the coloured tags placed on his leg for identification (blue, blue, red, and white), this bird was one of a group of several bar-tailed godwits that were being tracked by the Global Flyway Network (GFN), an organization of researchers worldwide who are interested in the globe-crossing migrations of birds.

Although 4BBRW followed roughly the same path south as the other birds, he veered slightly more towards the west coast of the United States at one point early in his journey, which may account for why he racked up more kilometres than some of the other birds.

On the GFN’s website, it’s possible to track birds with tags in real-time, or go back and see the journeys of certain birds at certain times. According to Conklin, this specific tracking project was funded by the T-Gear Foundation through Birds Canada, "so Canada can take some ownership of these results!"

Zooming in on 4BBRW between September 18 and September 27, we can see his journey zigzagging across the Pacific Ocean from Alaska to New Zealand. According to the website, he covered around 12,900 km in this time, but scientists believe rounding errors mean it is likely closer to 12,200 km, the Guardian reports.

On September 26, the GFN tweeted that 4BBRW was “approaching New Zealand fast.”

“He is riding winds that look as if designed for this flight path,” they said, adding that his groundspeed was up to 80-90 km per hour with a 40 to 45 km tailwind.

The bar-tailed #godwit with the 'bright red' icon 4BBRW is also approaching New Zealand fast. He is riding winds that look as if designed for this flight path. 40-45 km tailwind, groundspeed of 80-90 km/h! Showing up soon on New Zealand shores. #NZgodwits https://t.co/XyIXUEwqzO https://t.co/Wjh8r4gvQu pic.twitter.com/54dZQjeLhU

The last known record for non-stop avian flight was set in 2007 by a female bar-tailed godwit, called E7, who flew more than 11,500 km from Alaska to New Zealand without stopping, according to the National Geographic. She made the journey in nine days and helped show researchers that this was a common migratory path, as it was unknown before then that these shorebirds could cross so much of the Pacific Ocean in one go.

A release from the Centre on the return of the birds highlighted that 4BBRW was not the only impressive flyer. The release emphasized the incredible navigational compasses of these birds, pointing out that one bird, 4BWWY, was flying more towards Australia before she made a turn that had her flying almost directly for Cape Reinga, the tip of a narrow peninsula at the top of New Zealand -- all before 4BWWY could even see any land to guide her.

When she did spot land, she flew back out to sea and flew down the coast until she could cross Auckland to reach Pukorokoro Miranda.

Correction: An earlier version of this story stated that the bird left Alaska on September 16.