Betelgeuse, the unusually dimming star, is smaller and closer than scientists thought 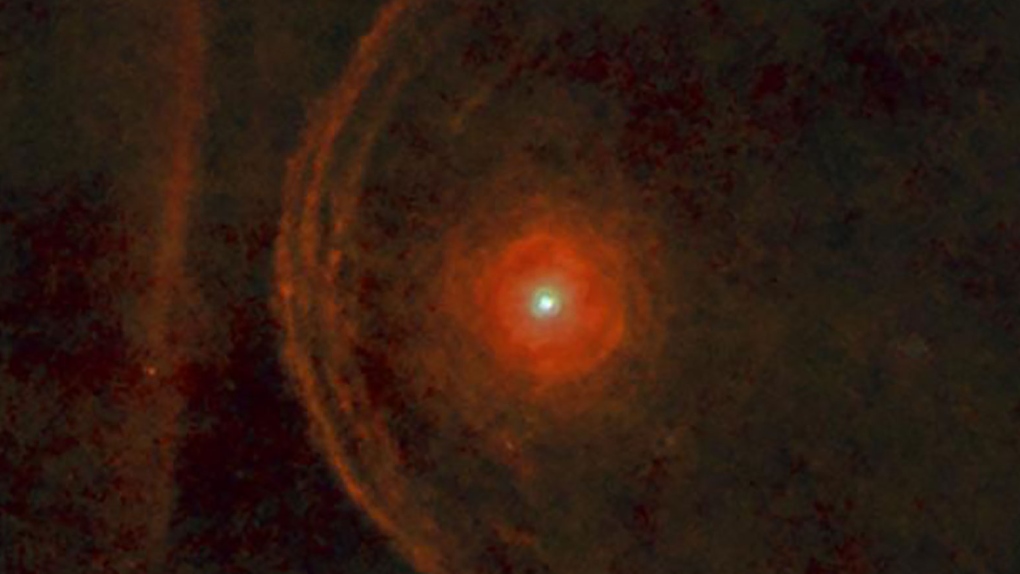 The red supergiant star Betelgeuse is seen here in a view from the Herschel Space Observatory. (ESA/Herschel/PACS/L. Decin et al.)

The red giant star Betelgeuse, which was thought to be on the brink of a supernova explosion, is still revealing more secrets, even after the Hubble Space Telescope helped solve the mystery of why it has looked a little dimmer than usual.

The star, which is visible in the Orion constellation, is actually smaller and closer than previously believed, researchers discovered.

The new study published Friday in The Astrophysical Journal.

Although the star has been well studied, Betelgeuse is regularly one of the brightest stars in our sky, which makes it harder to observe and study using telescopes, and more difficult to pin down its size and distance.

Previous studies suggested the star was bigger than the orbit of Jupiter, but the new study results have shown that Betelgeuse is only about two-thirds that size. This gives the red giant a radius 750 times that of our sun.

The size allowed the researchers to determine its distance from Earth at 530 light-years away, which is 25% closer than scientists previously thought, said László Molnár, study coauthor and research fellow at the Konkoly Observatory in Budapest, Hungary.

However, the researchers estimated this is still plenty of distance between the star and Earth to protect our planet from sustaining significant impacts when the star eventually explodes.

So when will Betelgeuse experience a supernova? It may not happen for another 100,000 years, according to the researchers.

The bright star since late 2019 experienced two significant drops in brightness, which caused some astronomers to believe that the red giant star was nearing the end and could explode.

These dimming events occurred due to dust clouds and pulsations of the star, according to the researchers. They were able to model the star's pulsing and found they were essentially pressure waves, or sound waves, that caused the pulsations.

"It's burning helium in its core at the moment, which means it's nowhere near exploding," said Meridith Joyce, lead study author and postdoctoral fellow at The Australian National University, in a statement.

"We could be looking at around 100,000 years before an explosion happens. It's still a really big deal when a supernova goes off. And this is our closest candidate. It gives us a rare opportunity to study what happens to stars like this before they explode."

As Betelgeuse burns through fuel in its core, it has swollen to massive proportions.

The star has fascinated astronomers for a long time. Because they've observed it so much, the scientists expect it to go through a dimming and brightening cycle every 420 days.

But Betelgeuse caught the attention of astronomers around the world in the fall of 2019 when it began to dim unexpectedly and continued to fade through February. But then, its brightness dipped by two-thirds and the change was visible to the naked eye.

It was the faintest the star had been since measurements of it began 150 years ago.

Astronomers thought it might signify that Betelgeuse may be about to explode in a supernova and continued observing the star. It returned to its normal brightness by April. So, what happened?

The Hubble Space Telescope observed Betelgeuse in ultraviolet light beginning in January 2019, so it was able to contribute information for the star's time line leading up to its dimming event.

Astronomers looking through the Hubble data saw dense material that had been heated moving through the star's atmosphere in fall 2019, from September to November. Hubble clocked the material moving at 200,000 miles per hour. Observations in December provided by ground-based telescopes revealed the star experienced a particular dip in brightness concentrated in its southern hemisphere.

The superheated plasma was released from the star through a large convection cell, like hot bubbles rising in boiling water -- except hundreds of times the size of our sun.

When the star ejected this large amount of hot material comprised of gases, the material cooled as it reached the star's outer layers and formed a dust cloud that blocked starlight from about a quarter of the star's surface.

"With Hubble, we see the material as it left the star's visible surface and moved out through the atmosphere, before the dust formed that caused the star to appear to dim," said Andrea Dupree, lead researcher and associate director of The Center for Astrophysics | Harvard & Smithsonian, in a statement. "Only Hubble gives us this evidence of what led up to the dimming."

Betelgeuse will eventually end its life and explode in a supernova.

"No one knows how a star behaves in the weeks before it explodes, and there were some ominous predictions that Betelgeuse was ready to become a supernova," Dupree said. "Chances are, however, that it will not explode during our lifetime, but who knows?"