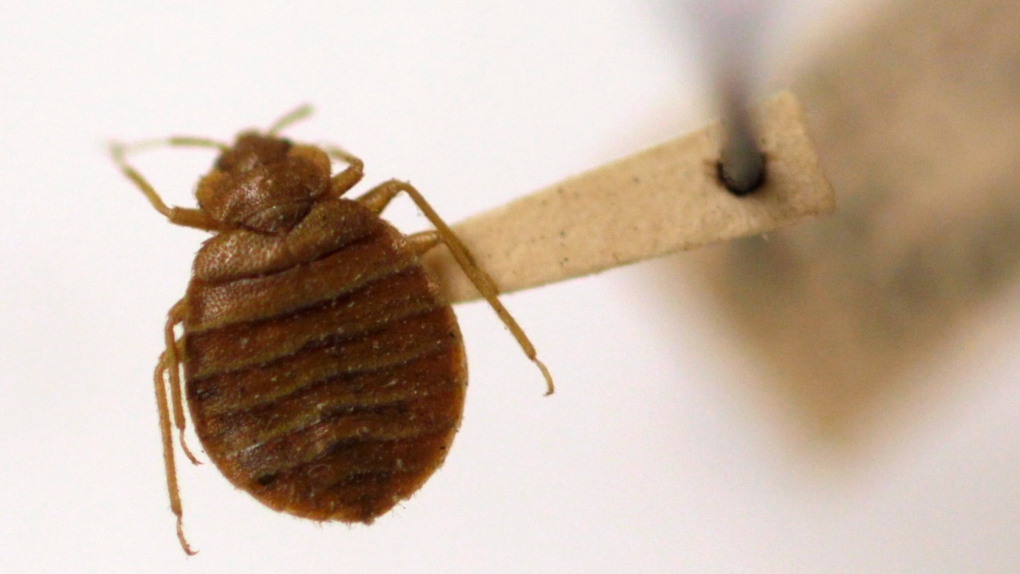 In this March 30, 2011, file photo, a bed bug is displayed at the Smithsonian Institution National Museum of Natural History in Washington. (Carolyn Kaster / AP Photo)

Most people have favourite colours, but new scientific research suggests that the bugs sharing their beds may as well.

The study published in the Journal of Medical Entomology found that bed bugs have a preference for red and black.

Researchers from the University of Florida and Union College created small tent-like shelters for the blood-sucking insects in petri dishes using different colours of cardstock.

Then, a bed bug was placed in the middle of the Petri dish and given 10 minutes to pick one of the harbourages. Overall, the insects were drawn to red and black shelters, while they avoided green and yellow.

"It was speculated that a bed bug would go to any harbourage in an attempt to hide," wrote the authors.

"However, these color experiments show that bed bugs do not hide in just any harbourage; rather, they will select a harbourage based on its colour when moving in the light."

The researchers also conducted various forms of the experiment by looking at different life stages, sexes, fed bugs versus starved bugs, as well as groups compared to individuals.

Corraine McNeill, one of the study's authors and professor of biology at Union College, said they originally thought the bed bugs preferred red because of its association with blood, but now believe they were looking for their fellow sanguivores.

"The main reason we think they preferred red colors is because bed bugs themselves appear red, so they go to these harbourages because they want to be with other bed bugs, as they are known to exist in aggregations," said McNeill in a press release.

However, the study found numerous factors came into play when the bed bugs selected their harbourages, including:

The authors suggest the findings about bed bugs fondness for red and black may help in controlling the pests.

"We are thinking about how you can enhance bed bug traps by using monitoring tools that act as a harborage and are a specific colour that is attractive to the bug," said McNeill.

"However, the point isn't to use the color traps in isolation, but to use color preference as something in your toolkit to be paired with other things such as pheromones or carbon dioxide to potentially increase the number of bed bugs in a trap."

Even though the study suggests bed bugs may be taken with red and black, McNeill cautions that people who are dealing with infestations shouldn't rush to replace their linens with yellow and green ones just yet.

"I always joke with people, 'Make sure you get yellow sheets.' But to be very honest, I think that would be stretching the results a little too much," said McNeill.

"I think using colours to monitor and prevent bed bugs would have to be specifically applied to some sort of trap, and it would have to be used along with another strategy for control. I don't know how far I would go to say don't get a red suitcase or red sheets, but the research hasn't been done yet, so we can't really rule that out completely."