Bats, snakes among species in danger in Canada: COSEWIC 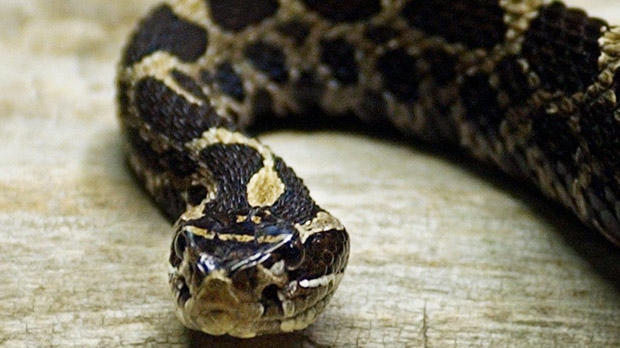 An eastern Massasauga rattlesnake is seen in its exhibit at the Philadelphia Zoo, Sept. 5, 2003. (AP / Chris Gardner)

VANCOUVER -- As the 10th anniversary of the federal Species At Risk Act approaches, dozens of animals and plants have been added to the list considered at-risk.

The Committee on the Status of Endangered Wildlife in Canada has released a report card on species at risk, with a subtle reminder the protections offered under the act do work -- when they're actually applied.

"It's actually implementing those plans that's the problem. There's no legislative requirement to actually do anything in the end," said Eric Taylor, a professor of zoology at the University of British Columbia and one of dozens of committee members who met last week to review the status of 42 species.

The process takes time and money, he said, and then falls victim to government "stalling."

"This is what people have to realize, as well, that it's not cheap to do this process, and to have the government do nothing about it is not only hurting the animals, but taxpayers are not getting good value for money."

The report released Monday adds a dozen species to the endangered list, including the Massasauga rattle snake found on the Georgian Bay Islands.

The committee issued a dire warning about three bat species in Eastern Canada that have declined 90 per cent in just two years due to a deadly fungal disease.

"It's very dire in Eastern Canada," said Graham Forbes, director of the New Brunswick Co-operative Fish and Wildlife Research Centre and a professor at the University of New Brunswick. "There's virtually no bats left."

Forbes said the New Brunswick population of bats has dropped from as many as 10,000 a couple of years ago to a few hundred today, and there is fear that White Nose Syndrome could spread west.

The government of Nova Scotia requested an emergency assessment of the little brown myotis, northern myotis and tri-coloured bats last year after the disease surfaced in that province, New Brunswick, Quebec and Ontario.

The committee listed all three species as endangered in February, and since then nothing has happened.

"Listing would help co-ordinate the activities of the federal and provincial agencies involved," Forbes said.

In September, the environmental law group Ecojustice filed a lawsuit in Vancouver trying to force the federal government to implement habitat protections available under the federal legislation.

The applications ask the Federal Court to order the minister to implement recovery strategies for the Pacific humpback whale, the Nechako white sturgeon, the marbled murrelet and the southern mountain caribou -- all endangered or threatened species listed under SARA that live along the route of a proposed oil pipeline.

Environment Minister Peter Kent has told The Canadian Press in Ottawa that the Conservative government is looking at an overhaul of the Species At Risk law enacted in 2002 by a Liberal government.

Kent said the act can be more efficient and more effective.

There are now 668 wildlife species listed by the committee, including 297 endangered, 159 threatened and 190 of special concern. Twenty-two species are considered extirpated, meaning they are no longer found in the wild.

But there was good news in the report, as well.

The Salish sucker -- a bottom feeding fish found in the Vancouver area -- has been upgraded from endangered to threatened, and the committee said the spotted, northern and Atlantic wolffish are all showing signs of recovery.

"Although still below abundance levels seen in the 1970s, all three species show recent signs of recovery in response to protection and management measures," said the committee report.