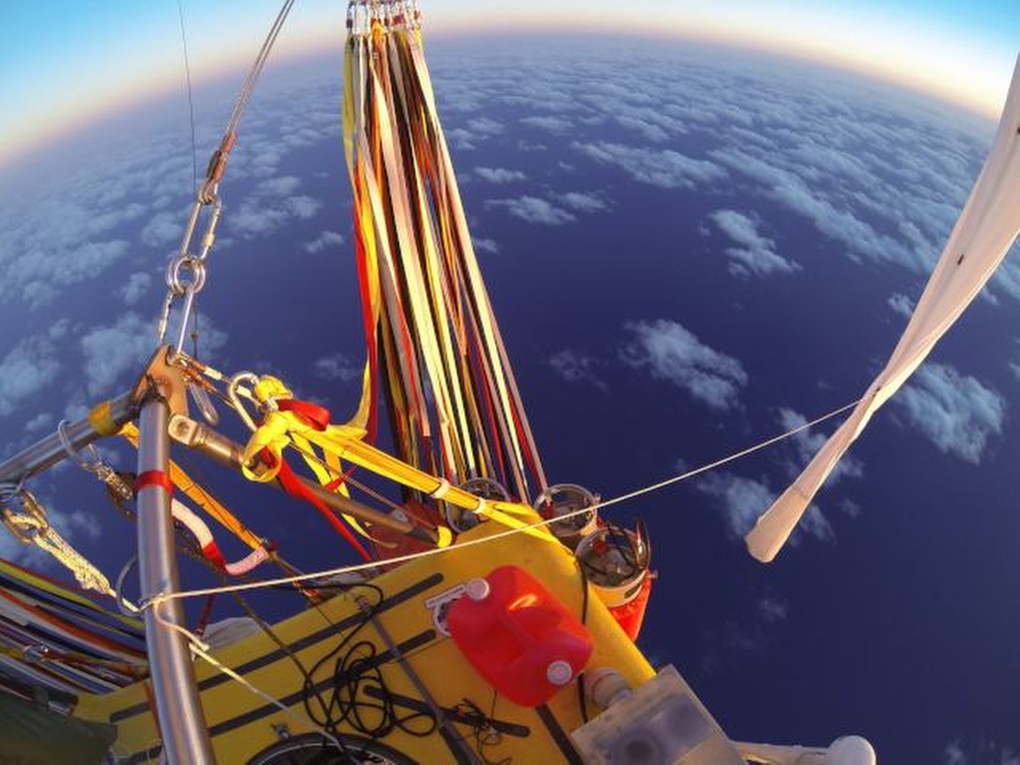 ALBUQUERQUE, N.M. -- Two pilots soaring over the Pacific Ocean made history Thursday, first matching and then surpassing the 8,383-kilometre official world distance record for human flight in a gas balloon.

"There it is! There it is!" shouted team members at the flight's mission control in Albuquerque as a giant screen showed the helium-filled Two Eagles balloon passing the record set by the Double Eagle V in 1981.

The balloon was about 400 miles northwest of San Francisco when it hit the mark. Everyone inside the control room had their smartphones pointed at the screen to document the moment.

In a matter of hours, they hit another milestone in similar fashion when they reached the 8,465-mile mark. That's the distance -- 1 per cent more than the current record -- they needed to meet in their quest to establish a record under international aviation rules.

The distance still has to be confirmed by the Federation Aeronautique Internationale, a process that can take weeks.

"We're not taking any time to celebrate," said Steve Shope, head of mission control. "We have a lot of work we have to do, and we're just taking this flight one hour at a time."

The Two Eagles pilots, Troy Bradley of Albuquerque and Leonid Tiukhtyaev of Russia, are aiming to set both distance and duration records with their flight from Saga, Japan, which began shortly before 6:30 a.m. Sunday Japan time.

The duration record was set in 1978 when Ben Abruzzo, Maxie Anderson and Larry Newman made the first trans-Atlantic balloon flight.

That record of 137 hours, 5 minutes and 50 seconds in the air in a traditional gas balloon is considered the "holy grail" of ballooning achievements. The Two Eagles team expected to surpass that Friday morning.

The pilots had been aiming for Canada until a high-pressure ridge formed off the U.S. West Coast, forcing a sweeping right turn toward Mexico, where they now plan to land on Saturday.

The shifting weather patterns resulted in a flurry of decision-making that made for a "hard night" for the pilots and mission control. Shope said the pilots were in better spirits Thursday after getting some sleep but he acknowledged that being on oxygen for that many days and the high altitude can take a physical toll.

Because weather conditions vary at different altitudes, the pilots traded speed and altitude throughout Thursday so the balloon would track to the south.

"It's a pretty sophisticated dance up there," said Ray Bair, a member of the mission control team.

Rather than head to Canada, they're aiming for the peninsula of Baja California, where volunteer chase crews were being organized to help with the landing.

The balloon is outfitted with an array of monitors and other instruments that are tracking its course and compiling data to be submitted to the record-keepers. With a massive, helium-filled envelope and a specially-designed carbon fiber-composite capsule, it was designed to stay aloft for up to 10 days, but the loss of gas and ballast has shortened that time by a couple of days.

The last task will be a safe landing.

Sand dunes along the peninsula were looking like the best option, Bair said. There are more favourable spots immediately along the Mexican coast, but then come the mountains.