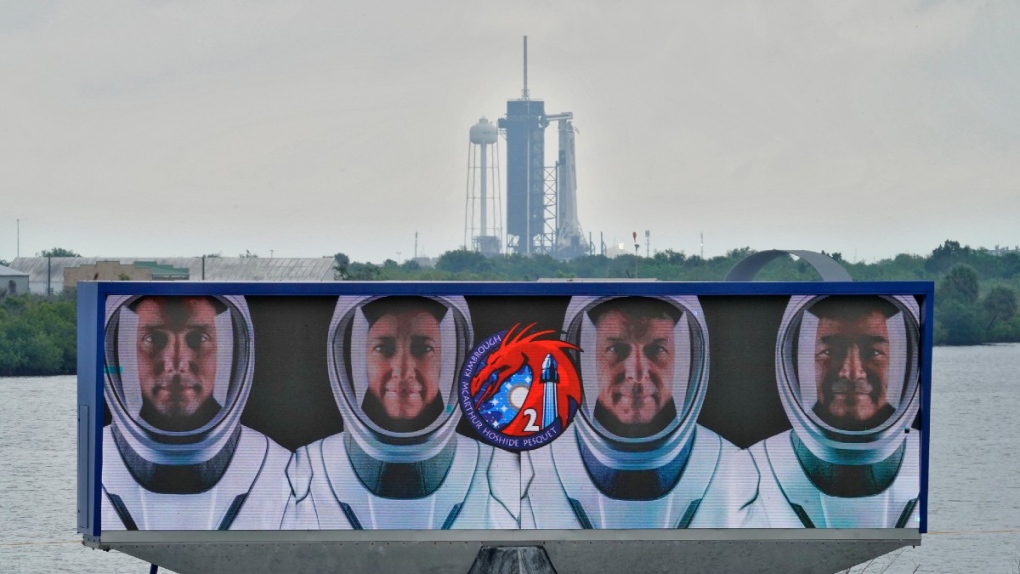 Members of the SpaceX Crew 2, from left, Thomas Pesquet, of the European Space Agency, NASA astronauts Megan McArthur, Shane Kimbrough, and Akihiko Hoshide, of the Japan Aerospace Exploration Agency, are shown on a video screen as the SpaceX Falcon 9 with the crew Dragon capsule sits on Launch Complex 39A, on April 21, 2021. (Chris O'Meara / AP)

CAPE CANAVERAL, FLA. -- SpaceX on Wednesday bumped its next astronaut launch by a day because of dangerously high waves and wind offshore.

Liftoff is now scheduled an hour before sunrise Friday from NASA's Kennedy Space Center, when better weather is expected.

The SpaceX Dragon capsule has the ability to abort the launch all the way to orbit in case of an emergency. That's why good weather is needed not only at the Florida launch site, but all the way up the East Coast and across the North Atlantic to Ireland.

"Although the weather is probably going to look great here at the launch site, we're worried about those downrange winds and wave heights in case of an abort," said Kennedy's director, Robert Cabana, a former astronaut.

The four astronauts from the U.S., Japan and France will spend six months at the International Space Station.

This will be SpaceX's third launch of astronauts for NASA in less than a year. NASA turned to private companies once the shuttle program ended to haul not only supplies to the space station, but also people. SpaceX began delivering cargo in 2012 and flew its first crew up last May.

For the first time, astronauts will be flying in a recycled capsule atop a recycled Falcon rocket. The capsule, dubbed Endeavour after the retired space shuttle, was used for SpaceX's first crew flight. The rocket was used for the company's second crew flight last November.

The four astronauts on that second Spacex flight will return to Earth next Wednesday, assuming Friday's launch occurs. Splashdown will occur in the Gulf of Mexico off the Tallahassee, Florida, coast.

During an outdoor news conference near Kennedy's countdown clock, NASA's acting administrator, Steve Jurczyk, stressed the space station's importance in the agency's effort to return astronauts to the moon. The 260-mile-high (420-kilometre-high) station is also key for Earth observations, he noted.

In Washington, the Senate held a confirmation hearing Wednesday for former U.S. senator Bill Nelson, nominated by President Joe Biden to serve as NASA's next administrator. While a Florida congressman, Nelson flew on space shuttle Columbia in January 1986, just a couple weeks before the Challenger launch disaster.

"There's a lot of excitement going on at NASA right now and you all have seen it," Nelson told the Senate panel, citing Monday's debut flight of a small helicopter on Mars and the return of astronaut launches to Florida.