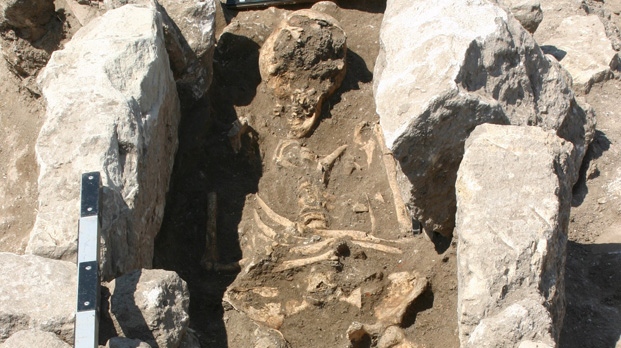 A skeleton of pregnant woman unearthed in Byzantine Troy, from which scientists extracted DNA of bacteria that likely caused her death 800 years ago is shown in this undated handout image. THE CANADIAN PRESS/HO-Gebhard Bieg MANDATORY CREDIT

TORONTO -- It's not the legendary Troy of Agamemnon and Paris, but the site of the ancient city is still giving up secrets to disease detectives who study the evolution of bacteria and other microbes that continue to cause illness in humans today.

An international team of scientists, including experts at McMaster University in Hamilton, have sequenced the genomes of two types of bacteria, whose DNA was preserved in calcified placental abscesses found in the skeleton of a woman who died in Byzantine Troy about 800 years ago.

The 30-year-old woman had been pregnant -- researchers were able to extract the woman's DNA and that of her male fetus -- and had likely died of a urogenital infection caused by one or both of the bacteria, Gardnerella vaginalis and Staphylococcus saprophyticus, which cause genital and urinary tract infections in women to this day.

Her skeleton was unearthed by archeologists in a 13th-century graveyard on the outskirts of Troy, site of the fabled walled city besieged by Greek forces in Homer's "Illiad," located in what is now Anatolia in Turkey.

Co-principal investigator Hendrik Poinar, an evolutionary biologist at McMaster who specializes in ancient DNA, said analysis of genetic material preserved in the remains provides a snapshot of a massive maternal infection after the staph bacteria likely jumped from a cow to the woman. During that period, families typically lived with their livestock.

"It's like capturing evolution in action in a fossil form that we rarely see."

Discovery that the woman had suffered a devastating infection might not have occurred had it not been for the sharp eyes of Henrike Kiesewetter, an archeologist at Tubingen University in Germany, who was part of Project Troia, the dig at Troy.

Dr. Caitlin Pepperell, who led the genomic research with Poinar's lab that was reported online Tuesday in the journal eLife, said Kiesewetter had spotted two calcified nodules below the woman's ribs and thought they might be tubercles, lesions caused by tuberculosis that develop in the lungs.

"I can't emphasize how perceptive she was," said Pepperell, a Canadian-born infectious disease physician and evolutionary biologist at the University of Wisconsin-Madison, describing the nodules as about the size of small strawberries.

"Digging through dirt and rocks and having the wherewithal to see these pretty small, chalky-looking lesions and recognizing them as being possibly biologically important is impressive."

Because Pepperell specializes in the evolution of the bacteria that causes tuberculosis, she was asked to come onboard the project to determine if it was indeed TB that may have killed the woman and her unborn son -- or some other pathogen.

"Who could turn down looking at mystery nodules from Troy from 800 years ago? So I said yes, of course," recalled Pepperell, who in turn got in touch with Poinar to see what his lab could make of the bacterial DNA within the "ghost" cells captured inside the mineralized nodules.

"We fully thought that these were going to be tuberculosis," she said. "In this case, we just got unbelievable amounts of ancient bacterial DNA that were emphatically not tuberculosis."

Instead, Poinar's lab determined through genetic sequencing that the microbes were G. vaginalis, which causes infection in the female genital tract, and S. saprophyticus, a major cause of urinary tract infections.

"The diagnosis I came to is likely chorioamnionitis, a mixed infection that involved bacteria found in the vagina that gets into the placenta and membranes and amniotic fluid in a pregnant woman," said Pepperell. "They can cause premature labour or loss of the pregnancy or sepsis in the mother."

While it's not certain that's what killed the woman, "it seems very likely," she said. "It is a very serious infection and certainly there would have been no effective interventions at that time and place."

Although the genome of the ancient G. vaginalis shows the bug hasn't changed much since the Byzantine period, that isn't the case for the 800-year-old S. saprophyticus, which appears to be more closely related to current bovine strains of the bacteria.

"Maybe if we looked in areas of the world where people live with their livestock now we would find a similar strain. We don't really know."

Besides the cool factor of the research -- we're talking about Troy, after all -- Poinar said the discovery has significance for modern-day health.

"I think this continues to remind us that we live in an environment that is relatively balanced with microbes," he said. "And anything that upsets that balance can lead to novel infection, whether that be from the bugs that live with us normally or new bugs that happen to be in the environment.

"So the more we understand about ... human health in the past, the better we are in terms of thinking meaningfully about novel sources of infections and how they'll manifest themselves," said Poinar, who was instrumental in tracing the genetic evolution of the bacteria that causes bubonic plague, the Black Death that wiped out millions of Europeans in the mid-1300s.