'Atomik' vodka made from Chernobyl crops is safe to drink, scientists say 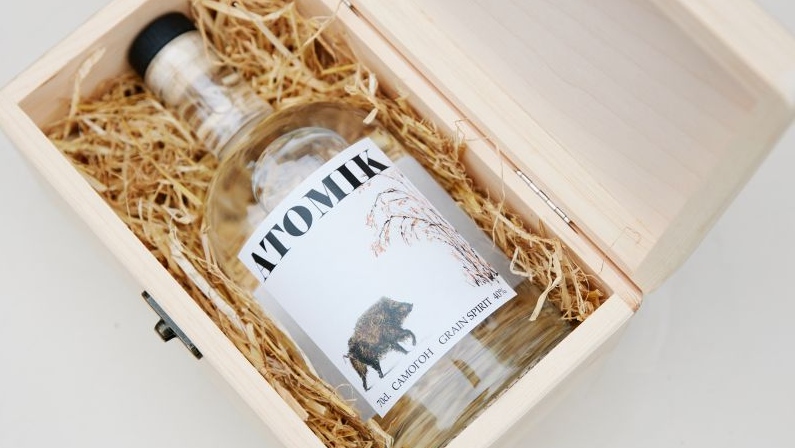 They say a good vodka will put hair on your chest—and British researchers promise that’s all you’d grow after drinking their homemade spirt made with crops from Chernobyl’s abandoned zone.

Scientists from the University of Portsmouth have distilled a bottle of vodka using grains and water from the region surrounding the nuclear disaster exclusion zone.

“We’ve subjected this to a battery of tests and we can’t find any radioactivity,” Jim Smith, professor of environmental science, explained in a video announcing the spirit.

“From a radiological point of view it’s safe to drink.”

Smith, along with colleagues from Ukraine, developed the artisan vodka after a research project into the transfer of radioactivity to crops grown in the Chernobyl Exclusion Zone.

The 1986 explosion at the Chernobyl nuclear plant caused the largest release of radiation and radioactive material in history. The accident exposed millions to dangerous levels of radiation and forced the evacuation of about 350,000 people from hundreds of towns and villages in Ukraine and Belarus.

The 4,200 square kilometre human exclusion zone around Chernobyl was put in place due to chronic radiation fallout.

According to researchers, there was some radioactivity found in the grain used to distill the single bottle of vodka—aptly named “Atomik”—but, because distilling reduces any impurities in the original grain, the final product only registers Carbon-14 at the same level you would expect in other spirits.

Researchers argue their creation proves that many abandoned areas could now be used to grow crops safely.

“We don’t think the main Exclusion Zone should be extensively used for agriculture as it is now a wildlife reserve,” said Smith in a press release.

Smith hopes the vodka—which is described as more of a “high quality moonshine”—can also help support economic development in the region.

“I think this is the most important bottle of spirits in the world because it could help the economic recovery of communities living in and around the abandoned areas,” he said.

“Many thousands of people are still living in the Zone of Obligatory Resettlement where new investment and use of agricultural land is still forbidden.”

Researchers note that there are some legal issues to overcome before “The Chernobyl Spirit Company” can begin production of their moonshine, but they hope to bring small scale production sometime this year.

Once produced, 75 per cent of the profits will be donated to the affected communities.