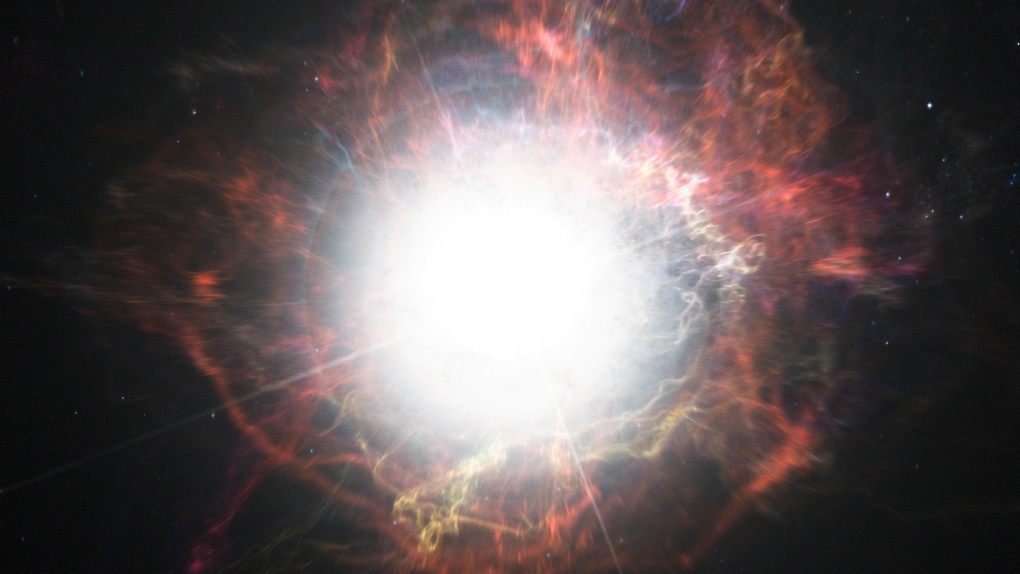 This illustration made available by the European Southern Observatory in 2014 shows shows dust surrounding a supernova explosion. (M. Kornmesser/ESO via AP)

TORONTO -- The mystery behind the origins of a supernova first spotted by 12th-century Chinese and Japanese astronomers has been solved, according to an international team of 21st-century astronomers.

New research, published Wednesday in The Astrophysical Journal, has linked astronomical reports from more than 800 years ago with a faint, fast-expanding nebula surrounding Parker's Star, one of the hottest stars in the Milky Way galaxy.

The nebula, dubbed Pa30, fits the profile, location and age of the supernova, which was originally documented in 1181 AD.

"The historical reports place the guest star between two Chinese constellations, Chuanshe and Huagai," Albert Zijlstra, astrophysics professor at the University of Manchester, said in a news release. "Parker's Star fits the position well. That means both the age and location fit with the events of 1181."

The first astronomers to lay eyes on the supernova, referred to as SN 1181, described it being as bright as the planet Saturn and remaining visible for six months, the authors of the study said.

Previous research has suggested Parker's Star and the Pa30 nebula may be the result of the merging of two white dwarf stars. Such events are thought to lead to a rare and faint type of supernova called a “Type Iax” supernova.

"Only around 10 per cent of supernovae are of this type and they are not well understood. The fact that SN 1181 was faint but faded very slowly fits this type," Zijlstra said. "It is the only such event where we can study both the remnant nebula and the merged star, and also have a description of the explosion itself."

The key to unlocking the mystery of this historical supernova was the discovery that the Pa30 nebula is expanding at a velocity of more than 1,100 kilometres per second. From this, researchers were able to calculate the nebula's age to be around 1,000 years old, which coincides with the events of 1181 AD.

"Combining all this information such as the age, location, event brightness and historically recorded 185-day duration, indicates that Parker's Star and Pa30 are the counterparts of SN 1181," Zijlstra said. "This is the only Type Iax supernova where detailed studies of the remnant star and nebula are possible."

There have been five supernovae in the Milky Way in past millennium, and up until now, SN 1181 was the only one whose origins remained unknown.

"It is nice to be able to solve both a historical and an astronomical mystery," Zijlstra said.

The team of astronomers who made the discovery hail from Hong Kong, the U.K., Spain, Hungary and France.