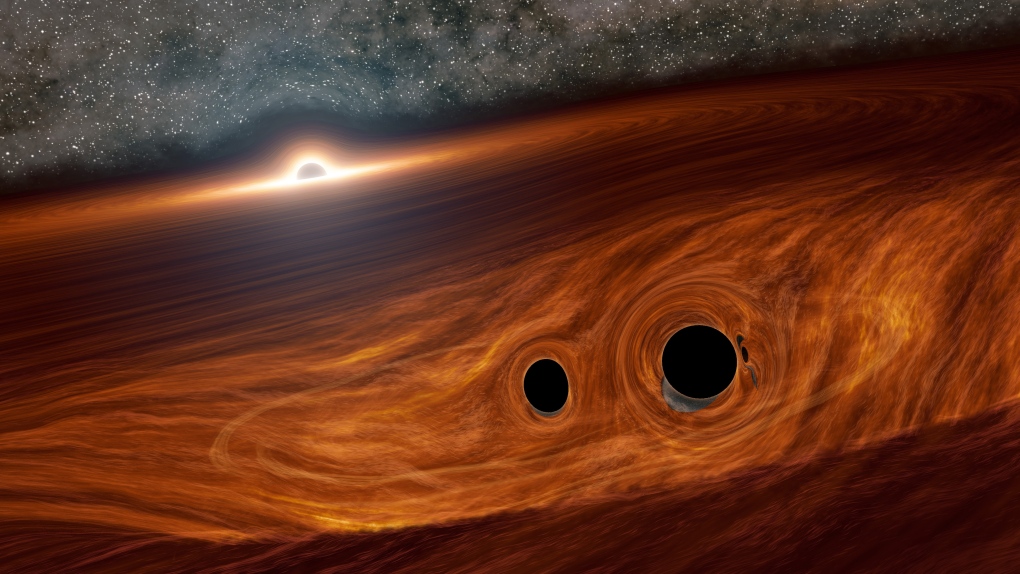 Astronomers may have detected light from colliding black holes for the first time. (Robert Hurt/California Institute of Technology/CNN)

When black holes collide, they typically create gravitational waves that can be detected on Earth, but not light. Now, for the first time, astronomers believe they have detected the first light from a black hole merger.

Gravitational waves, or ripples in space and time, don't produce light. However, when a black hole merger was observed by ground-based gravitational wave detectors on May 21, 2019, astronomers saw what they think was a flare of light.

This flare of light matters because it will help astronomers learn more about black holes, where gravity is so strong nothing can usually escape, and the role they play in the formation and development of the universe.

"The reason looking for flares like this is so important is that it helps enormously with astrophysics and cosmology questions," said Mansi Kasliwal, study coauthor and an assistant professor of astronomy at Caltech.

"If we can do this again and detect light from the mergers of other black holes, then we can nail down the homes of these black holes and learn more about their origins."

The merger was first detected by the National Science Foundation's Laser Interferometer Gravitational-wave Observatory, or LIGO, as well as the European Virgo detector in Italy. They called the event S190521g.

During the detection, the California Institute of Technology's Zwicky Transient Facility, or ZTF, at the Palomar Observatory near San Diego was performing a robotic survey of the sky. It can see objects that release flares or erupt in our sky. The survey data showed a flare, caused by an active supermassive black hole, traced back to the area where the gravitational wave event occurred.

"This supermassive black hole was burbling along for years before this more abrupt flare," said Matthew Graham, lead study author, research professor of astronomy at Caltech and the project scientist for ZTF, said in a statement.

"The flare occurred on the right timescale, and in the right location, to be coincident with the gravitational-wave event. In our study, we conclude that the flare is likely the result of a black hole merger, but we cannot completely rule out other possibilities."

HOW LIGHT EMERGES FROM BLACK HOLES

Prior to this detection, some astronomers had explored how black hole mergers may result in light flares. Although light itself can't escape from black holes, the heated disk of material around black holes can release light.

In this case, Graham and his fellow researchers suggest that the two black holes were actually together in the disk around a much larger black hole.

"At the center of most galaxies lurks a supermassive black hole. It's surrounded by a swarm of stars and dead stars, including black holes," said K. E. Saavik Ford, study coauthor, professor of astronomy at the Borough of Manhattan Community College and astrophysicist at the American Museum of Natural History, in a statement.

"These objects swarm like angry bees around the monstrous queen bee at the center. They can briefly find gravitational partners and pair up but usually lose their partners quickly to the mad dance. But in a supermassive black hole's disk, the flowing gas converts the mosh pit of the swarm to a classical minuet, organizing the black holes so they can pair up."

A new, larger black hole results in the merging of the two black holes. This action essentially sends it barreling through the gas in the disk. The way the gas reacts to the speed of the black hole's movement creates a flare bright enough for telescopes to detect, the researchers said.

Although the survey didn't spot the black hole merger immediately, images captured by the survey in the days after the gravitational wave event showed that the flare faded slowly over a month.

More data would have offered more details about the light created by the merger and provide more evidence that it was created by two black holes coming together.

However, the researchers have ruled out other possible causes, such as a supernova when a star reaches the end of its life, or something called a tidal disruption event when a black hole eats a star.

Within the next few years, the new black hole formed by the merger is expected to showcase another flare as it enters the disk of the supermassive black hole again -- and ZTF will be poised to spot it.