Astronomers find mysterious object in space 'unlike anything' seen before 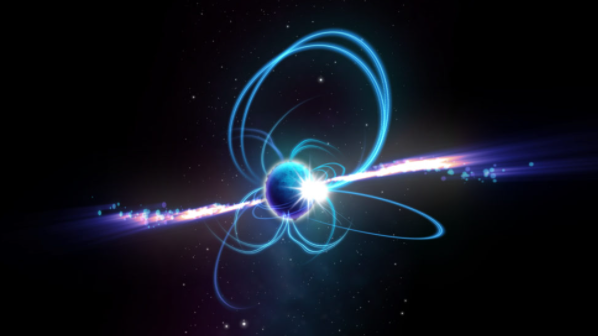 An artist’s impression of what the object might look like if it’s a magnetar. Magnetars are incredibly magnetic neutron stars, some of which sometimes produce radio emission. Known magnetars rotate every few seconds, but theoretically, 'ultra-long period magnetars' could rotate much more slowly. Credit: ICRAR.

Astronomers have found a mysterious object in space that is “unlike anything” they have seen before.

A team mapping radio waves in the universe discovered the celestial object that releases a giant burst of energy three times in an hour, according to a release from the International Centre for Radio Astronomy Research (ICRAR).

The discovery is also the subject of a study published in the journal Nature.

Researchers believe the object could be either a neutron star or white dwarf, characterized as a collapsed core of stars, with a powerful magnetic field.

Spinning around in space, the object sends out a beam of radiation that crosses Earth’s line of sight, and for one minute every twenty minutes it is one of the brightest radio sources in the sky, the release states.

“This object was appearing and disappearing over a few hours during our observations, that was completely unexpected. It was kind of spooky for an astronomer because there is nothing known in the sky that does that,” said astrophysicist and team leader Natasha Hurley-Walker in the release. “And it’s really quite close to us – about 4,000 lightyears away. It’s in our galactic backyard.”

Objects in space that “turn on and off” are not a new thing to astronomers, they are called “transients.” Slow transients like a supernova might appear over a few days and then disappear after a few months, whereas fast transients like pulsars flash on and off within milliseconds of seconds.

But an object that turns on for a minute and then off is unheard of. The object is very bright, smaller than the sun, and emits highly-polarized radio waves, which suggest it has a very strong magnetic field.

Hurley-Walker is now monitoring the object with the Murchison Widefield Array (MWA) telescope located in the outback of Western Australia, to see if it switches back on.

“If it does, there are telescopes across the Southern Hemisphere and even in orbit that can point straight to it,” she said in the release.

Crown prosecutors want Ottawa protest organizer Tamara Lich sent back to jail to await trial, claiming she breached her bail conditions by agreeing to participate in an event next month where she will receive a 'Freedom Award.'

Prince Charles and Camilla, Duchess of Cornwall, lit candles and listened to a prayer service on Wednesday inside a gilded Ukrainian Orthodox cathedral in Ottawa, while congregants and onlookers waved blue-and-yellow flags and Union Jacks outside.

The pathologist who conducted an autopsy on Chantel Moore says the 26-year-old Indigenous woman was shot twice in the chest, once in the abdomen and once in her left leg.

Even though it is spring, some Manitobans were in for a cool surprise over the weekend as ice piled up on the shore of Lake Winnipeg, creating what looked like giant hills of ice.