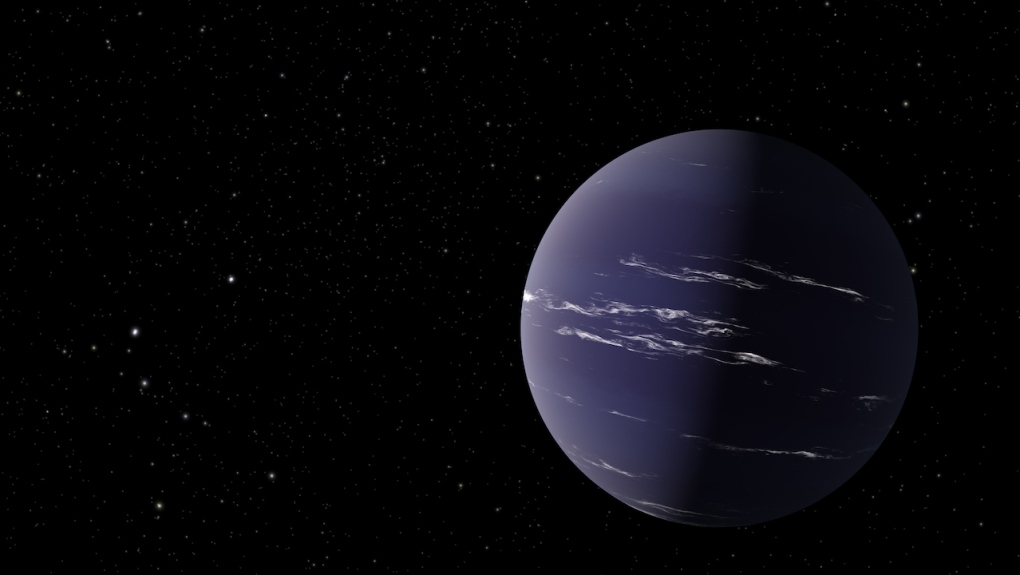 Astronomers have discovered a planet around 90 light years away from Earth and similar to Neptune in terms of size. This artist's impression shows what the planet named TOI-1231 b may look like. (NASA/JPL-Caltech)

TORONTO -- An international team of astronomers say they've discovered a "weird" planet with temperatures that are relatively similar to Earth's.

Astronomers from NASA's Jet Propulsion Laboratory (JPL) and the University of New Mexico have discovered a planet around 90 light years away from Earth and similar to Neptune in terms of size.

The discovery was made using NASA's Transiting Exoplanet Survey Satellite, a space telescope used to search for planets outside of our solar system, known as exoplanets. It was also followed up using the Planet Finder Spectrograph, which is a specialized telescope located in Chile and also used for finding exoplanets.

The planet, which has been named TOI-1231 b, orbits a red dwarf star that is smaller than our sun. Red dwarf stars, also known as M dwarfs, are the most common type of star in our galaxy, as they make up 70 per cent of all stars in the Milky Way.

TOI-1231 b also has an orbit that is much closer to the star than the Earth's orbit to the sun. On the planet, one year -- as defined by one complete orbit around its star -- is only 24 days.

Given that red dwarf stars are not as hot as our sun, ​temperatures on TOI-1231 b are around 57 C. While warm by Earth standards, researchers say these temperatures are quite cool compared to similar planets.

"This new planet we've discovered is still weird," said NASA JPL scientist Jennifer Burt in a news release. "Compared to most transiting planets detected thus far, which often have scorching temperatures in the many hundreds or thousands of degrees, TOI-1231 b is positively frigid."

This discovery could be the first step in conducting atmospheric studies for similarly sized exoplanets and determining what kind of gas the atmosphere consists of, whether it's hydrogen, a dense water vapor or a combination of hydrogen and helium.

"Each of these would point to a different origin, allowing astronomers to understand whether and how planets form differently around M dwarfs when compared to the planets around our Sun, for example," said University of New Mexico professor Diana Dragomir in a news release.

Burt says it's also possible that the relatively cool temperatures on this planet could be the result of water clouds.

"TOI-1231 b is one of the only other planets we know of in a similar size and temperature range, so future observations of this new planet will let us determine just how common (or rare) it is for water clouds to form around these temperate worlds," said Burt.

The research team is expected to publish their findings in a future issue of The Astronomical Journal.​