As walrus arrive by the thousands, Alaska village tells visitors to stay away 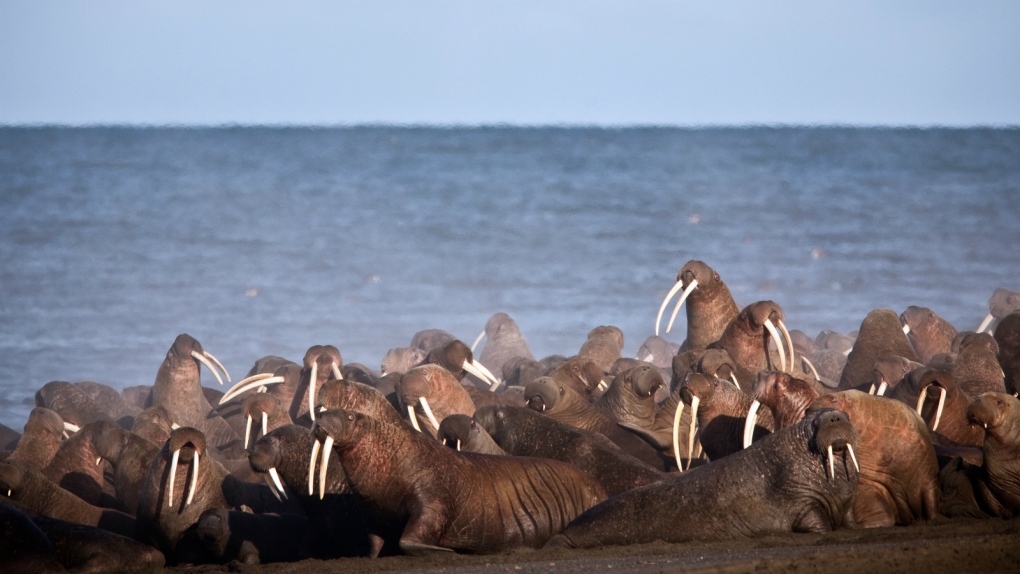 Walruses gather to rest on the shores of the Chukchi Sea near the coastal village of Point Lay, Alaska on Sept. 2013. (Ryan Kingsbery / United States Geological Survey)

Pacific walrus by the thousands in recent years have come ashore in early fall near the Inupiat village of Point Lay, including about 6,000 last week, and people have dropped in, hoping to see a marine mammal phenomenon brought on by climate change and disappearing summer sea ice in the Chukchi Sea.

However, Point Lay, population 270, has no hotel or restaurants. And walrus to residents are a major food source, not a curiosity. Disturbances by boats or airplanes can spook walrus into stampedes that crush the smallest animals.

So Point Lay is working with the U.S. Fish and Wildlife Service on an information campaign: Thanks for the interest, but please don't stop by.

"They've had people come and had no place to accommodate them and they ended up having to tell the person to get back on the plane and head out," said Andrea Medeiros, spokeswoman for the agency in Anchorage. "I would imagine it's a very awkward situation for them."

The walrus can't even be seen from the village.

"You have to travel across a cove to get to where the animals are," Medeiros said. Visitors would need a ride from a resident and the trip can be hazardous.

"They're actually on a barrier island," she said.

Walrus started coming ashore on the northwest Alaska coast in 2007. In September last year, 35,000 packed a rocky beach near Point Lay. The carcasses of more than 130 mostly young walruses were counted after a stampede in September 2009 at Icy Cape.

Walrus prefer spreading out on sea ice, where they can monitor the approach of predators such as polar bears.

Many adult male walrus stay south of the Bering Strait year-round. However, females with calves stay on the edge of pack ice, where the young can rest as mothers dive for clams.

As the sea ice melts, the edge moves north, providing a moving platform over the shallow Bering and Chukchi seas.

In recent years, as Arctic temperatures have warmed, the edge of the sea ice has receded far to the north over water too deep for walrus to dive and reach the ocean bottom. Walrus have the choice of resting on ice over deep water or moving to shore, joined by thousands of other animals.

Remnant ice floating in the Chukchi gave walrus a safe platform this year until Friday, when about 6,000 of them came ashore near Point Lay. They appear to have since moved on, likely to Russia, Joel Garlich-Miller, a walrus biologist with the U.S. Fish and Wildlife Service, said in a Tuesday statement.

Leo Ferreira, Point Lay Tribal Council president, in an interview with Sitka radio station KCAW last year urged the media to keep its distance and reacted angrily when a photographer flew near the walrus. He issued a statement Friday reiterating a "no media" policy while walrus are on shore.

The U.S. Fish and Wildlife Service works with the Federal Aviation Administration to discourage airplanes from flying near walrus.

The agency also has received a two-year, $140,000 grant from the National Fish and Wildlife Foundation to help Point Lay.

The grant will pay to train Point Lay young people in photography, videography and film production that could be used on a website about walrus coming ashore. The goal is to keep people informed while warning them of the hazards and discouraging them from visiting.

The grant also will pay for villagers to monitor walrus coming ashore over about 50 miles of ocean beach, and to collect data including the age, sex and cause of any walrus deaths.

Walrus herds are just one change brought to Point Lay by climate change. The frozen ground on which the village is built is melting. Over the summer, soil weakened ground between a river and the lake where Point Lay drew water. A canal developed and drained the lake. The community has water in storage tanks that should last about a year, giving residents time to find a new water source.