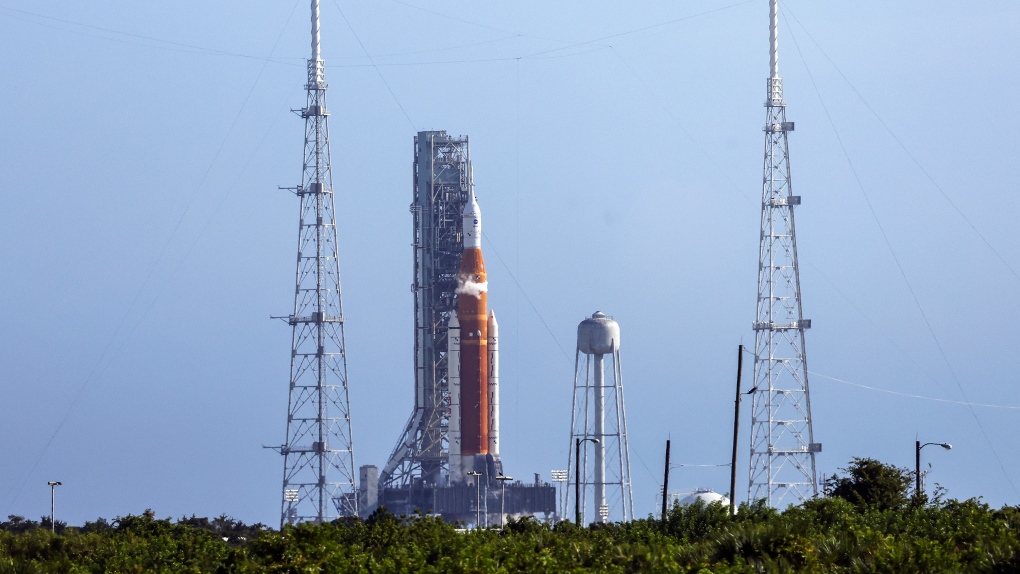 The Artemis I mega moon rocket is ready for another test before its next launch attempt to journey around the moon and back.

The launch director gave the "go" to begin tanking for the Artemis I cryogenic demonstration test at 7:30 a.m. ET Wednesday, and NASA will share live coverage on its website. If all goes well, the team expects the test to be completed by 3 p.m. ET.

The Space Launch System rocket and Orion spacecraft continue to sit on the launchpad at Kennedy Space Center in Florida.

Since the second scrubbed launch attempt of the uncrewed Artemis I mission on September 3, engineers have replaced two seals on an interface for the liquid hydrogen fuel line between the rocket and mobile launcher, according to NASA officials. These seals were associated with a large hydrogen leak that led to the scrub of the launch attempt.

When engineers replaced the seal on an 20-centimetre quick disconnect line for hydrogen, they found an indentation, said Mike Sarafin, Artemis mission manager, at a Monday NASA press conference.

The indentation was under 0.3 millimetre, but it allows pressurized gas to leak through, something that can be very dangerous given the flammability of hydrogen when it meets air. The team believes the dent is associated with the leak, but the results of the test could confirm it.

The purpose of the cryogenic demonstration is to test the seals and use updated, "kinder and gentler" loading procedures of the supercold propellant, which is what the rocket would experience on launch day.

Unlike the wet dress rehearsals, the previous tests of Artemis I that simulated every stage leading up to launch, the cryo test focuses on a very specific aspect in the countdown: loading supercold liquid oxygen and liquid hydrogen into the rocket's core stage and upper stage.

The Orion spacecraft and rocket boosters will remain unpowered during the test, and the team does not intend to go into terminal count, or the final 10 minutes that occur in the countdown before launch, said Jeremy Parsons, deputy manager for NASA's Exploration Ground Systems Program at Kennedy Space Center.

The kinder and gentler loading procedure is to minimize pressure spikes and thermal spikes witnessed during prior launch attempts. To achieve this, the team will slowly bring up the pressure on the liquid hydrogen storage tank. The slower procedure is estimated to add no more than 30 minutes to the process, Parsons said.

"It's going to be a very slow, steady ramp," Parsons said. "So (we're) really just trying to slowly introduce some of those thermal differences and reduce thermal and pressure shock."

Liquid oxygen is relatively dense, about the density of water, and it is pumped into the rocket. Meanwhile, hydrogen is very light, so it is moved using pressure rather than being pumped, said Tom Whitmeyer, deputy associate administrator for NASA's common exploration systems development.

The new loading operations will use a slower rate of pressure with more gradual temperature changes, Whitmeyer said.

The test will also include an engine bleed, which chills the engines for launch. The mission team scrubbed the first Artemis I launch attempt on August 29 largely due to an issue with a faulty sensor that occurred during this bleed.

After both liquid oxygen and liquid hydrogen reach the replenishing phase -- because some of the supercold propellant boils off -- the team will conduct a pre-pressurization test.

"The test will bring the liquid hydrogen tank up to the pressure level it will experience just before launch while engineers calibrate the settings for conditioning the engines at a higher flow rate, as will be done during the terminal count," according to NASA officials. "Performing the pressurization test during the demonstration will enable teams to dial-in the necessary settings and validate timelines before launch day, reducing schedule risk during the launch countdown."

If the cryo test goes well, the next launch attempt could take place on Tuesday, September 27, with a 70-minute window that opens at 11:37 a.m. ET. The mission managers will meet to discuss the test results on September 25 to assess the potential launch date.

The Artemis team is receiving daily briefings about Hurricane Fiona in case it has any impact on whether or not the rocket stack needs to be rolled back into the Vehicle Assembly Building, a process that can take three days.

If Artemis I launches on September 27, it would go on a 39-day mission and return to Earth on November 5. Another backup launch date is possible on October 2. While these launch dates are recommended by NASA, the team ultimately depends on a decision by the US Space Force, which would need to issue a waiver for the launch.

The US Space Force, an arm of the military, still oversees all rocket launches from the United States' East Coast, including NASA's Florida launch site, and that area is known as the Eastern Range.

The officials at the range are tasked with making sure there's no risk to people or property with any launch attempt.

The Artemis team continues to have "productive and collaborative" discussions with the Eastern Range, and NASA is sharing additional detailed information requested by the Space Force for review.

"We're going to go when we're ready," Sarafin said. "But in terms of the reward of flying this flight, we have said from the outset that this is the first in an increasingly complex series of missions, and it is a purposeful stress test of the rocket."

The inaugural mission of the Artemis program will kick off a phase of NASA space exploration that intends to land diverse astronaut crews at previously unexplored regions of the moon -- on the Artemis II and Artemis III missions, slated for 2024 and 2025, respectively -- and eventually deliver crewed missions to Mars.

The agency released on Tuesday an updated version of its "Moon to Mars" objectives, which lays out a blueprint for solar system exploration.

"The objectives will help ensure a long-term strategy for solar system exploration can retain constancy of purpose and weather political and funding changes."