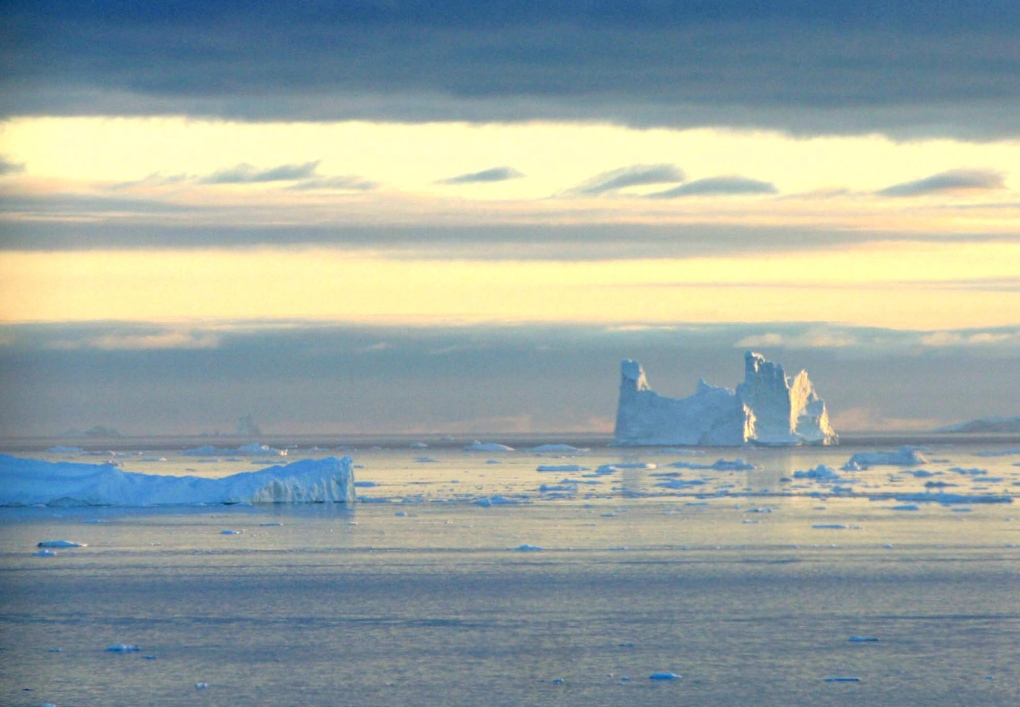 An iceberg is seen in Disko Bay, Greenland, above the arctic circle in this Thursday Aug. 18, 2005 file photo. (AP / John McConnico)

An international study suggests greenhouse gases are acidifying the Arctic Ocean at a faster rate than any of the world's southern seas.

"What we know is that ocean acidification is actually stronger in the Arctic than in southern waters," said Rashid Sumalia, a University of British Columbia researcher, who is one of 60 authors of the report released Monday in Bergen, Norway.

That makes the Arctic an early warning system for the planet's other oceans, the report concludes. But so little is known about northern waters that educated guesswork is the only tool scientists have to predict the impact.

"It's really frustrating from the biological point of view because we don't have much information," said co-author Sam Dupont from the University of Gothenburg in Sweden.

The report, the first on acidification of the Arctic Ocean, is to be presented next week at a meeting in Sweden of the Arctic Council, an eight-member group of countries that ring the North Pole. Canada will assume the council's chairmanship for a two-year term at that meeting.

Ocean acidification occurs when carbon dioxide, the main greenhouse gas, is absorbed by ocean waters. The dissolved gas forms a weak acid and enough of it can change the pH level of large ocean areas.

The process is more pronounced in the Arctic, the study concludes, because cold water absorbs carbon dioxide more readily than warm water.

As well, northern seas are more exposed to the atmosphere as ice cover recedes and large amounts of freshwater coming in from huge rivers such as Canada's Mackenzie and Russia's Lena reduce the ability of the ocean to buffer acidity.

The result is that some Arctic waters are already so acidic that they are at a threshold where sea creatures are likely to have trouble building shells, which are made of highly alkaline calcium carbonate.

"The Arctic Ocean is one of the most sensitive ocean regions regarding the ocean acidification response to CO2 uptake and will be the first ocean to undergo basin-wide acidification," says the report.

Effects are already being felt across the Canadian Arctic, including in the Beaufort Sea and in Lancaster Sound, said program head Russel Shearer.

Overall, oceans around the globe have became an average of 30 per cent more acidic over the last 200 years, the report suggests.

But it doesn't offer figures on how much worse the Arctic is, or how quickly things are changing, or how bad the problem is. Acidification varies too strongly from place to place and from time to time, Shearer said.

"The big issue here is the huge knowledge gap of information that is needed, both in terms of ocean data information about what the levels are and how they're increasing, and at what rate. It differs across all parts of the Arctic."

But there will be effects, said Sumalia, including on commercially important species such as Arctic char and cod. Northern food webs are so short and simple that any impact on one species is soon felt by all.

"You can touch only one part of the ecosystem and the ripple effect can go through the whole food web," he said. "It's most of the northern species we're talking about here."

About 10 per cent of the world's fish are caught in the Arctic. Northern aboriginals are particularly dependent on maritime resources.

Scientists so far can make few predictions about the fate of those fisheries, Dupont said.

"We know the chemistry is changing. But we don't know what will be the consequences."

Acidification is occurring in conjunction with a range of changes induced by global warming in the Arctic, the report points out. Adaptations will have to be broadly based.

When the report is presented next week to politicians -- including Canada's Health Minister Leona Aglukkaq, who will be the chairwoman of the Arctic Council -- it is to be accompanied by a report on policy recommendations.

Dupont said there's really only one recommendation that will make any difference.

"We know more than enough to say that we should become better at the CO2 emission problem. We need to reduce CO2.

"That's the only thing we can do if we want to tackle the ocean acidification problem."