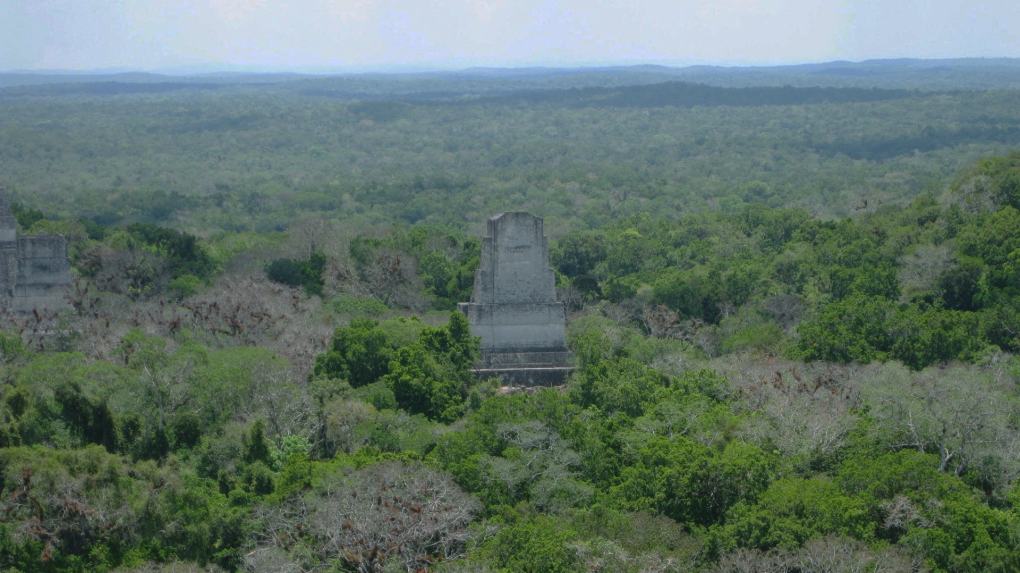 The Tikal site, taken from one of the temples there (Courtesy S. Houston/Antiquity)

TORONTO -- Despite the ruins of Tikal being one of the most thoroughly studied archeological sites in the world, archeologists recently uncovered a hidden neighbourhood near the ancient Maya city.

Experts have been excavating areas of Tikal in modern-day Guatemala since the 1950s, but the new discovery left Mesoamerican scholars questioning whether they know the ancient city as well as they previously thought.

Using light detection and ranging software known as lidar, scientists with a research consortium called the Pacunam Lidar Initiative were able to find a neighbourhood of ruined buildings designed to look like those in Teotihuacan, the largest and most powerful city in the ancient Americas, just a short walk from what was formerly Tikal's city center.

After many decades spent documenting details of every structure and excavated item in Tikal, it was long assumed that the neighbourhood was an area of natural hills.

The findings were published Tuesday in the journal Antiquity.

The lidar analysis was led by Stephen Houston, a professor of anthropology at Brown University, and Thomas Garrison, an assistant professor of geography at the University of Texas, and was followed with a subsequent excavation by a team of Guatemalan archaeologists.

Houston said in a press release that the findings have has prompted new insights on Teotihuacan’s influence on the Maya civilization.

"What we had taken to be natural hills actually were shown to be modified and conformed to the shape of the citadel -- the area that was possibly the imperial palace -- at Teotihuacan," Houston said. "Regardless of who built this smaller-scale replica and why, it shows without a doubt that there was a different level of interaction between Tikal and Teotihuacan than previously believed."

Houston said Tikal and Teotihuacan were two different cities. Tikal was fairly populous, but small in scale, while Teotihuacan, which is in modern-day Mexico, was an empire.

Though little is known about those who founded and governed Teotihuacan, researchers have found that their influence extended far beyond their city walls. Much like the Romans, there has been evidence that the people of Teotihuacan shaped and colonized numerous communities across the Americas.

Houston said that anthropologists have known for some time that residents of the two cities were in contact and often traded with one another, centuries before Teotihuacan conquered Tikal around the year 378 AD.

According to the study, there is also sample evidence suggesting that Maya elites and scribes lived in Teotihuacan between the second and sixth centuries AD and brought elements of the empire's culture, including its funerary rituals, slope-and-panel architectural style and green obsidian, back to Tikal.

However, the latest lidar analysis and excavations show that the imperial did more than just trade with and culturally influence the smaller city of Tikal.

Houston said that the architectural complex they found "very much" appears to have been built for people from Teotihuacan or those under the empire's control.

"Perhaps it was something like an embassy complex, but when we combine previous research with our latest findings, it suggests something more heavy-handed, like occupation or surveillance. At the very least, it shows an attempt to implant part of a foreign city plan on Tikal," he said in the release.

According to the study, the structures were designed to be smaller replicas of the buildings that make up Teotihuacan’s citadel, including its intricate cornices and terraces, as well as the specific 15.5-degree east-of-north orientation of the complex's platforms.

Excavations confirmed that some of the newly found buildings were constructed with mud plaster instead of the traditional Maya limestone.

"It almost suggests that local builders were told to use an entirely non-local building technology while constructing this sprawling new building complex," Houston said.

"We’ve rarely seen evidence of anything but two-way interaction between the two civilizations, but here, we seem to be looking at foreigners who are moving aggressively into the area," he added.

Archeologists also uncovered projectile points crafted with flint, a material commonly used by the Maya, and green obsidian, a material used by those of Teotihuacan, at an adjacent complex of residential buildings, suggesting conflict.

In addition, archeologists recovered the remains of a body surrounded by vessels, ceramic fragments, animal bones and projectile points near the replica citadel. The study notes that the site was rimmed by charcoal, suggesting it had been set on fire.

Houston said in the press release that this finding shows "little resemblance" to other burials or sacrifices at Tikal, but is "strikingly similar" to the remains of warriors found in Teotihuacan years ago.

"Excavations in the middle of the citadel at Teotihuacan have found the burials of many individuals dressed as warriors, and they appear to have been sacrificed and placed in mass graves," he said. "We have possibly found a vestige of one of those burials at Tikal itself."

Despite finding the previously lost neighbourhood, Houston says there is still much to uncover and analyze, including human remains, which will be studied to determine their origins and could reveal more about Teotihuacan’s relationship with Tikal.

Houston said he hopes further excavations will help researchers better understand Teotihuacan’s presence in Tikal, as well as how its imperial power changed the cultural and political landscape in Mesoamerica.

"Before European colonization of the Americas, there were empires and kingdoms of disproportionate influence and strength interacting with smaller civilizations in a way that left a large impact," Houston said. "Exploring Teotihuacan’s influence on Mesoamerica could be a way to explore the beginnings of colonialism and its oppressions and local collusions."