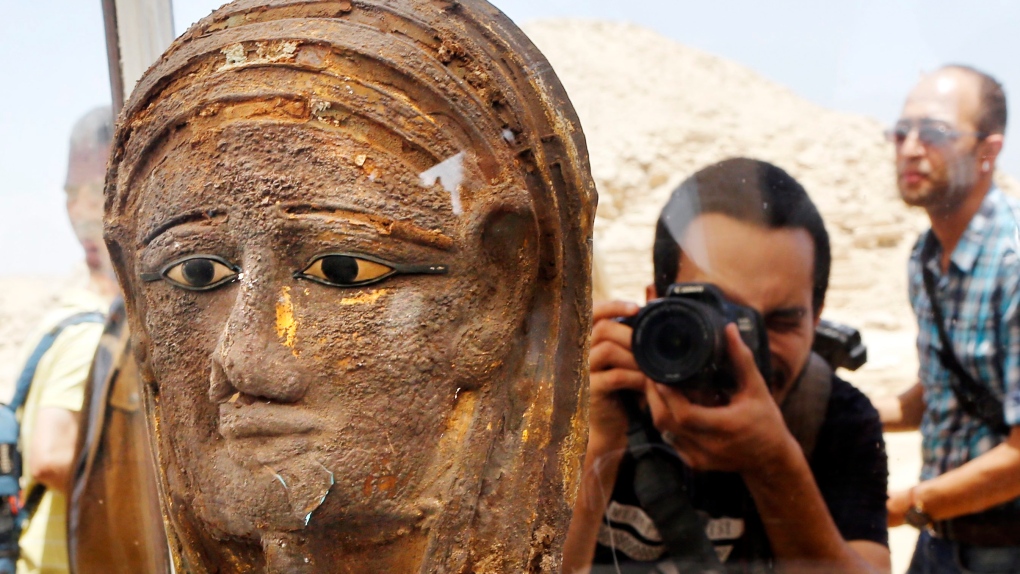 A photographer films a gilded silver mummy mask found on the face of the mummy of the second priest of Mut, as it is displayed during a press conference in front of the step pyramid of Saqqara, in Giza, Saturday, July 14, 2018. (AP Photo/Amr Nabil)

CAIRO -- Archeologists in Egypt stumbled upon a new discovery dating back to more than 2,500 years ago near Egypt's famed pyramids at an ancient necropolis south of Cairo.

The discovery which includes a mummification workshop and a shaft, used as a communal burial place, is located at the Saqqara necropolis of Memphis, the first capital of ancient Egypt. Memphis, a UNESCO World Heritage Site, and its vast necropolis are home to a wide range of temples and tombs as well as the three renowned Giza pyramids.

The latest find, announced at a press conference Saturday, belongs to the Saite-Persian Period, from 664-404 B.C. The site, which lies south of the Unas pyramid, was last excavated more than 100 years ago, in 1900.

In the mummification workshop, an embalmer's cachette holding a large collection of pottery vessels, bowels and measuring cups were found. Archeologists believe the findings will reveal more about the oils used in the mummification process in the 26th Dynasty.

"We are in front of a goldmine of information about the chemical composition of these oils," said Ramadan Hussein, the head of the German-Egyptian mission, at the press conference.

Among the artifacts found were fragments of mummy cartonnages, canopic cylindrical jars and marl clay and faience cups. Many will be displayed in the under-construction Grand Egyptian Museum, the first phase of which is expected to be inaugurated later this year.

Archeologists also found a gilded silver mask on the face of a mummy in a badly-damaged wooden coffin. The mask, the first to be discovered since 1939, belongs to a priest.

"The finding of this mask could be called a sensation," Hussein said. "Very few masks of precious metals have been preserved to the present day, because the tombs of most Ancient Egyptian dignitaries were looted in ancient times."

Down the 30-meter-deep shaft is a host of burial chambers carved into the bedrock lining the sides of two hallways. There lie several mummies, wooden coffins and sarcophagi.

"It's only the beginning," added Antiquities Minister Khaled al-Anani. He told reporters that the sites will likely yield more discoveries after further excavation.

Egypt has gone at great length to revive its vital tourism industry, still reeling from the political turmoil that followed a 2011 popular uprising. The Antiquities Ministry has boosted discoveries in recent years in the hopes of bolstering tourism, a major pillar of foreign currency.Menna Zaki