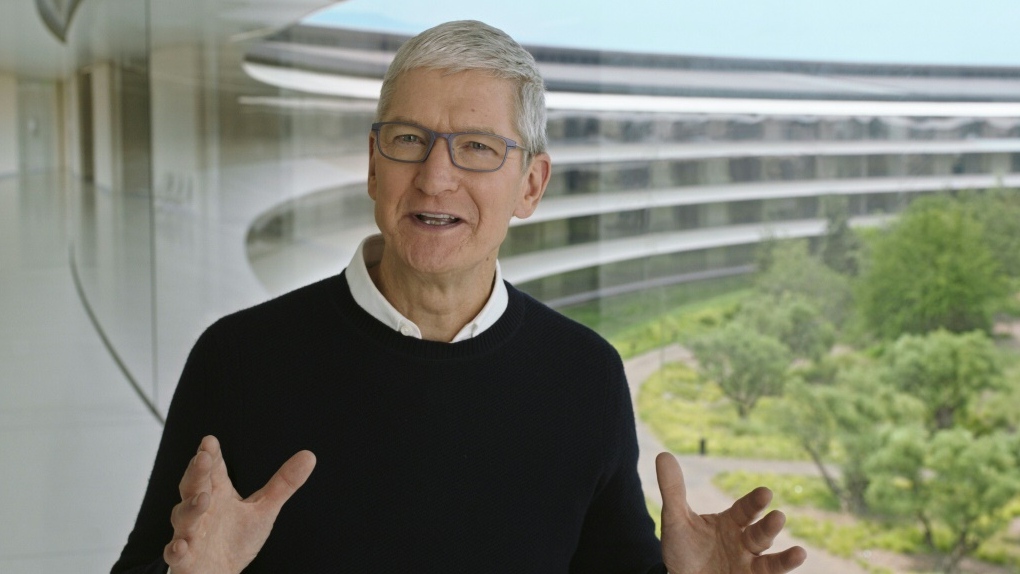 Apple CEO Tim Cook (pictured September 15, 2020 in an Apple Inc handout image) said that wildfires raging on the U.S. West Coast, hurricanes slamming the South, and flooding in the Northeast and Mid-Atlantic make a compelling case for climate change. (AFP)

The disasters should sway those denying science that shows greenhouse gases are dangerously changing weather patterns, Cook said in a talk streamed during an online event by The Atlantic magazine.

Cook reasoned that wildfires raging on the U.S. West Coast, hurricanes slamming the South, and flooding in the Northeast and Mid-Atlantic regions make a compelling case for climate change.

"All of these together, I do believe will convince the people that are not currently convinced about climate change," Cook said.

His remote interview with Atlantic editor-in-chief Jeffrey Goldberg was recorded last week, when smoke from wildfires turned day to night in California and ash fell like snow in some places.

"It's a reminder of how serious climate change is and what's at stake."

Cook declined to answer whether he had any luck convincing U.S. President Donald Trump that climate change is real during any of their conversations, saying those exchanges were private.

"I don't want to talk about it in detail, but if you sort of back up from it, my whole philosophy is engagement," Cook said.

"I think it's even more important to engage when you disagree on something."

Trump suggested global warming will reverse itself and dismissed climate change as a cause of ferocious fires engulfing swathes of the West Coast during a briefing with local officials in California last week.

The president, who flew into Sacramento in central California during a reelection campaign swing, pushed back against state leaders who said that climate change underlies the ever-stronger blazes.

On arrival in McClellan Park, near Sacramento, Trump repeated his argument that the wildfires are due instead to insufficient maintenance of forest areas to make them less combustible.

But at the briefing, California governor Gavin Newsom, a Democrat, countered that the fires are driven mostly by global warming.

"It will start getting cooler. You just watch," Trump insisted to Wade Crowfoot, the head of the California Natural Resources Agency.

The official responded: "I wish science agreed with you."

It was Trump's first visit to California since the devastating blazes began there and in the states of Washington and Oregon.

The Apple chief also said he hoped his testimony in July to a House of Representatives panel investigating market dominance put to rest worries that the iPhone maker wields monopoly power of any sort.

Big Tech executives faced an onslaught of criticism from U.S. lawmakers at the high-stakes antitrust hearing, which could lay the groundwork for tougher regulation of the major internet platforms.

CEOs Cook, Jeff Bezos of Amazon, Mark Zuckerberg of Facebook and Sundar Pichai of Google were grilled for more than five hours in the unprecedented joint appearance -- by video.

"I have no issue at all in Apple being put underneath the microscope," Cook said.

"My hope is that as people heard our story and as they continue to hear our story, that it will become as apparent to them as it is to us that we have no monopoly."

Cook diplomatically responded when asked his thoughts on the response to Covid-19, saying the virus "took the world by surprise" and recounting Apple efforts to help with masks and more.

He said that some 85 per cent of Apple employees are working remotely due to the pandemic, and it remained unclear when they would be able to return to company headquarters in Cupertino, California.