Antarctica's ice sheet is melting 3 times faster than before 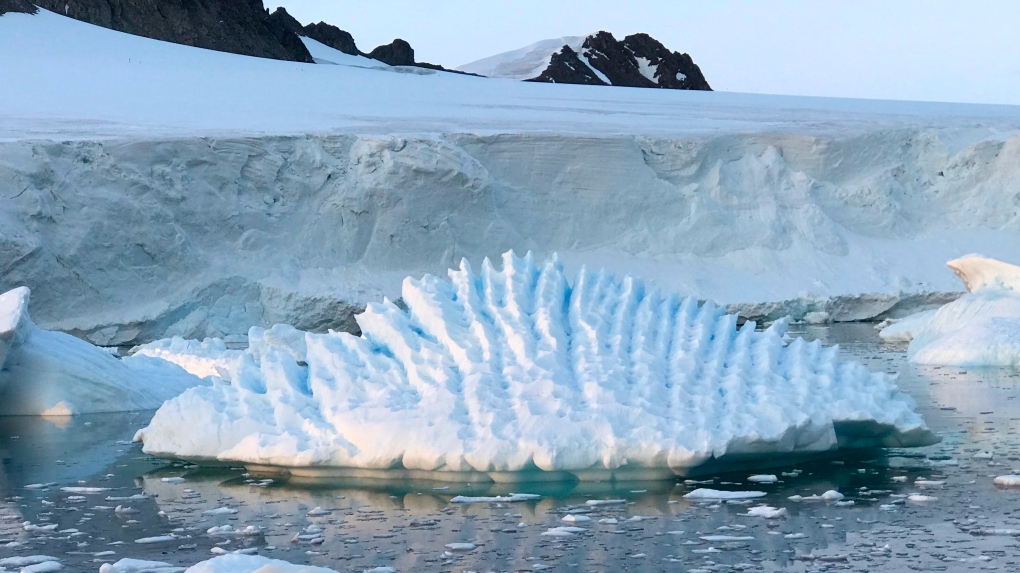 This January 2018 photo provided by researcher Andrew Shepherd shows an unusual iceberg near the Rothera Research Station on the Antarctic Peninsula. (Andrew Shepherd/University of Leeds via AP)

WASHINGTON -- The melting of Antarctica is accelerating at an alarming rate, with about 3 trillion tons of ice disappearing since 1992, an international team of ice experts said in a new study.

In the last quarter century, the southern-most continent's ice sheet -- a key indicator of climate change -- melted into enough water to cover Texas to a depth of nearly 4 metres, scientists calculated. All that water made global oceans rise about 7.6 millimeters.

"I think we should be worried. That doesn't mean we should be desperate," said University of California Irvine's Isabella Velicogna, one of 88 co-authors. "Things are happening. They are happening faster than we expected."

Part of West Antarctica, where most of the melting occurred, "is in a state of collapse," said co-author Ian Joughin of the University of Washington.

The study is the second of assessments planned every several years by a team of scientists working with NASA and the European Space Agency. Their mission is to produce the most comprehensive look at what's happening to the world's vulnerable ice sheets in Antarctica and Greenland.

Outside experts praised the work as authoritative.

Unlike single-measurement studies, this team looks at ice loss in 24 different ways using 10 to 15 satellites, as well as ground and air measurements and computer simulations, said lead author Andrew Shepherd of the University of Leeds in England.

It's possible that Antarctica alone can add about 16 centimetres to sea level rise by the end of the century, Shepherd said. Seas also rise from melting land glaciers elsewhere, Greenland's dwindling ice sheet and the fact that warmer water expands.

"Under natural conditions we don't expect the ice sheet to lose ice at all," Shepherd said. "There are no other plausible signals to be driving this other than climate change."

Shepherd cautioned that this is not a formal study that determines human fingerprints on climate events.

Forces "that are driving these changes are not going to get any better in a warming climate," said University of Colorado ice scientist Waleed Abdalati, a former NASA chief scientist who wasn't part of the study team.

In Antarctica, it's mostly warmer water causing the melt. The water nibbles at the floating edges of ice sheets from below. Warming of the southern ocean is connected to shifting winds, which are connected to global warming from the burning of coal, oil and natural gas, Shepherd said.

More than 70 per cent of the recent melt is in West Antarctica.

So far scientists are not comfortable saying the trend in East Antarctica will continue. It is likely natural variability, not climate change, and East Antarctica is probably going to be stable for a couple decades, said study co-author Joughin.

Another study in Nature on Wednesday found that East Antarctic ice sheet didn't retreat significantly 2 million to 5 million years ago when heat-trapping carbon dioxide levels were similar to what they are now.

Twila Moon, a research scientist at the National Snow and Ice Data Center who wasn't part of the studies, said "ice-speaking, the situation is dire."