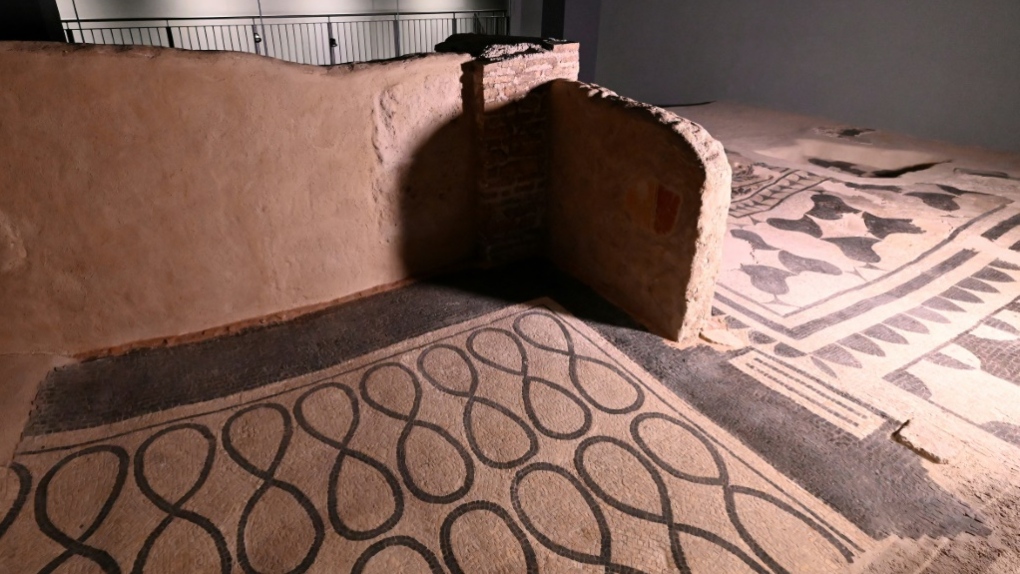 The Roman 'domus,' or home, dates from between the first century BC to the second century AD. (AFP)

ROME, ITALY -- It doesn't look like much from the outside, but a building in central Rome holds a hidden treasure in the basement: the remains of a Roman era home, including elaborate mosaics.

At the entrance of the 1950s building at the foot of Rome's Aventine Hill, all appears normal, with a resident loaded with shopping bags kindly holding the door.

But venture a bit further, and down a short flight of stairs one arrives at the prize, hiding behind an ordinary grey metal door.

It is there where mosaics from a Roman "domus", or home, dating from between the first century BC to the second century AD, are visible.

Ensuing generations of Romans imposed six different levels of floors over the ages until in 2014, the remains were revealed by excavations to transform the former headquarters of the National Bank of Labour into an apartment building after its purchase by French bank BNP Paribas.

"We are here inside an 'archeological box'... an architectural structure having two functions: to protect the mosaics and to allow the public to have access to it," Roberto Narducci, an archaeologist from Rome's Directorate of Cultural Assets, told AFP.

The mosaics depict sinewy vines creeping from pots, black and white geometric patterns, and even a bright green parrot perched atop a branch.

Doors opened to the public on Friday after four years of technologicallycomplex excavation work that was completed in 2018.

"Here we're inside a private building... just where they were planning to build eight garages," Narducci said, smiling.

The garage plan was shelved after an agreement with BNP Paribas, which financed work on the excavations, he said.

A multimedia visit greets the public, using plays of light and a soundtrack punctuated with bird songs to transform the atmosphere once again into the Roman "domus" of a wealthy family.

The light show imposes brightly coloured paintings reminiscent of those of Pompeian villas on the walls, while missing portions of mosaics are replaced as if by magic.

Undoubtedly, the former home better evokes more of its original splendour -- even after the passing of more than 2,000 years -- through the chosen format rather than transforming all elements to a museum.

"We had the opportunity to study several layers of mosaics that were superimposed on each other over the centuries, six in total: from a scientific point of view, this happens very rarely," said Narducci.

During the study of an area of over 2,000 square metres (21,528 square feet), archaeologists unearthed even more finds, some dating back as far as the eighth century BC, including the remains of a military construction that may have been a watchtower. Its foundations are still visible.

And how do the co-owners of the building react to this unusual presence under their feet?

Residents are "proud" of the former Roman home below them, according to Narducci, and they have preferential access when the site is open to the public.

A deal between Rome's cultural assets department and the condominium provides for visits by the public on the first and third Friday of each month, under the supervision of a guide.

"It's true we're inside a residential building, but we are also on an archaeological site where the objects belong to the state," Narducci said.