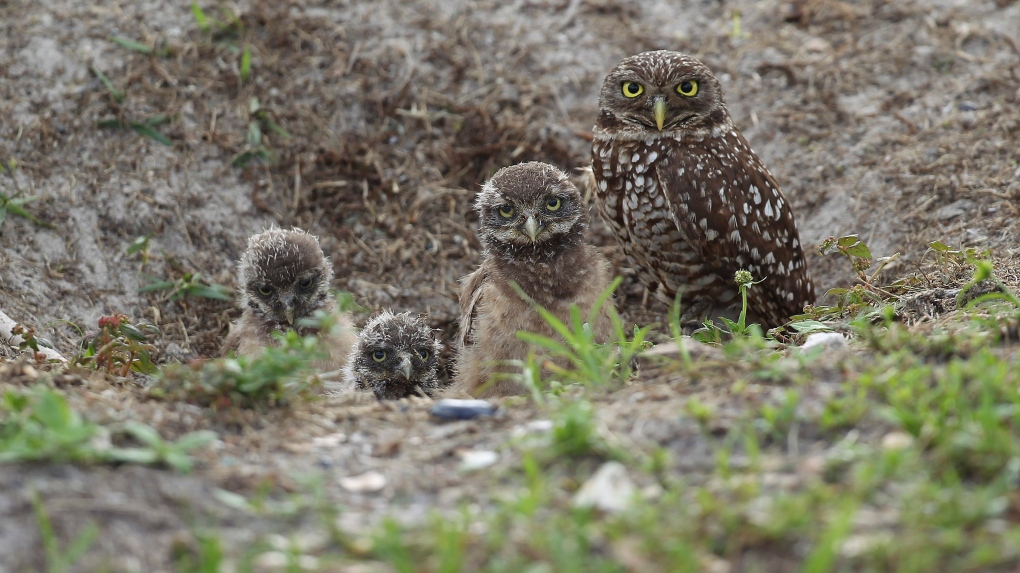 In this May 2, 2012 file photo, a mature burrowing owl and three young chicks sit at the entrance to their nest in Brian Piccalo Park in Pembroke Pines, Fla. (AP Photo/J Pat Carter, File)

So, one island town is letting the birds stay in residents' yards, rent-free. Those humans can then pocket an easy $250 for being generous landlords.

This week, the Marco Island City Council agreed to set aside $5,000 every year to pay residents who host burrows for the vulnerable birds. Wildlife crews will dig the holes, and then it's up to the owls to move in.

About 500 burrowing owls live on Marco Island, but they're exceedingly rare in the rest of the state, said Alli Smith, a biologist with Audubon of the Western Everglades, a conservation group.

Florida's burrowing owls were listed as threatened in 2017 by the Florida Fish and Wildlife Conservation Commission. Historically, the pint-sized birds inhabited the grasslands of central Florida that have been lost to developments and farmland, Smith said.

About 95% of Marco Island's live on vacant lots, Smith said.

Owners looking to build on the lots must get a permit, but then they can remove the burrows, displacing what few owls the state has left. "We're just trying to give them some extra places to live," she said.

The first program of its kind

In the future, the $5,000 grant will be supplemented by fines paid by residents who violate environmental protections.

"Marco Island is the first in the state of Florida to enact a specific program like this, designed to expand the limited habitat of a state-threatened species while rewarding participants who wish to participate voluntarily," Jared Grifoni, vice chairman of the city council, told CNN.

The island's burrowing owls have adapted to their human neighbors, compared to rural burrowers that avoid human contact.

"That's why this new program works for them," he said.

How to dig the perfect owl burrow

Smith and the Audubon squad have hole digging down to a science. The owls don't like being near trees or too close to homes, and digging in some spots could nick a pipe. They also don't like sharing space; one owl family usually owns an entire lot.

Marco Island was largely built above sea level, so their burrows aren't at risk of flooding until summer. By then, the owls will be old enough to fly to safety, she said.

Smith and her squad stick perches near the burrows to mark the entrance and give the owls a place to peer out.

Then comes the waiting.

Since fall 2017, the team has dug out 92 "starter burrows." Owls have visited and lived in about one-third of them, she said. About 14 of the burrows have been "fully excavated" by owls, which means the owls visited, liked it, and built a series of tunnels to establish a permanent residence.

"They're pretty tied to their burrows," she said. "Owls seem to be pretty good architects."

Since the grant was approved, Smith and her staff have been inundated with calls from excited Marco Islanders ready to adopt .

"Most people I've talked to on the phone didn't care about the money," she said. "People just want owls in their yards."