After California killings, what should be done with suspect's social media posts? 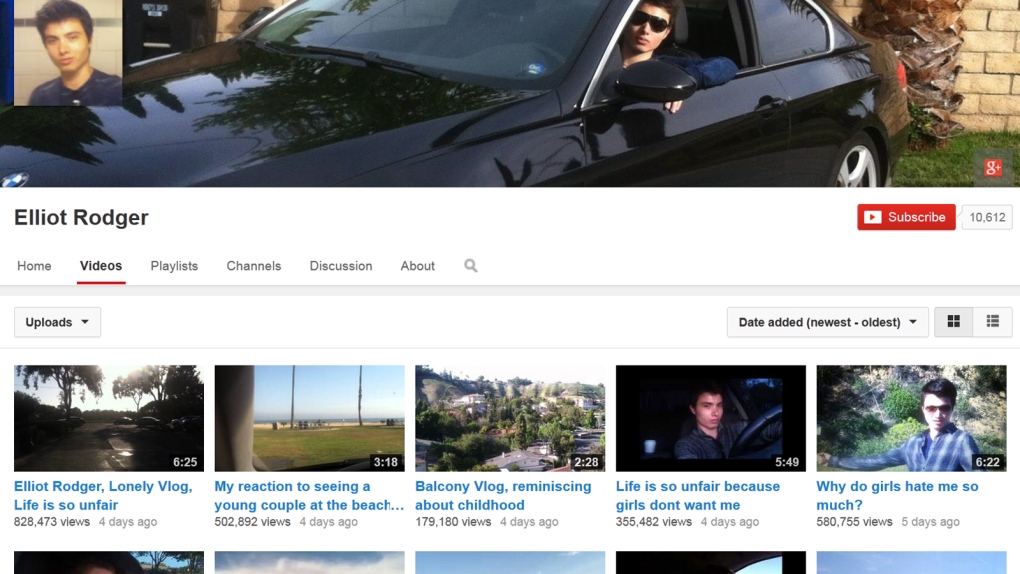 In this screengrab, the YouTube channel believed to belong to Elliot Rodger is pictured on May 28, 2014.

Elliot Rodger, the suspect in last weekend's mass killing in southern California, left behind a digital trail on social media, including several video rants, forum posts and a 140-page manifesto titled "My Twisted World." Now, as the community in Santa Barbara attempts to come to terms with the attack, questions remain over what should happen to those videos and documents.

In the hours following Friday's rampage, YouTube pulled down a video in which Rodger detailed his planned "day of retribution," including his plans to kill women and men in Santa Barbara. The video had been posted before the attack, in which six people were killed, before Rodger took his own life.

His hate-filled rant was removed from his account because it violated YouTube's guidelines, which prohibit, among other things, any content threatening violence.

However, Rodger had posted several other videos to his channel, many of which were still available on the site as of Wednesday morning. Many of the videos feature Rodger talking about the pain and loneliness he says he suffered at the hands of the women who rejected him, and the men they preferred instead.

While Rodger does not advocate violence in the videos, the clips -- with names like "Life is so unfair because girls don't want me" and "Why do girls hate me so much?" -- give viewers a peek into his state of mind in the weeks leading up to the attack.

In response to a query from CTVNews.ca, YouTube said that videos which violate the company's guidelines are removed, with users often flagging questionable content.

"Our hearts go out to the families affected by this terrible news. Videos threatening violence are against YouTube's guidelines and we remove them when they are flagged," a YouTube spokesperson said Monday. "As YouTube is a place where people come for information, where content is posted in a news context, it will be allowed to stay on the site."

It's a decision more and more social media companies are facing: what should be done with the online posts from suspects in major crimes that are being rapidly shared across social media? Furthermore, where do you draw the line when the content is linked to horrific crimes? And who ultimately makes the decision?

But the video that was pulled from YouTube, along with Rodger's remaining videos, have been copied and shared to other channels, garnering hundreds of thousands of views.

Rodger's 140-page manifesto has similarly been shared across the Internet on social media platforms like Scribd.

Dr. Pamela Rutledge, director of the Media Psychology Research Center at the Massachusetts School of Professional Psychology, says that social media can serve multiple roles in high-profile crimes, many which can be positive.

Rutledge, who studies the ways technology can affect human behaviour, said social media can help widen the conversation surrounding a criminal event, beyond the local community in which it occurs.

"In a very profound way, it makes a much broader range of people aware of the issues and the problems (and) the backstory that are often behind these events," she told CTVNews.ca in a phone interview.

"So rather than keeping that information localized, you see it as a product of international discussion. In that sense, it's very positive."

Rutledge notes that since the killings, discussions on mental health, treatment and possible prevention have all been sparked online. Additionally, conversations about misogyny, the so-called "Men's Rights Movement" and gun control have also re-ignited.

Additionally, social media can help a community come together and grieve in ways it couldn't before, she added.

"It allows people to mourn publicly, and to see other people going through the same angst, fear and concern, which is a very important thing," she said, noting that before there wasn't such a public vehicle to share these concerns.

She rejects the notion that social media can inadvertently make a suspect "famous," due to its ability to rapidly and widely spread information, and may inspire others to commit "copycat" crimes.

"Social media is not going to make people behave fundamentally against their character," Rutledge said.

"Would it demonstrate a way of communicating that others might not have thought of? It might. But that doesn't mean it's going to inspire similar outcomes."

And rather than be critical of the publicly available media tools, it would better serve society to look critically at the circumstances surrounding the crime, she argues.

"At the end of the day it's people doing these things, not the tools. We need to spend more time thinking about what it is about our society that allows this type of behaviour to occur," she said.

"But for anybody to come in from the outside and to deem it inappropriate means that we're giving this freedom of communication away," she said.

"I think we have to be very, very careful how we decide who has the right to make judgements about other people's content, because it's easy to give it away and it's hard to get it back," Rutledge said. "Also, everyone has the right to turn off their browser."