A mysterious radio signal detected from space in 2019 is not aliens, scientists say 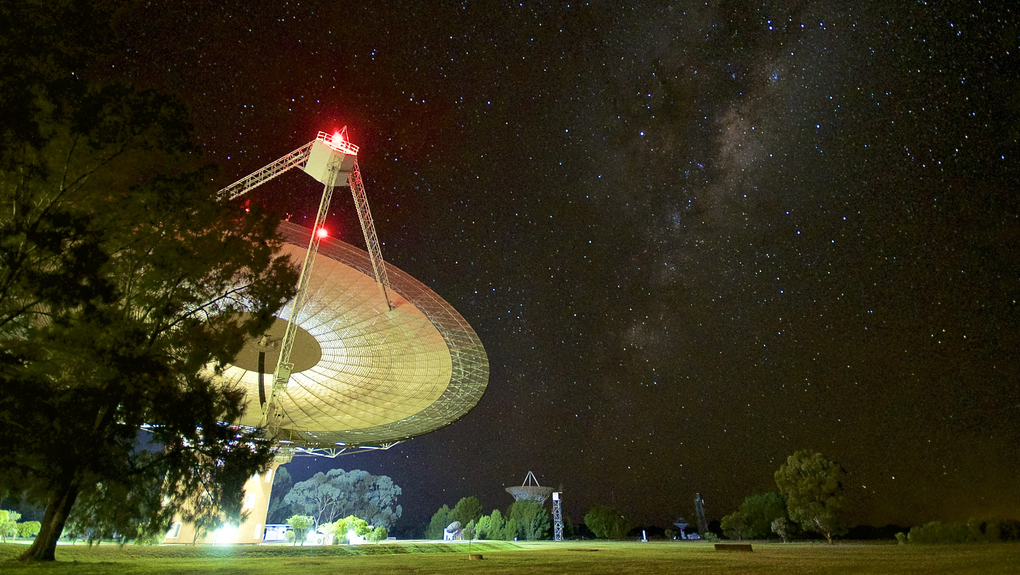 The Parkes observatory is positioned to be isolated from radio frequency interference. The site also sees dark skies in optical light, as seen here in June 2017 with the Milky Way Galaxy overhead. (Daniel John Reardon)

TORONTO -- A mysterious radio signal from a nearby star system that was detected in 2019 isn’t coming from aliens, scientists say.

Instead, the signal was likely caused by interference from Earth, according to two papers published Wednesday in the journal Nature Astronomy.

“It is human-made radio interference from some technology, probably on the surface of the Earth,” Sofia Sheikh, an astronomer at the University of California (UC), Berkeley, and co-author of both papers, said in a Nature article.

Although this means yet another dead end in the search for intelligent life out in space, scientists say that investigating this signal was a promising step that allowed them to hone their skills in finding the origin of signals.

“It’s really valuable for us to have these dry runs,” Jason Wright, an astronomer at Pennsylvania State University in University Park, said in the article. “We need these candidate signals so we can learn how we will deal with them — how to prove they are extraterrestrial or human-made.”

One of the reasons this signal was so promising was because it was the first time that data from Breakthrough Listen — a privately funded project that scans the skies for radio signals from one million of the closest stars to Earth — had passed screening tests to rule out immediate other explanations.

The signal, dubbed “Breakthrough Listen candidate 1” (BLC1), was first detected by Shane Smith, an undergraduate student at Hillsdale College in Michigan, while he was working as a research intern with Breakthrough Listen.

The signal only appeared when the Parkes Murriyang radio telescope was pointed in the direction of Proxima Centauri, the nearest star to our solar system, only 4.2 light-years away.

This was exciting not only because of the apparent proximity of the signal, but because Proxima Centauri’s system has been one of interest for years. The star is orbited by at least two planets, one of which is believed to have the right circumstances for liquid water on its surface, something scientists look for in other planets when searching for signs of life, or environments that could support it.

In the BLC1 data, there were more than four million signals from the vicinity of the star, but one signal lasted for five hours and appeared to come directly from the star itself. It also displayed a draft rate that changed smoothly over time, the way something in a rotational or orbital environment might.

Scientists could not find any explanation that could rule out the signal when it was first identified. The radio frequency matched up with one reserved for aircraft, but scientist couldn’t find any aircraft that had been in the area, particularly for five hours.

However, when researchers pointed the telescope at Proxima Centauri in 2020 and 2021 at the same time of year as the original signal observance, they were unable to pick up the signal again.

The theory is that because the signal didn’t occur again, it likely came from radio frequency interference from malfunctioning technology on Earth that got shut down or fixed. If this is the case, it was likely within a few hundred kilometres of the Parkes telescope, underscoring the importance for simultaneous confirmation of signals using telescopes in other centres.

One thing that this case led to was the creation of a verification “toolkit” for future signals of interest for intelligent life, according to one of the papers. Researchers set out a list of things that need to be done in the event of a mysterious signal, including verifying first that all instrumentation is working correctly, comparing the drift rate evolution of the signal to those of known man-made technology, search for other potential instances of the signal in the archives and search for similar signals at other frequencies, among other steps.

“The Universe gives us a haystack,” Ravi Kopparapu, a planetary scientist at NASA’s Goddard Space Flight Center in Greenbelt, Maryland, said in Nature. “It is our need to find the needle in it, and make sure that it is actually a needle that we found.”